Antonio Gibson was taken in the 3rd round and immediately started contributing to the Washington Football Team. He piled up almost 4.7 yards per carry, 11 touchdowns, and had 10 or more carries in over half of Washington’s games. While Gibson certainly showed some nice burst, and physicality with 2.6 yards after contact, he struggled with zone schemes early on and to be blunt, the Washington line was a mess schematically. The individual players are solid. They got above average play across the line with Morgan Moses, Brandon Scherff, Chase Roullier, and Cornelius Lucas stepping in for Geron Christian. PFF graded them highly and they were an average run team by DVOA, but there’s some concerning things on film.

We’ll start with looking at Antonio Gibson first and his ability and growth as a runner through the season. Washington ran basically every run scheme you can image and that presented a little bit of a problem both in their execution and in the ability for Gibson to grow and learn the system.

This outside zone play is from Week 2 against Arizona. In outside zone schemes, the running back has three steps to decide and five steps to cut from the start of the play. Those numbers are very important. The offensive linemen will also be taking three steps flat before climbing to the second level. The timing and pace of the running back and the offensive line needs to be in sync.

That means the first step needs to be with the running back’s play-side foot because they’re going to be cutting off of that outside foot on the fifth step. Some teams, like Washington does when under center, will use a drop step with the backside foot to get the timing correct. Different teams have different tracks based on small differences in how they run outside or wide zone, but generally the path of the running back is going to be at the outside leg of the tight end. The running back must stay on that track for five steps before the cut. It’s a one-cut system that relies heavily on vision and decisiveness from the running back. The back must trust the system and get four yards.

Already, Gibson is off to a bad start. He has a very small drop step with his back foot, and an elongated front step. The center has their third step in the ground as Gibson is just completing his second step. When he’s on his third step, he needs to have read the first down lineman outside and determined their leverage. If they have sealed outside, he will shift his eyes one lineman inside and again read leverage.

On his third step here, the read is saying that he needs to cut off of his center, #73. The backside of his line has successfully cut the defense in half, he’s stayed on his train tracks to the ghost tight end, but on his fifth step, he hasn’t cut based on the leverage presented. He instead takes two extra steps before he cuts which brings him too tight to the line of scrimmage to be able to cut off of his center’s block. He’s read that the outside is sealed, but hasn’t read correctly for the next defender inside. He tries to stick his nose in and get what yards he can, but it’s the incorrect read and it all started with the footwork at the beginning of the play. 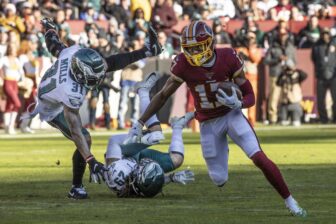 Now, two weeks later, the footwork is much better. His first step is with his play-side foot and he plants to cut on his fifth step. His third step is almost perfectly synced with the center’s and he’s in phase for the run. However, on his fifth step, he hasn’t shifted his vision inside quickly enough and is cutting at an angle that’s too wide. He again should be cutting off of his center’s block with the defense cut in half. Now, he’s two steps late on where the hole should be and defenders are starting to plug. He tries to bounce the play on the cutback, but it’s already too late.

In Week 7 against Dallas, his initial drop step back is more exaggerated which helps him get in phase with the first step of the offensive line. That timing makes a world of difference. When Gibson is on his fifth step now, he’s already decided and is in position to be able to exploit the flow of the defense. He puts his foot in the ground and reads that the edge defender and next defensive lineman inside have both sealed the outside. That means he needs to cut off of his backside guard and get vertical. Since he’s on his outside foot he’s able to cut cleanly and you can see as he hits the gap that one extra step in that position and he’s probably not going to be able to hit the hole. That one step difference gets him into the secondary and into the endzone for a score.

While the zone stuff got ironed out, the gap scheme from Washington was a bit of a mess the entire year. Washington is running a basic guard/tackle counter here. However, the tackle takes way too flat of an angle to be able to wrap through underneath the kickout block. As a result, he runs into the guard in front of him and creates a pile that kills the play and prevents Gibson from running the play correctly. Either his angle was taught incorrectly, or he didn’t anticipate needing to wrap up at a sharper angle. Both are scheme and coaching problems.

That kind of issue happened all season. Back in week two again against the Cardinals, Washington is running the same scheme but with their guard and H-back. The guard is kicking out and the H is wrapping through. However, there are some issues from the frontside offensive linemen. Instead of doubling the 3-technique back to the linebacker, Washington attempts to push the 3-tech onto the tackle first.

That doesn’t make schematic sense. That leaves two free linebackers and only one H-back available. The lack of double teams to the backside linebacker leaves the linebackers free to immediately fit the gap and make the play.

To see more in-depth breakdowns of these gap scheme issues, check out the video above or visit our YouTube channel.

A lack of consistent scheme doesn’t help your rookie running back, but Gibson showed promise and a quick ability to learn and mesh inside of a new system. He developed decisiveness, was able to consistently break tackles, and found ways to produce despite a lackluster scheme around him. The threat of the pass this year with Fitzpatrick will certainly help, but things need to be cleaned up to be able to get the most out of Antonio Gibson. If Washington trims down its run game and develops a scheme identity, some exciting things could start happening in Washington.