Will Stefanski’s winning culture lead the Browns to the Super bowl?

Over the past 20 years, the Cleveland Browns have been a struggling franchise, reaching the playoffs only twice during that time span. They even had a winless season in 2017. However, since the hiring of Andrew Berry and Kevin Stefanski, the Browns are now considered Super Bowl contenders with a winning culture.

From losing to a Winning Culture

The Browns have always been known as a franchise that is accustomed to losing. No matter how talented the roster was, they would constantly find new ways to lose. This past season we saw a different Browns team. They have finally developed a winning culture and it starts with head coach Kevin Stefanski. The Browns’ general manager Andrew Berry clearly made the right decision in hiring him to lead this young team. From the start, Stefanski preached accountability, shared vision, and authentic leadership as the foundation of their culture.

Stefanski implemented several team-building exercises to build chemistry in the locker room. This not only built trust among his players but also encouraged them to buy into his system. Unlike his predecessor Freddie Kitchens, Stefanski provided clear roles for his players, stressed discipline, and showed the ability to adapt. As a result, the Browns made their first playoff berth since 2002. 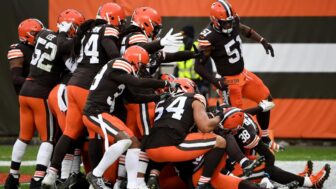 Also Read:
Cleveland Browns Draft Analysis: The Browns are Back

Along with their winning culture, the Browns have rebuilt their offense around the run game. Under Freddie Kitchens, while the Browns were successful with running the football, it wasn’t the core of their offense. Stefanski has used his zone and counter scheme to establish a new identity for the Browns. With Nick Chubb and Kareem Hunt in the backfield, the Browns have one of the best running back combos in the league. This led to the Browns being a top-3 rushing offense in the NFL.

The Browns had one of the most dangerous offenses in the NFL because of their ability to run the football. That opened up the passing game, especially play-action since defenses were focused on stopping Nick Chubb. The counter and zone game fits well with the offense because Stefanski uses that scheme to base his play-action boots. Nick Chubb’s cutting ability, combined with his vision, allows him to break off long runs from counters. Baker Mayfield is a good athlete who is deadly accurate while outside the pocket.

Establishing an identity on defense

While the Browns created an identity on offense around the run game, they struggled defensively last season. They were ranked 21st in the league in total defense and 23rd on 3rd conversions. Even though they had a dynamic offense, the defense struggled to get off the field. The main concern was their secondary, which dealt with a rash of injuries. Their corners struggled in coverage and their safeties failed to limit big plays. The front office was determined to fix this issue and showed their commitment during the offseason.

The Browns are high on second-year safety Grant Delpit who tore his Achilles last season. He was viewed by many draft analysts as a top ten talent but slid to the second round. They were planning to place him at free safety to utilize his ball-hawking skills. Even though he’s best at free safety, Delpit has shown the versatility needed to play in the box.

The Browns are also confident in young corners Denzel Ward and Greedy Williams. Ward is one of the best corners in the league when healthy and Williams has the potential to be a star at the position, however, both have been ravaged by injuries early in their careers. The Browns are hoping that with the additions made in the offseason their secondary will be much improved. Pair that with Myles Garrett and their pass rush and the Browns have the potential to have one of the best defenses in the NFL.

The Cleveland Browns are arguably the most complete football team in the NFL. Last season they demonstrated how dominant they could be on offense. With an improved defense this team has the potential to make a deep postseason run this season. It all started with the winning culture that Kevin Stefanski established in the past offseason. Now it’s time for them to realize their full potential.