Every draft seems to have one player where you watch them and think to yourself, “Wow, we might be watching a possible Hall of Famer”. Usually, it’s a quarterback, but we’ll see the occasional pass rusher pop up every few seasons. This year that guy is Oregon’s Kayvon Thibodeaux. Thibodeaux was a top-rated high school recruit and burst onto the scene at Oregon, winning Pac-12 Defensive Freshman of the Year in 2019. If there’s going to be a non-quarterback taken first overall, put your money on Thibodeaux, whose undeniable talent will attract every team in the league.

When you look at the last two defensive ends who were picked first overall, Jadevon Clowney and Myles Garrett, they had one thing in common, unreal athleticism. They are built like Greek gods but move like an Olympic athlete. Thibodeaux fits that same bill at 6’5″ and 250 pounds and overwhelms offensive linemen in several ways. Thibodeaux’s best game in 2020 was against USC, where he made 2021 first-round pick Alijah Vera-Tucker look like a JV player. Even if he were to not improve from a technical standpoint, his athleticism alone is going to be able to carry him to double-digit sack seasons at the next level. 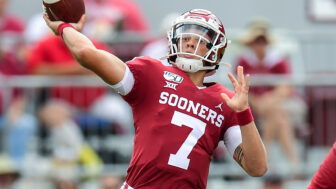 If you blink, you just might miss Thibodeaux. Seriously, his first step off of the ball is insane. Typically he’s going to attack the outside shoulder of the offensive tackle. From there he will either use his speed to stay wide or make one juke to the inside. Either way, he’s very effective in applying pressure and forcing the quarterback into making an early decision. Ultimately sacks are the stats people look for with pass rushers, but the next best thing is quarterback pressures, which Thibodeaux will surely get a ton of.

If Thibodeaux is able to get his hands on you, you’re more than likely going down. Many young pass rushers we see have desirable traits but aren’t refined in terms of bringing down the quarterback or ball carrier. As a freshman playing in a more rotational role, he compiled 9 sacks against some very good tackles. Thibodeaux is also very stout against the run, where he holds his own on the line of scrimmage. You can’t run at him or else he’s going to make a play against the running back. I would expect to see him be an all-around player for years to come.

Thibodeaux is going to grow into his body even more, which is why I’m not worried about this. However, there are times where he tries to use a bull rush and is unable to get much push against offensive linemen. He could very well be stronger at this point as we only got to see a half-season from him in 2020. His strength will develop and might not even be a problem in 2021.

On the few occasions where Thibodeaux wasn’t able to win on his first step or athleticism, he didn’t show a counter move. It happened very rarely, but there were moments where you could tell he still has room to grow as a pass rusher. His athleticism won’t always be there to win him reps, so the more this happens, the more likely he is to develop a well-rounded game.

Kayvon Thibodeaux is currently the top prospect in the 2022 NFL draft and I doubt it will change at any point. He’s as close to a can’t miss prospect as you’re going to see and will be in the running for the first overall pick. I think he compares favorably to Myles Garrett, a former first overall pick and now one of the best defensive players in the league. Thibodeaux has all the athleticism in the world, but backs it up with dominating performances, particularly in big games. I’m interested in his production this year, as other top defensive prospects like Clowney and Garrett didn’t put up the monster numbers you’d expect in their last seasons. Regardless of that, I’m not worried about Thibodeaux. Talents like him don’t come around all that often.