Rookies can often struggle to contribute early in their careers. While it’s hard to project their fantasy impact, here is my list of the top 10 fantasy rookies and one deep sleeper.

Pitts was possibly the most talked-about prospect heading into the draft and has been referred to in some circles as the best tight end prospect to ever come out of college. He has the size to be a serious red zone threat and touchdown machine in Atlanta. Pitts caught 12 TD passes last year from fellow draftee Kyle Trask at Florida. Pitts will be given ample opportunities right away due to the Julio Jones trade and Atlanta being in serious need of a second receiving option behind Calvin Ridley.

Chase is an absolute stud who put up astronomical receiving numbers at the collegiate level in 2019. He opted out of 2020 due to the pandemic, but he is an absolute freak of an athlete. He also gets the bonus of teaming up with his former teammate Joe Burrow. These two had incredible chemistry in 2019, leading LSU to an undefeated national title. The former LSU receiver put up eye-popping stats in 2019, catching 84 balls for 1,780 yards and 20 touchdowns. Chase’s 2019 season will go down in history as one of the best seasons for a receiver in college ever, up there with the likes of Randy Moss back at Marshall.

Cincinnati has two capable receivers in Tee Higgins and Tyler Boyd, but Bengals fans are screaming for a true number one to take the mantle from AJ Green. He has the opportunity, talent, and prior connection with Burrow to flourish right away in year one.

I could copy and paste almost exactly what I wrote for Chase right above into this section about Smith. He too has a prior connection with the QB of his new team. Smith played with Jalen Hurts, the current Eagles starter, at Alabama. Smith had a monster season for the undefeated National Champions last year. The former Alabama man caught 117 passes for 1,856 yards and had 24 touchdowns. I was talking about Chase having the best season ever for a receiver, well Smith topped that in every category, and then some. He can be a PPR stud with how many receptions he will have and is great after the catch.

When you turn on his tape, you’ll see him take numerous short passes and turn them into game-breaking plays. He possesses elite speed and athleticism that will make him a matchup nightmare for any corner. He will also get targeted right away and might already be the number one option in Philly with the receiver depth chart looking a little light. When you combine his talent, opportunity for targets, and familiarity with Hurts, you can almost certainly bet on him to break out and have an immediate impact on this team.

You might notice a theme here of players with prior connections to their QB. Etienne played with new Jags QB Trevor Lawrence at Clemson. Etienne is valuable in the run game, but can be useful in the passing game as well. Last year at Clemson, he had 914 rushing yards and 14 touchdowns to go along with 48 receptions for 588 yards and two more receiving touchdowns. He combined for almost 1,500 yards from scrimmage and was a major part of why Clemson made it to the College Football Playoff last year and won a title in 2019.

Running back is a highly coveted position in fantasy and usually makes up most of the top 10 picks. I am not saying to take him that high, but he is someone that should not be overlooked and would be a great pick for dynasty purposes because he should have loads of production ahead of him in the future.

Harris joins a long list of running backs that have been drafted high and played under Coach Saban at Alabama. He was a huge part of Alabama’s success last year. He, also like Etienne, is a dual-threat runner and receiver out of the backfield. This skill is invaluable in the NFL today, as running backs must be more than just runners. He had an unreal 26 rushing touchdowns last year to go along with four more through the air. That is 30 combined touchdowns in addition to almost 2,000 yards from scrimmage.

Harris will also have the advantage of getting a heavy workload right away with the absence of a true starter for the Steelers after they let James Conner walk in free agency. They will also be relying heavily on the run game to help the passing game this year with almost 40-year-old Ben Roethlisberger not having the arm talent he once had. Just on pure opportunity alone, he is worth taking a shot on. He has the talent and ability to make the opportunities count and I expect him to succeed right away. 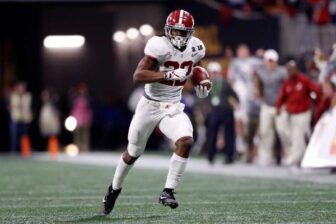 Lawrence has been in the spotlight for three years now since he took over during his freshman year in Clemson, lead them to a title, and never looked back. He has been labeled by some as the best QB prospect ever to come out of college. Lawrence completed 69% of his passes last year and threw for over 3,000 yards. He also had 24 touchdowns and only five interceptions. This all came while missing two games because of contracting COVID.

Lawrence has phenomenal arm talent that had draft evaluators drooling before the draft and was the undisputed number one pick for the Jaguars. He also has some weapons with two young and talented receivers in DJ Chark and Laviska Shenault to go along with college teammate Travis Etienne and breakout performer James Robinson in the backfield. It might seem impossible for him to truly live up to the hype, but he will at minimum make some amazing throws and rack up some solid passing stats while improving Jacksonville significantly. He is also a great QB option for a dynasty league because you could have 10 to 15 years of elite fantasy production ahead of you.

These four guys just missed the cut-off to be considered day one fantasy starters, but they all have the opportunity to develop into quality contributors at some point during the year.

Waddle is coming off a serious injury that caused him to miss the second half of last year. All reports have signaled that he will still have similar speed, agility, and ability to cut on the ankle without issue. He is also helped by his prior connection with current Dolphins QB Tua Tagovailoa, after playing together at Alabama. His stats in college weren’t as eyepopping as previous receivers in this article, but he got better every year. He is one to keep an eye on in later rounds and could eventually be great value for your fantasy roster.

Bateman is a curious case and one that is hard to unpack. He opted out of last year in the summer, then opted back in, played five games, and opted out of the rest of the year. Because of this, his numbers do not look too impressive , but he had a fantastic year in 2019. The former Golden Gopher caught 60 passes for roughly 1,200 yards and 11 touchdowns. He is also going to a place in need of a go-to receiver in Baltimore, as “Hollywood” Brown has not filled that role the way the Ravens hoped he would. Reports have stated he has impressed in training camp and could become a great weapon for Lamar Jackson.

Chicago traded up to get him in the draft, so they clearly like him as the future of the franchise. This all sounds great, but the problem is head coach, Matt Nagy, has already proclaimed Andy Dalton as the week one starter for the Bears. It is only a matter of time before Fields takes the job from him, but we do not know when that will happen and because of that, it makes it difficult to draft him with any confidence this year. He is a dynasty stash at this point and nothing more. He has the dual-threat ability and the potential to be elite in this league. Once he does get the job, there will be no looking back. His immediate fantasy value is hindered by Dalton and ultimately what puts him on the honorable mention list.

Williams is a touchdown machine and he showed that last year by finding the endzone 22 times for North Carolina. 19 of those came on the ground and three through the air. Williams is also going to a team begging for a true bell-cow running back and the North Carolina product could indeed be the workhorse that Denver is looking for. The Broncos back will also be heavily involved in the offense with their current QB situation being a question mark. He is worth a late-round flyer because he could boom just as easily as he could bust this year.

This one hinges completely on the Packers sorting out the Aaron Rodgers situation. I do not have too much confidence in this sleeper pick with Jordan Love as the starter, but if they can convince Aaron Rodgers to stay in Green Bay, he could really be a valuable piece for Green Bay. Amari Rodgers was used to playing under pressure at Clemson and being in big games throughout college. This experience could be invaluable since he is on a team that will be a Super Bowl contender, assuming Aaron Rodgers changes course and returns to Green Bay.