What is Justin Fields’ Fantasy Value?

After the College Football Championship game, Justin Fields was viewed as the second best quarterback in the draft. However, during the draft process, rumors spread that he would begin to slide down the draft board. That slide stopped when he was selected 11th overall by the Chicago Bears. Three quarterbacks were drafted ahead of him. There are several analysts and scouts who believe that he has the potential to be the best quarterback in this draft class. However, head coach Matt Nagy has publicly stated that Andy Dalton will be the Week 1 starter. So, how long will it take for Fields to get meaningful action? What kind of impact will he have in his rookie season? And maybe most importantly for the fantasy risk takers, where should he be placed on fantasy draft boards?

As a fantasy owner, you want to wait until the later rounds to draft a quarterback. Drafting a quarterback like Patrick Mahomes in the first round is more enticing, however fantasy owners should select other positions such as running back and wide receiver with their first picks. You can find other quarterbacks later in the draft with similar production to Mahomes. Dual-threat quarterbacks are attractive because they accrue points both from the air and the ground. Enter Justin Fields. Fields was one of the best dual-threat quarterbacks in college last season. He ran for 1,133 yards and threw for 5,373 yards in 34 college games. When Fields does become the full-time starter, his athleticism will allow him to perform well on the fantasy stage. 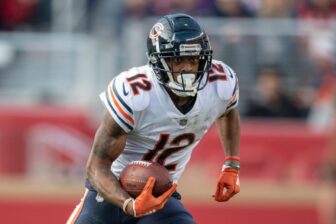 Last season, the Chicago Bears were at their best when Mitchell Tribusky was under center with heavy tight end formations. This allowed the Bears to run the football effectively and made their play action threat more dangerous. However, when they reverted back to a heavy passing offense for Nick Foles, the offensive efficiency plummeted. In order for Fields to be successful in his first season, Matt Nagy must build a new offense tailored to his strengths. It must be balanced, but Justin Fields’ deep ball accuracy should be on display with shots down the field off of play-action.

One of the best ways Fields, can help the Bears is with his deep ball. Since Nagy has arrived to Chicago, their offense has averaged about 6.5 yards per pass attempt. Justin Fields will instantly change that as their new quarterback. He attacks down the field often and connects on a good percentage of his shots. According to Pro Football Focus, on throws of 30-plus yards, Fields had a 95.7 passing grade with 18 touchdowns and 0 interceptions during his tenure at Ohio State. This stat shows that Fields is deadly accurate on those throws and is taking advantage of the right matchups. If the Bears can reestablish the run like they did last season with Tribusky early, that will open up the entire field for Fields and allow him to do what he does best.

Even though Justin Fields is not the Week 1 starter, he will most likely become the starter at some point during the season. Since he will not play right away, Fields may not even be drafted. If you have an extra roster spot to stash him, he will be an immediate contributor on the ground and through the air. Eating up a roster spot for an extended time — especially for a quarter back — is a tough ask. Look to scoop him up on waivers earlier in the season between weeks 3-4 where it should start to become clear whether Andy Dalton is doing enough to keep his job or not. It’s better to be a week early in grabbing Fields than a week late, because he could quickly become a must-start.