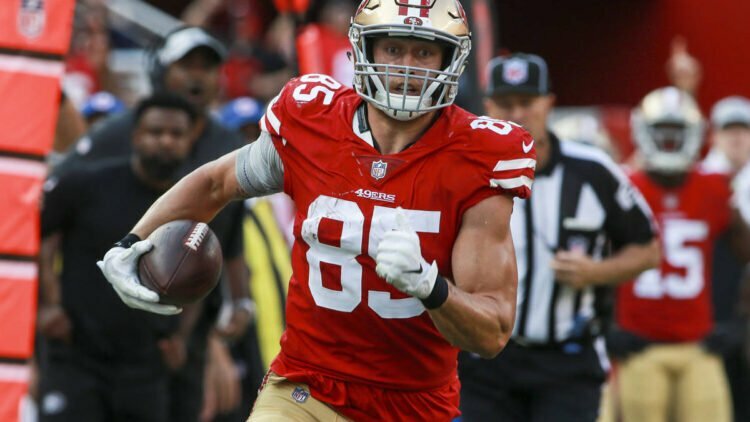 We all know George Kittle is great. He blocks like a madman, he has the speed to win outside, and the physicality to carry people with him after the catch. He’s the most complete tight end in the NFL right now. He’s an incredibly detailed route runner and understands how defenses view him and how Shanahan intends to use him. However, while it might sound crazy to say given that he has averaged 80 yards a game and 10 yards a target over the last three years, George Kittle is being a little misused in the passing game.

Kittle’s game starts with his ability to block. He plays with a great base and leg drive, but can also anchor against defensive ends in the run game or in pass pro.

It’s not hyperbole to say that Kittle can act as a 6th offensive lineman. When he’s on the play-side of the 49ers’ outside zone scheme, he works great off combo blocks and is one of the best in the game at fitting on the second level. In their first game of the year against the Cardinals, Kittle and the offensive tackle, Mike McGlinchey, execute a perfect Trey block on a stretch zone play. The goal of the block is for Kittle to help McGlinchey get his head across on the 5-technique lined up in-between them. While in that process, Kittle also needs to keep his eyes up, because he is working to the Mike linebacker inside. Since it’s an outside run, that linebacker is going to be flowing over the top and Kittle’s block is critical to allowing the play to develop and attack it’s intended aiming point.

Kittle’s hand placement on his initial block is textbook with his outside hand punching up into the armpit of the defender with hip roll and power to create lift on the defender. That lift, gets the down lineman’s outside foot off the ground and reduces the power they’re able to generate while also allowing Kittle to help turn him and for McGlinchey to be able to take over the block.

All of that happens in just three steps, which ties directly to the running back’s footwork on the play. The back needs to decide where he’s running by his third step. If Kittle doesn’t help seal that 5-tech and allow McGlinchey to overtake within three steps, the back is going to work to cut sequentially inside.

After allowing the takeover, Kittle then squares up and fits on the linebacker flowing over the top to the outside run. He continues to drive his feet and creates push which allows for a lane to open up for a pickup of 10 yards.

Kittle’s ability in the run game and blocking can’t be understated and it’s the foundation of how he then gets open. He moves defenders when he attaches to them and gives a huge advantage to the 49ers whether he’s down-blocking, combo-ing up to the second level, or cutting off backside pursuit.

Since he’s such a threat in the run game and blocking in space, defenders have to respect that wherever he’s lined up. Kittle knows that, and works run block releases into his routes to help open himself up.

He’ll use stutter steps off the line to bait defenders into attacking him like he’s run blocking and then use his hands and strength to shed the defender. After working at the point of attack on the stretch zone earlier, Kittle is now running a simple five yard out while attached to the formation. As he comes off the line, he has the same hand position and footwork to bait the defender into coming up. As soon as they engage, Kittle has the base to be able to shed them and immediately get into his route for an easy pickup.

Here, he’s working like he’s on the backside of outside zone and aiming for a cutoff. Instead, he is actually running a whip route. On the snap, he’s looking directly at the safety, who is the guy he would be working to if this was actually a handoff. As soon as he feels the defensive end collapsing down the line in his peripheral vision, Kittle sticks his foot in the ground and whips back outside to the flats and is wide open for a run after catch opportunity.

Use and lack of use off of play-action

Getting Kittle into the flats off these play-action fakes is an easy way to scheme him into space. Shanahan and the 49ers love to work the Sail concept, but Kittle was only involved underneath a handful of times throughout the season. The goal of the play-action Sail concept is to create horizontal flow conflicts with the threat of the outside run one way and then three receivers overloading pass zones the other direction. That usually creates space and schemes easy opportunities for the receivers to run after the catch.

Through the 2020 season, I counted Kittle getting worked in the flats off of outside zone play-action only eight times. That’s just not enough for a guy that’s that talented with the ball in his hands. The 49ers have loaded their roster with guys that can run after the catch with Deebo and Aiyuk as well, but Kittle is a different monster.

It’s not that Kittle can’t win when split out or off of pure drop back concepts, but why make it harder than it has to be? He’s talented enough to win wherever you put him, but sometimes, the easiest solution is the best solution. He could sometimes struggle to get separation and would become overly physical within his routes which got him caught up and off rhythm with the play concept.

Kittle is a monster in the run and pass game. He’s justly at the top of tight end rankings along with Kelce and Waller, but there’s even more opportunities awaiting him in the boot and play-action game. When he’s fully healthy, he’s a problem. He can win anywhere on the field, makes an impact on every play whether he touches the ball or not, and is a huge piece of what will return the 49ers to contention in 2021.