Let’s at the top 10 IDPs for 2021. We’ll look at three players from the defensive line, linebackers, and defensive backfield. There will also be one wild card at the end.

If you’re unfamiliar with how scoring works in IDP, the following is a scoring example from ESPN:

White recorded 129 total tackles in 2020. This included 95 solo tackles, and 34 assisted tackles. He also had nine sacks to go along with a fumble recovery as well.

The biggest thing that stands out from his year last year was the massive leap in his sack totals. He went from two and a half sacks in 2019, to nine in 2020. This is a leap that is probably not sustainable considering Shaq Barrett, JPP, and Lavonte David are also competing for sacks.

His tackles should stay around the same number given the sheer number of opportunities he will get. This defense has some good cover corners and a great safety in Antoine Winfield Jr. and that will give White a few more chances at coverage sacks.

The deeper stat that really plays into his favor for fantasy purposes is the frequency with which the Buccaneers blitz. Todd Bowles, the defensive coordinator has always been known as an aggressive play caller. Tampa led the league and blitzed 268 times last year. This will give more chances to White to rack up extra sacks and tackles. All these things, along with his raw talent, will surely make him a no doubt top 10 IDP pick for fantasy football this year.

The Colts All-Pro had 122 tackles total last year. 93 of those were of the solo variety, and 29 were assisted. He had only two sacks, but that is not his strong suit. The stat that really propelled him in rankings was being tied for 2nd in the league with three forced fumbles.

Leonard has proven to be the number one linebacker in fantasy so far in his career. The stats above don’t do him justice for how good and impactful he really is. He averages 10 tackles a game and that consistency is vital in fantasy football.

The superstar linebacker also has the advantage of playing behind a great defensive line with Denico Autry, Deforest Buckner, and Justin Houston. They ranked around the top 10 all year in pressure percentage, which will force the opposing quarterback into mistakes. Leonard will pounce on those whether with an interception or tackle.

The offense should also be better this year. The two headed monster of Mack and Jonathan Taylor will allow the Colts to move the ball better and score more points. This will force the opposition to play from behind and provide Leonard more chances at big plays when he knows the other team will have to throw. Leonard is a cant miss IDP and should be taken extremely high in any draft.

While Watt’s tackle numbers were low at 37, he recorded 15 sacks along with two forced fumbles.

Watt has a certain cap on his value depending on the specific scoring system your respective league uses. He will not be anywhere near as valuable in a league that values tackles. If your league values sacks though, he is a no brainer top-five pick. He is on a run of three straight years of 14 or more sacks.

Helping him again this year will be the aggressive play calling from defensive coordinator Keith Butler. The Steelers ranked 2nd behind Miami in blitz percentage last year. They were the only team in the league with over 200 recorded pressures last year and Watt had the 3rd most snaps on the field last year for Pittsburgh. Watt is either fantasy gold or just a decent player depending on your scoring. 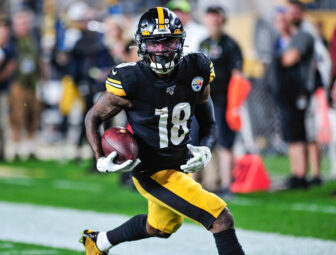 Also Read:
Diontae Johnson and his potential in the new Steelers offense

Garrett had 35 tackles overall, 30 solo and five assisted. What really put him over the top was his 13 sacks and four forced fumbles.

Garrett will have the good fortune of going up against two of the worst offensive lines in the league in his own division. Pittsburgh and Cincinnati did not have good lines last year, and nothing will change in that department this year. He will feast on these two lines four times next year.

Even with limited blitzing from the Browns, Garrett still was able to get 13 sacks. The defense should be better as well with the additions of Jadeveon Clowney, Malik Jackson, and safety John Johnson. The offense should be elite and with that, Garrett will have extra chances at sacks or turnovers. I expect Garrett to be even better this year and compete for the sack title all year long.

Young burst onto the scene last year and made an instant impact on the Washington Football Team. Young plays alongside fellow first rounders Daron Payne, Montez Sweat, and Jonathan Allen. Having these other great pass rushers takes the heat off Young. This allows him to get more one-on-one matchups with offensive lineman than he probably should.

One last thing is the fact that PFF (Pro Football Focus) graded him out as the eighth best edge defender. This high grading, along with some year two growth, will undoubtedly push him higher in rankings and overall stats. He is a must watch on the field, and a must draft in your leagues.

Bosa’s last full year in 2019 though was elite. He had 38 tackles, 31 solo and seven assisted. The Niners star also chipped in 10 sacks and one forced fumble.

We must start this off with the caveat that he is coming back from a torn ACL last year and missed most of the year. Bosa has game-changing ability. The former 2019 defensive rookie of the year will get right back to terrorizing opposing offenses this fall.

The first thing we need to talk about is the fact that he had 11 sacks from the safety position. Most defensive lineman don’t even get that many in a year. He led all safeties last year by a wide margin in the number of times he blitzed. His sack number might seem unsustainably high for a safety, but the chances will be there. His coverage grade was way low, but this is not why you are drafting him. You want the sacks and tackle numbers.

Baker had a whopping 92 solo tackles which led all players at the position. He also chipped in two picks, two forced fumbles, and a sack for good measure.

Budda Baker will give you elite tackling numbers and he earned his highest coverage grade of his career, at 68.9 overall.

The Cardinals as a team blitzed the third most times last year, which will give him ample opportunities for interceptions and passes defended. Baker is one of the players that the Cardinals cannot lose this season. He is a rising star that is only getting better.

Derwin James missed every game last year due to knee surgery. He also missed time in 2019. His last full season was in 2018, but his stats were tremendous. He had 98 total tackles. James also had four sacks, and three interceptions.

This one is a complete dart throw because of his injury history. Early reports out of camp have also said he is back to 100% healthy. This pick comes down to the risk management level of each fantasy owner and what you’re comfortable with.

James had an obscene coverage grade of almost 90 his rookie year in 2018. Even with the injury riddled last two years, James just has too much potential to pass on. If you can stomach the risk as an owner, I truly believe this guy will not make you regret it.

Donald had a typical Donald year last year. He had 31 total tackles last year, 20 solo and 11 assisted. That went along with 15 sacks, and three forced fumbles.

I know what you’re thinking, how can possibly the best player in the league be a wild card? The answer is because in fantasy terms, he doesn’t rack up enough tackles to stack up with other IDP’s. His tackle total is not that high, but the sack number is why he is on this list.

The All-Pro had the highest pass rushing grade last year at 93.6. He also had the most 3rd down pressures in the league. One other deep dive stat was he led the league in what are called “true pass rushes” These plays include a screen pass, play action, designed rollout, or quick throws. They also include when the defense drops eight into coverage, or blitzes five or more. If Donald, can add 10 more tackles, he will be knocking on the door of being the number one defensive lineman.