Cover 0 is an aggressive coverage that is usually tied to heavy blitz packages. It leaves zero deep defenders and utilizes man coverage. It’s a high risk and high reward play. The goal being to pressure the quarterback and force a sack or mistake.

The philosophy of Cover 0 is to create as much pressure and pass protection confusion as possible to disrupt rhythm and timing throws, create a sack, or force a bad pass. While not always paired with blitz packages, Cover 0 does always have zero deep help and use man coverage. By showing all-out blitzes, the defense can force the offense into predictable situations with hot routes and pass protection rules that they can then schematically exploit. Offenses will try to combat Cover 0 with quick hitters, crossing routes, bunch formations, and deep shots.

While there are almost an infinite number of blitz packages off of Cover 0, the most common coverage variation is to drop first and second level defenders into zone coverage. Those players drop to the middle of the field to congest the passing lanes for the offense’s hot routes. This coverage is called Cover 0 Plug.

Cover 0 Plug can drop any player in the front seven in an effort to take away the quick throw from the offense. Often, the defense will play off-man coverage outside so that the offense can’t take a quick deep shot down the field with no safety help. As a result, that leaves space underneath. Cover 0 Plug tries to occupy that space underneath, but at the consequence of bringing less people on the blitz. 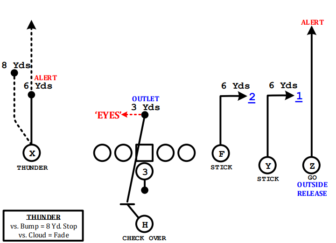 This Cover 0 blitz look from the Chiefs against the Broncos is a great example of the secondary understanding what’s happening up front. The two safeties are deep and disguising the coverage, but are actually in man coverage on the receivers they’re lined up over. With the Broncos in an empty formation, the Chiefs know that they’ll have six rushers for the Broncos’ five blockers and get a free runner. That allows the safeties to play more flat-footed and aggressive since they’re in off coverage at ten yards. They know the ball will need to come out quickly, so the safety to the bottom of the screen jumps the route as soon as the receiver makes their first cut. The pressure gets home and forces the ball to be slightly behind which allows the safety to under cut the route and take the interception back for a touchdown.

Cover 0 isn’t without its risks. If you get beat quickly in man coverage, teams can break off big chunks of yardage on you or take advantage of poor coverage by the secondary. Jalen Hurts and the Eagles here make a quick decision and read the leverage of the corner outside. With the corner on top of the route, he quickly throws a back-shoulder ball before the blitz gets home and scores a touchdown.

Teams will also make defenses pay by running quick screens outside against the off coverage and blitz looks. With almost all the defenders inside, that means nobody is outside to prevent screen passes and quick outlet throws. All those players on the rush now have to change course and chase things down out on the sideline. With a missed tackle outside, that can turn into an easy throw and catch and a big gain.

As mentioned in Cover 0 Plug, defenses will drop guys into coverage after showing a heavy blitz look to take away slant and quick throw windows. That’s what the Dolphins are doing here. They’re showing blitz with everyone at the line and then drop two guys into the slant window. The 49ers want to hit the quick slant over the middle, but the plug from the linebacker takes away that window and the pressure gets home for the sack.

Cover 0 will have similar beaters as Cover 1 or any man coverage, however, the emphasis here is getting the ball out before the blitz gets home. As a result, some longer developing man-beaters won’t have time to get open before the quarterback is sacked. Teams will often run:

Also Read:
Lion Concept
Processing…
Success! You're on the list.
Whoops! There was an error and we couldn't process your subscription. Please reload the page and try again.

Cover 0 brings pressure, big play potential, and forces the offense into predictable route concepts and plays. However, if one player misses a tackle or gets beat in man-coverage, it’s a big play opportunity for the offense. There’s no deep help or extra run support if someone is out of position, but the potential for a sack or errant throw can make the risk worth it.