Are the 49ers better with rookie Trey Lance starting? 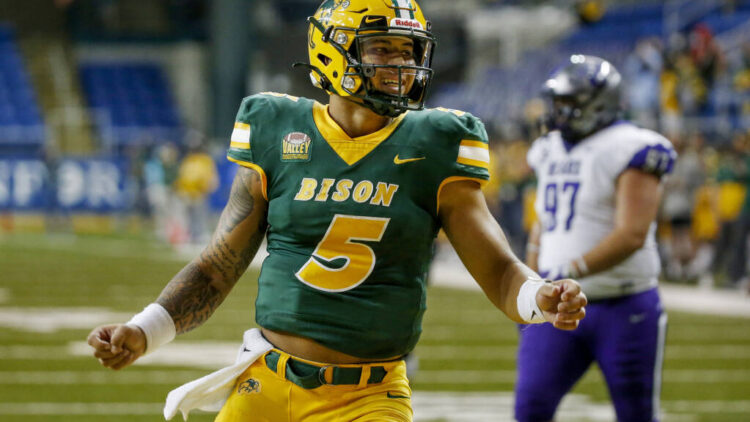 FILE – North Dakota State quarterback Trey Lance celebrates the touchdown run by Hunter Luepke against Central Arkansas in the fourth quarter of an NCAA college football game in Fargo, N.D., in this Saturday, Oct. 3, 2020, file photo. The Atlanta Falcons have their highest pick in the NFL draft since they selected Matt Ryan at No. 3 in 2008. Will they follow the same path by choosing a potential franchise quarterback? (AP Photo/Bruce Kluckhohn, File)

In 2019, the San Francisco 49ers were 8 minutes away from winning their 6th Super Bowl. They then went into last season with the 4th best odds to win the Super Bowl. While they do have one of the most talented rosters in football, their season was devastated by injuries. Starting quarterback Jimmy Garropolo is especially injury-prone. When under center he has proven that he can win games, but he has missed 23 games in the past three seasons. With the 49ers key players returning, can they rely on Garropolo to stay healthy? This is where Trey Lance comes in. 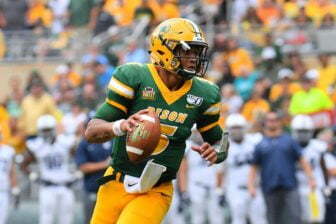 The San Francisco 49ers traded two future first-round picks to get into the 3rd overall slot. With that pick, they selected Trey Lance out of North Dakota State. Many pundits and scouts viewed Lance as a prospect with immense potential who could have the highest ceiling in the draft. While top pick Trevor Lawrence was the consensus best quarterback in this class, Lance wasn’t far behind. In his 17 games with the Bison, he threw 28 touchdowns to 0 interceptions. Coaches and scouts were most impressed with his ability to handle the pre-snap responsibilities. Unlike most college quarterbacks, Lance was asked to call out plays, make audibles based on coverages, and change protection schemes. That’s one of the main reasons why the 49ers believed that he is the most pro-ready quarterback in the draft. However, there are questions about his inexperience and the level of competition that he played in college. Still, Trey Lance is an incredible talent and has a chance to be the Niners’ franchise quarterback in the near future.

Although Jimmy Garoppolo has been injury prone for the majority of his career, he is 24-8 as a starter. In 2019, he led the 49ers to the best record in the NFC conference. Garoppolo also led the team to the Super Bowl, but lost to the Kansas City Cheifs. With the majority of that dynamic roster returning this season, Garoppolo will most likely help them win their division and return to the playoffs. Garoppolo has the edge on Lance mostly because of his experience. However, if he struggles to begin the season, it wouldn’t be surprising if the front office gave Trey Lance a shot.

How Trey Lance will change the offense

While Garoppolo has proven to be a winner in this league, he does have limitations as a quarterback. Kyle Shanahan’s offensive system is normally based off getting the quarterback on the move via bootlegs and rollouts. However, Garoppolo is not very mobile. Trey Lance was one of the best dual threat quarterbacks in college football. Under Lance, Shanahan will be able to expand his playbook. He can introduce read options, utilize more RPOs, and other wrinkles in the offense because of Lance’s explosiveness and versatility. Trey Lance doesn’t have the experience of Garoppolo, but he is certainly the most promising between the two. While he does have a high football IQ, he will definitely have some rookie moments when he plays. Despite that, the 49ers offense can be more unpredictable with Lance as the starter which could make them more dangerous as a football team.

The NFC West is one of the toughest divisions in football. Every year at least three of those teams have been competing for playoffs spots. Garoppolo’s intangibles and experience will be the best way for the 49ers to compete for a championship in 2021. However, their offense would be more exciting with Lance as the starter and could give a spark to the team. The front office seems to be leaning towards Garoppolo, but their future is very bright with Trey Lance in the fray.