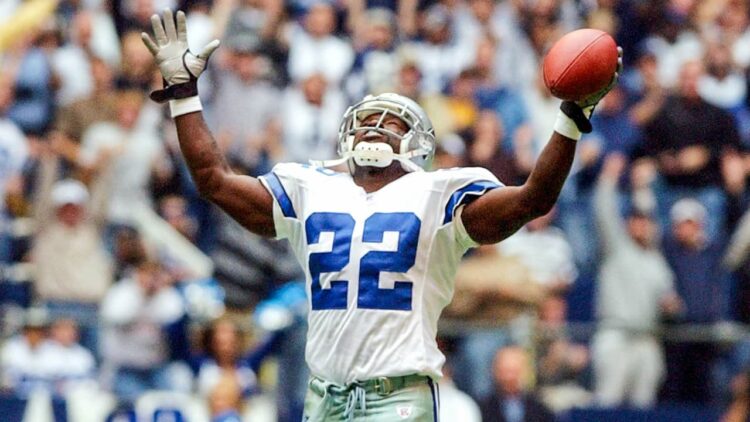 There are perhaps no two players whose careers are more different than that of Barry Sanders and Emmitt Smith. Sanders was an unstoppable force for a struggling Detroit team and Smith served as one third of the Cowboys’ famous Super Bowl winning “Triplets”. One career was abruptly cut short while the other dragged on ’til the final snap. Comparing these two Hall of Fame backs can be difficult ,but one will reign above the other. Its Barry Sanders vs Emmitt Smith in the first edition of the “GOAT” Chronicles.

In his 10 seasons, Barry Sanders was one of the most efficient backs in the league. Averaging a strong five yards per carry and 99.8 yards a game, Sanders single handedly carried Detroit’s offense for a decade. In fact, his rookie season saw him post 1,470 rushing yards and 14 rushing touchdowns. He never dipped under 1,100 yards the rest of his career. While he did have some down years in the touchdown department, scoring only three times in 1993 and four times in 1998, his four-season peak from 1994-1997 saw the Lion’s legend join the 2,000-yard club, average 10 touchdowns a season, and never miss a game. As with many running backs during this era, his receiving skills left something to be desired. He averaged only 19 receiving yards a game. While his career was cut short, Sanders is arguably the most dominant regular season back of all time.

Meanwhile, Emmitt Smith carried the football for 15 seasons. Sanders was a better pure ball carrier as his 5.0 yards a carry trump Smith’s 4.2, but Smith was one of the leagues’ best scorers. From 1990-1996 Smith found the endzone an absurd 108 times plus another seven receiving touchdowns. For comparison, Sanders scored a combined 109 times across his 10 seasons. What is most impressive is that despite averaging 293 carries over 15 years, Smith was almost never hurt. He played in 226 games of a possible 240 and most of those were in 2003 when he missed six games. Lastly, Smith was an even less impressive receiver than Sanders as he averaged only 14 receiving yards a game and only two catches per contest. 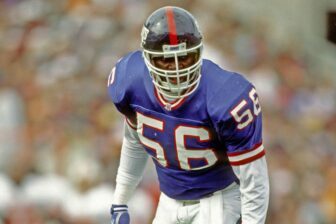 Emmitt has the advantage in terms of longevity and his ability to find the endzone, but Barry is tied for 6th all time in yards per carry, is one of eight members in the 2,000 yards club, and averaged 100 yards per game in his career. If you need someone to carry the football, there might be no better option in history than the Detroit legend.

Few players are more decorated in the history of the NFL than Emmitt Smith. At a glance, he has three Super Bowl rings, a league MVP in 1993, a Super Bowl MVP, holds records for the most rushing yards, touchdownsm and carries in league historym and was inducted to the Hall of Fame in 2010. Smith was perennially viewed as one of the best backs in the league from 1990-1999, where he found himself being named an All-Pro four times and Pro-Bowler eight times. Unfortunately, some of the luster from his prime was diminished by the final four seasons of his career. His award-winning prowess being all but non-existent near the end, Smith suffers from a decline that did not hamper Sanders who remained elite until his last carry.

Sanders’s awards are tied much more heavily to his regular season dominance. He was also the league MVP in 1997 as well as the Offensive Player of the Year in ’94 and ’97. His ’97 season was one of the greatest single seasons of all time. He averaged 128 yards per game on his way to the third ever 2,000 rushing yard season. He also had 10 straight years of Pro-Bowl nominations and six First Team All Pro nods. All this plus four rushing titles led to a well-deserved Hall of Fame induction in 2004. Yet, the questions remain; what more could Sanders have accomplished had he played a few more seasons? Perhaps he could have taken Emmitt’s rushing yards crown or added another 2,000-yard season. We will never know.

Sanders may have never missed a Pro-Bowl and has two Offensive Player of the Year awards as well, but he can’t compete with Smith’s rings and all-time records. Emmitt has filled his resume with almost every possible award a running back can earn.

Unfortunately, this is the most lopsided comparison between these two. In his third season, Sanders would win his first playoff game. Across two contests he managed 113 yards and a touchdown. His lone win in 1991 would be his last as his next four playoff appearances resulted in losses. Losses that highlighted some of Sander’s worst ever performances. In 1994 he managed 13 carries for -1 yards. In 1995 he was ineffective to the tune of 10 touches and 40 rushing yards. For a player that was unstoppable during the regular season, his lack of playoff success is jarring. This was most likely due to Detroit’s lack of overall talent that made Sanders the focal point of defensive game plans.

Smith on the other hand, was a dominant playoff performer. He was a winner of back-to-back Super Bowls in 1992 and 1993 and he was Super Bowl MVP in ’93 having averaged 93 yards a game during the Cowboys playoff run. He finished his playoff career as the all-time leader in playoff rushing yards and touchdowns. Smith would win another Super Bowl in ’95 and averaged over one touchdown a game. Smith was arguably the best playoff performer on a team that was loaded with Hall of Fame talent. That speaks volumes.

This one is easy. One player has rings and records. The other drastically underperformed and piled up losses. The Cowboys legend couldn’t be stopped when the lights were brightest.

This is another lopsided category. Smith was a key member of one of the league’s most potent trios during the Cowboys run through the 90s. The “Triplets” included Smith, wide receiver Michael Irvin, and quarterback Troy Aikman. From 1992-1995 Irvin was one of the league’s best receivers; averaging 1,418 yards and 90 receptions per year. Aikman was a six-time Pro-Bowl player who guided the Cowboys to a 53-19 record from ’91-’95 and is also in the Hall of Fame. Smith also shared the field with other standout players such as Larry Allen and Deion Sanders. In 1996, for example, the Cowboys fielded eight Pro-Bowl players, four of which were on the offensive line.

In comparison, Barry Sanders played with much less talent. During the ’96 seasons that saw Dallas produce eight Pro-Bowl players, Detroit managed two, one of which was Sanders. Wide receiver Herman Moore and left tackle Lomas Brown may have been the two best players Sanders ever suited up with. Neither is in the Hall of Fame. Brown managed one All-Pro appearance while Moore ascended quickly from 1994 through 1997, but quickly faded after his four-year peak. Sanders was quite literally carrying not just the ball, but the franchise on his back.

The reality is Sanders was never remotely supported the way Smith was. Smith played with some of the greatest of all time. Sanders was mostly a one-man team who was forced to play with quarterbacks such as Rodney Peete and Scott Mitchell. The damage Sanders could have caused behind an elite offensive line such as the Cowboys is scary to think about. Sanders gets the nod here for doing as much as he did with so little support.

Sanders and Smith are two all-time running backs with vastly different careers. Smith took the field alongside elite talent and played as long as he possibly could in his quest to secure his place in the record books. Sanders was mostly on his own, forced to will his team to success with limited support. For those who value championships and trophy cases above all else, they may find Smith’s career the more impressive of the two. But, when it comes to a position such as running back — one that is dependent on so many others — it is impossible to ignore the decade of dominance that took place in Detroit. Barry Sanders’ rushing numbers, efficiency, and consistent ability to do more with less makes Sanders arguably the greatest pure rusher in NFL history.