The top offensive coordinators in the NFL

Offense rules the world in the NFL. It’s a cat and mouse game. Coordinators are trying to isolate their best against the defense’s worst – whether by formation, play design, or personnel packages.

Here are three of my favorite (but not necessarily the best) offenses and the coordinators that run them. Their systems match most closely to what I believe in. All three do an excellent job at creating favorable matchups and putting their guys in the right position to succeed.

I love Stefanski for his run game. He’s pretty versatile and dynamic and implements both zone and gap scheme. The Browns have two dynamic backs, an incredibly athletic offensive line, and a quarterback that generally does a little better outside of the pocket with a clear vision of the field.

As a result, Stefanski uses both Chubb and Hunt in different ways, gets Baker on the move, and challenges his offensive linemen with athletic blocking schemes. His linemen have to be mobile enough to climb in space, powerful enough to kick out on pulls, and quick enough to get to their spot in time.

He uses receivers on crack blocks even if they aren’t typically thought of as run blockers, balances his use of motion, and even uses his tackles on Dart schemes with only the tackle pulling which you almost never see at the NFL level. It’s a long distance for those guys to go, but it’s a change-of-pace look and messes with linebacker read keys.

Stefanski has every kind of counter combination you can think of as well. Guard/tackle, H/guard, fullback/guard, receiver/guard, any combination and he’s probably done it. When everyone can contribute to the run game, it makes it tough for defenses to protect against the pass game. He also uses some great counters in the passing game to hold defenses accountable.

Joe Brady is early in his career – especially in the NFL – but I loved what he did with the Carolina Panthers last year. Partially by design and partially by personnel, Brady had the Panthers running a spread attack with Teddy Bridgewater at the helm. They had a ton of speed at the skill positions with Robby Anderson, DJ Moore, Curtis Samuel, and Christian McCaffrey, but they had a quarterback that was… not a guy that would typically throw deep. So how can you leverage all that speed and talent outside with a quarterback that doesn’t push the ball downfield? Joe Brady’s solution was to spread the defense out and create horizontal stretches. Tod that, he used underneath drags, digs, and options in the flats. That let Bridgewater stay in his comfort zone while continuing to move the offense.

Brady’s scheme utilized every inch of the field both by formation and play design. He’d use outside zone and quick pitches, jet sweeps, and a ton of empty formations. That would force defenses to line up and let Bridgewater read the space available to him.

Brady used pread formations and concepts, but also tied in some of his RPOs from his time at LSU. I love his use of those routes and concepts because it’s simple and gives the quarterback easy reads. Shallow drags work across the field and force defenses to either transfer zones or to run with the speed of the Panthers’ talented receiving group. Those routes also created short throws. Throws on crossers and digs also shortened the distance of the throw needed from Bridgewater. It sounds intuitive, but an in-breaker at 10 yards is obviously a much shorter throw than a sail route breaking away outside.

I thought that the formation abundance and ways that he got to empty, his ability to tailor the offense to fit Bridgewater’s ability while still utilizing the speed of the Panthers receivers, and how he tied in ways to get to simple screens and RPOs were a huge benefit to the Panther offense.

Lastly, we have Matt LaFleur. LaFleur gets overlooked a lot in the conversation about top offensive coordinators because of who he has behind center – at least for this year. Aaron Rodgers makes everything look a hell of a lot nicer and more explosive. However, LaFleur blends multiple trees and concepts into one branch really well. LaFleur’s (and most of the Shanahan systems) feel the most intuitive and linear. There is a ton of nuance going on and each play builds upon itself.

LaFleur’s offense is like a movie – if you see a sword in a house early on in the movie, you can bet your ass that sword is going to come into play later on. Everything LaFleur does is intentional. He has found a way to implement RPOs, air raid concepts, and the wide zone and boot game all into one umbrella. RPOs use Rodgers’ pre-snap cognition to identify weaknesses in the defense, the air raid concepts give some more tools and schemes to attack defenses, and the wide zone boot game creates immense horizontal flow conflict.

Giving Rodgers the flexibility on RPOs is a huge boost to the Packers run and pass game. It holds defenses accountable and is something that you don’t see quite as much in other wide zone offenses. Typically, those teams will be under center, which takes away the RPO. However, LaFleur uses access throws and outlet options outside that can be thrown from under center to hold outside defenders accountable. 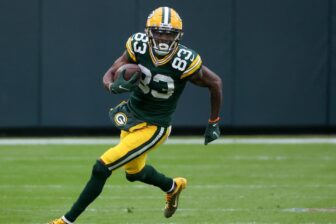 He uses the Mesh concept out of every formation and personnel grouping you could imagine and leans on it a ton against man coverage. The Packers have superb blockers outside with Allen Lazard and Marquez Valdes-Scantling, and LaFleur will often cut the splits of those guys to help in the run game. That helps him to add gaps in run schemes and work play-action off of it even more effectively. If you have guys that can block and that often come inside, it’s way easier to sell that they’re blocking when you fake off of it and get them into the flats or running across the field.

As with Joe Brady, the LaFleur offense uses a ton of shallow drags, deep crosses, digs, and posts, which attack the middle of the field. Those are higher percentage throws which makes life easier for the quarterback. Those routes tie directly into targeting linebackers and forcing defenders to stay sound in their pass coverage despite the temptation of the run game.

These three guys are some of my favorites to watch. Some of them have more success than others, but they’re all new at their positions. The ideas they brought with them have been huge for their team’s success. If they keep on cooking and dialing things up, the sky is the limit for every one of those offenses.