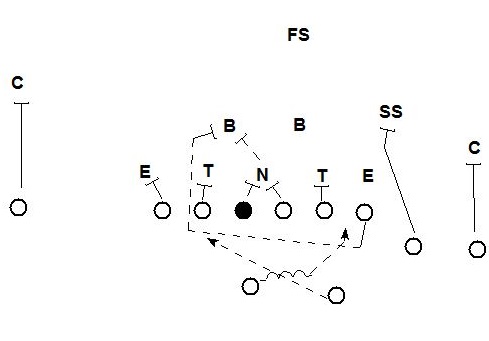 Dart is a gap scheme play that operates similarly to power, except with the tackle pulling instead of the guard. It takes an athletic tackle to be able to pull across the formation, but Dart adds variation to run schemes and can get an extra lineman to the play-side.

Dart is a great change-of-pace to zone schemes and is often run at the 1-technique. It utilizes similar blocking rules as power or counter. Dart is an easy addition for teams that already utilize gap scheme runs.

The Browns frequently used Jedrick Wills on their Dart plays. He was athletic and big enough to get across the formation and up to the second level. The Browns are running Dart with a tight end and are facing an odd front with five players at the line of scrimmage.

The tight end is now taking the play-side tackle’s job and is base blocking the end man on the line of scrimmage. That leaves the PST to down block on the 4i inside of him with the PSG. That PSG also knows that he has to ultimately work to the first linebacker backside which is #57 of the Bengals. He helps on the initial block with the PST and then gets up to the linebacker. That leaves the center and BSG sealing the backside A-gap to prevent penetration. The BST is wrapping through between the tight end and PST to get the play-side linebacker.

Teams will occasionally try to kick out with their tackle rather than wrapping them through, but that makes it a tough block for the BST. The distance is far greater, the end that’s getting kicked out can squeeze down the hole, and the defense can recognize the oncoming kickout before it gets there. Since the BST is kicking out, that frees the tight end to immediately climb to the play-side linebacker. The rest of the offensive line does a good job down-blocking and getting onto the second level, but the pulling tackle misses the end on his kickout block and that disrupts the play.

Also Read:
Cover 4
Processing…
Success! You're on the list.
Whoops! There was an error and we couldn't process your subscription. Please reload the page and try again.

Dart is great if you have an athletic tackle. It gives the defense a different look and with the backside guard staying in, it prevents some of the penetration and run-through that you get from power or counter. Dart is a good solution and wrinkle for zone scheme teams and offenses that are having problems with penetration in their other gap scheme plays.