The Verticals concept is exactly as its name describes. The concept uses vertical routes to overload deep zones from the defense. It also has small variations against different coverage shells that allow it to be effective against multiple defensive looks.

The goal of the Verticals concept is to create horizontal reads on the safety and a vertical stretch on any underneath linebackers. That is done with by getting one eligible receiver into the flats and sending the rest deep. The route combinations are:

Out of a balanced formation with two receivers on either side, the quarterback will read:

The Giants are getting a single safety look here, which means Daniel Jones will be reading the two seams. Those routes are creating a vertical stretch on the free safety in the middle. He also has the option of taking a shot on one of the fades outside if there is a favorable matchup. Jones sees that the safety is on the far hash and throws on rhythm to the opposite seam away from the safety for the completion.

Here, Washington is getting a single safety look as well. The shallow drag from the running back now pulls a linebacker up to open the seam window before the safety. The cross seam from the tight end holds the safety in the middle of the field and prevents them from keying on the #2 receiver. 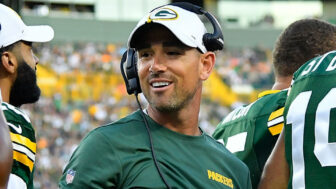 Also Read:
The top offensive coordinators in the NFL

When a team doesn’t have a shallow route to pull underneath defenders up, five verticals can become crowded and defenders can easily fall off their receivers. That is especially true in the tight redzone. Here, Trubisky tries to back-shoulder this throw to his seam inside away from the defender. Since there’s a fade right next to it in a condensed area of the field, the outside corner is able to come off and intercept the ball.

Utilizing five verts takes a lot of field space and an almost perfect throw with so many defenders in the same area.

The Verticals concept stresses deep zones horizontally and gives the offense an opportunity for a big play. Holding underneath defenders with a shallow drag can open up windows before the safety. Five verticals can force an advantageous matchup with a linebacker on a skill player – the window is just condensed with more defenders in the area.