Why the Vic Fangio scheme is sweeping the NFL

There’s a hot not-so-new scheme circulating on the defensive side of the ball in the NFL. That scheme stems from Vic Fangio. Fangio had great success in his time with the Bears which led him to being hired as the head coach for the Denver Broncos. That eventually spawned Brandon Staley, who worked as a linebackers coach with Fangio in both Chicago and Denver. He then joined Sean McVay in Los Angeles as the Rams’ defensive coordinator and is now the Chargers’ head coach. The Fangio and Staley influence doesn’t stop there. The Green Bay Packers hired Joe Barry who was the linebackers coach with the Rams under Staley and the Bears have promoted Sean Desai who spent four seasons with Fangio before he left for Denver.

A lot of the success and proliferation started with Fangio’s time with the 49ers and Bears. Vic Fangio has been running a variation of his defense for his 24-year career in the NFL. Brandon Staley brought the scheme back to the main stage with the Rams in 2020 where he had the number one defense in the NFL by weighted DVOA. 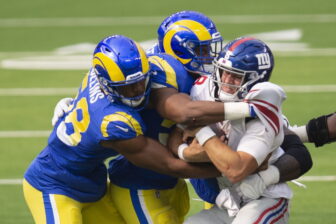 Fangio’s defense doesn’t blitz much – nor does Staley or any of the Fangio disciples. He operates predominantly out of a two-safety shell. However, he uses that template to roll into different coverages and disguise what he’s doing in the secondary. With two deep safeties, though, that takes a player out of the box and can stress the run game. That’s why his fronts and the safety position is a critical piece in Fangio’s and Staley’s defenses. Those safeties have run responsibility and tend to play closer to the line of scrimmage than safeties normally do in the NFL. That allows them to more immediately contribute, but they also have to be athletic enough to recover from run reads and still be able to cover deep.

Up front, Vic Fangio and Brandon Staley tailor things to fit their personnel. Staley has used a lot of tite fronts to help free guys up for one-on-ones outside or in the middle. Using those odd fronts or 4-3 under fronts allows him to kick normal defensive ends inside to work on guards instead of tackles.

Here, Fangio is using 3-4 personnel and creating a 4-3 under. While Fangio is showing five players at the line of scrimmage, outside linebacker Bradley Chubb is actually dropping as a zone defender.

Chubb is the strong outside linebacker and is jamming the tight end before dropping back into coverage. The weakside outside linebacker is the rush end and is getting a one-on-one with the tackle on the other side. With the nose shaded to the right and an end outside the tackle, the Titans are forced to commit four linemen to those two players. That creates two separate one-on-ones for the Broncos with their 3-tech and weak outside linebacker. Those one-on-ones are created by the front despite the Broncos only rushing four against the Titans who are keeping seven in pass protection.

Those kinds of fronts are a staple of what Fangio and Staley do on defense. You can see how similar the set-up is here for the Rams against the 49ers. They also have a nose shade with two defensive tackles inside leverage of the offensive tackles and a strong outside linebacker on the right to the tight end.

On this play, you can see the safety and their run fit responsibility. They’re coming from depth but filling off of the defensive tackle to the right. When he gets hooked and controls the backside C-gap, the safety is responsible to fill inside in the B-gap with the nose occupying two blockers in the A. Aaron Donald has a one-on-one to the play-side and forces the running back inside to the filling safety. The front has created advantageous matchups while still maintaining two deep defenders to protect against the pass.

Staley especially used a lot of varied personnel when giving similar tite or 4-3 under looks. He’d walk down linebackers over the center or in the B-gaps to show heavy pressure and then have those linebackers bail into zone overage. He’d also use a variety of twists and stunts off of those looks.

Behind those fronts, as mentioned, both Fangio and Staley run a lot of two-safety shells. That doesn’t mean they’re always running Cover 2, Cover 4 though. They often use that shell to disguise and move secondary players around to give varied looks post-snap. Here, Staley is ultimately getting to a Tampa 2 look, but doing it in a very unique way. He is rotating one safety to cover for a cat blitz from the corner, bumping the other safety over, and then backing up the trips-side nickel. That disguise is then matched with what the Rams are doing at the line of scrimmage. Linebackers are bailing and there is a corner blitz to cause confusion, but ultimately only four defenders are rushing the passer.

While he does it less, Fangio also likes to do similar things with his safeties and bump them around the field to be able to rob the middle, give coverage illusions, and double players on the opposing offense.

Also Read:
Cover 3
Processing…
Success! You're on the list.
Whoops! There was an error and we couldn't process your subscription. Please reload the page and try again.

Vic Fangio is huge on zone coverage and moving players around and that allows the secondary to make plays on the ball. He likes his safeties to be interchangeable and flexible so he can be more unpredictable. His scheme implements some man-coverage principles and creates a lot of versatility in his defensive calls. Both Staley and Fangio need dynamic players to really make the scheme work, but when the horses are there, it’s a difficult defense to prepare for. The versatility of the fronts and coverage behind it make it difficult for offenses to game plan. From similar pre-snap looks they can change what they focus on taking away from week-to-week. If Joe Barry and Sean Desai put together good units, the Fangio tree will only have just begun to grow its branches.