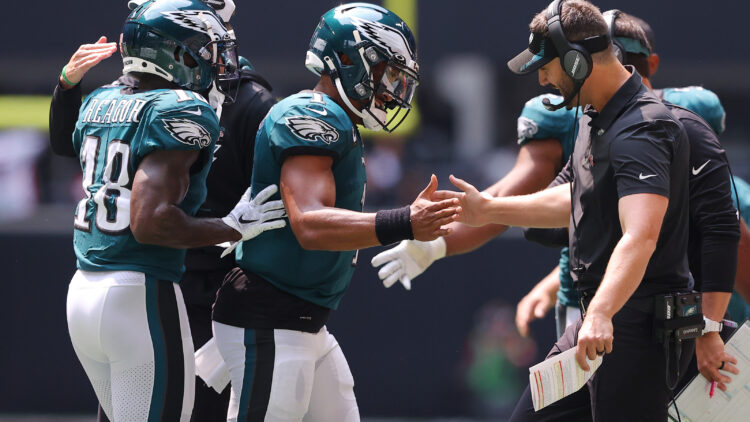 ATLANTA, GEORGIA - SEPTEMBER 12: Jalen Hurts #1 and head coach Nick Sirianni of the Philadelphia Eagles celebrate a touchdown during the second quarter against the Atlanta Falcons at Mercedes-Benz Stadium on September 12, 2021 in Atlanta, Georgia. (Photo by Kevin C. Cox/Getty Images)

The Eagles‘ first game with Nick Sirianni’s new offense was a resounding success. They stayed balanced, got their playmakers the ball, and put up 32 points on the Falcons.

Get Smith the ball

DeVonta Smith lead the Eagles receivers with eight targets and six receptions for 71 yards and a score. It was clear that Sirianni wanted Smith to touch the ball and impact the game. That’s exactly what he did. The threat of Smith helped open up space for Dallas Goedert to go to work and pulled attention away from the rest of the Eagles offense.

If there was any question about Sirianni’s preparedness as a head coach, he answered that on Sunday — at least the clock management portion. The Eagles were aggressive when they should have been, took chances and shots, and made the most of their opportunities.

Nick Sirianni and the Eagles were able to maintain balance and keep the Falcons defense off-balance. They ran the ball 34 times for 168 yards and one touchdown while passing 35 times for 264 yards and three touchdowns. Throw in the use of Jalen Hurts’ legs on scrambles and keepers and the defense has to defend every blade of grass and can’t key on run or pass.

Add in seven different players touching the ball in the pass game and we have an Eagle offense that looks — dare I say it — complete. The big three of Reagor, Smith, and Goedert all had at least five targets and a touchdown. Miles Sanders looked back to form and Kenneth Gainwell had some nice spot duty with 4.1 yards per carry.

The quarterback and coordinator relationship is an important one. Don’t let anyone tell you otherwise. We saw the damage a broken relationship can have last year. If those two men are clicking and believe in one-another, the rest of the team will follow.