NFL Team Stat Leaders: Who’s Here to Stay and Who’s On the Rise

The first two weeks of every NFL season see some units start fast, and others struggle to meet expectations. With such a small sample size, team stats can be deceiving. Who is enjoying 15 minutes of fame, and who will actually be at the top in January? Though we’ve only seen two-seventeenths of every team’s final product, surprises have come from both sides of the ball. I examine NFL team stat leaders through two weeks of play, their chances of maintaining their success, and the teams that stand to replace them.

The Las Vegas Raiders‘ passing offense came out swinging to start the season. After beating the Ravens in an exciting Monday Night Football game in week one, Derek Carr & co. hung 26 points on the Steelers to start 2-0. They lead the league in yardage and are ranked seventh in scoring offense. Quarterback Derek Carr is playing some of his best football, leading the league with 817 yards through the air (130 yards more than second place Kyler Murray). He holds the fourth highest QB passing grade according to PFF, and has led his offense to fifth in per-drive scoring rate.

Importantly, however, this unit lacks balance. Las Vegas has had serious difficulty running the ball. They rank 30th in rushing yards. The primary blame for this falls on the offensive line, who ranks dead last in run blocking according to PFF. Thus, the Raiders rely more on Carr’s ability to produce explosive plays, rather than overall efficiency, to get in the end zone. Las Vegas is closer to average when considering measures of expected points added per play (12th) and success rate (18th). 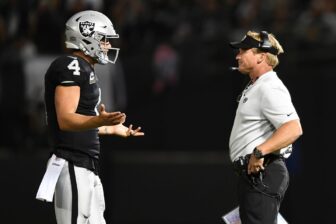 Also Read:
Is Derek Carr a Game Manager or Does he Have Untapped Potential?

Still, expectations have soared for the Raiders. Their playoff chances jumped from a range of 17% – 49% in the preseason to 50% – 60% after week two, according to FiveThirtyEight. The defense has surpassed expectations, but Carr’s success in connecting with his receivers has certainly helped push this team into the playoff conversation. Led by Carr and helped by a much improved defensive unit, this offense will remain towards the top of the leaderboards for awhile. However, their lack of a run game and lack of efficiency compared to the likes of the Browns, Chiefs, and Cowboys, doesn’t instill faith that they’ll hold onto the top spot forever.

Tom Brady and the Bucs don’t look anything less than a powerhouse, but they haven’t necessarily looked that way on paper. Despite leading the league in points (79) through two games, Tampa Bay is mid-range in several statistics. They are 13th in total yards, 31st in rushing yards, and 19th in EPA per play against two defenses that were below average in 2020. This is pretty easily explained by their sloppiness. The Bucs lead the league with a whopping 22 penalties, as well as five turnovers. They’ve struggled on third down, ranking 19th in third-down conversion rate and have also been taking sacks in the red zone.

The numbers don’t always paint an accurate picture of future performance, however. That seems to be the case here for the Bucs. Tom Brady is feeling at home in this offense packed with weapons. He is playing like it, too. He has the highest PFF grade among passers. Plus, who better than Brady to stress the importance of more disciplined play? Minimizing penalties and emphasizing ball security will improve the efficiency of this already productive Buccaneers’ offense. Rest assured, they’ll be at the top of every stat before their trip to LA in February.

The Carolina Panthers are another team that have surprised with a 3-0 start. Though the offense with Sam Darnold has been solid, the young and talented defense has contributed to their fast start in a big way. They lead the league with ten sacks and 190 yards allowed per game. According to ESPN Stats & Information, they are also the top-ranked defense in EPA per play (-0.25), defensive success rate (67.3%), third-down conversions allowed (25%), and yards per play allowed (3.69). They are number one in defensive value over average according to Football Outsiders. 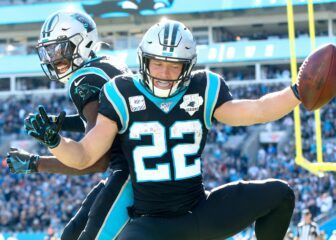 The easy argument against Carolina’s continued defensive success is the unimpressive teams they faced in the first two weeks. Though their first win came against a bad Jets team, in week two they dominated a Saints team that handed Aaron Rodgers one of his worst games ever. Against the Saints, the Panthers had four sacks and eleven QB hurries, pressuring Winston on 64% of his drop backs. That’s the third highest rate for any defense since tracking of the metric began in 2009. New Orleans’ six first-downs were their fewest under Sean Payton. Thus, though the talent on the other side may not have been the most competitive, Carolina was utterly dominant. The schedule is harder going forward, but the Panthers have momentum to build on. Their stats will be tempered a bit, but the Panthers have the pieces to continue to be impressive.

Expectations were high for the Cleveland Browns‘ defense with Jadeveon Clowney and Myles Garrett leading their pass rush. However, the unit has struggled to come together. Cleveland is 30th in EPA per play allowed, and have allowed a conversion on 63% of third-downs. They rank 14th in yards allowed, 23rd in pass yards allowed, and ninth in rush yards allowed. Despite their talent on the line, they have achieved only three sacks (20th in the NFL).

This slow start could be explained by the Browns’ overhaul on defense in the offseason. Not only are they implementing eight new starters, but they are also using a new scheme with defensive coordinator Joe Woods. Given new restrictions on padded practices this training camp, the group’s conditioning and chemistry simply needs more time. They hold the fifth best pass rush win rate in the league and with talent like Clowney and Garrett, it’s only a matter of time before they get home. With the mobility of Patrick Mahomes and Tyrod Taylor behind them, as well as the elite Chiefs’ receivers, this defense will fall into place. With their talent, the Browns will climb defensive leaderboards.