How Joe Lombardi has the Chargers offense attacking the entire field

The Los Angeles Chargers are attacking on both side of the ball. While the defense is making strides with Brandon Staley at the helm and Derwin James finally healthy, the offense has a new look with Joe Lombardi dialing up plays. They’re using motion to give coverage indicators and help the run game, tempo to keep defenses vanilla and off balance, and a ton of tight formations to help the run game and to attack the edges of the field.

In fact, they have one of the shortest distances between the two widest receivers in the NFL. What tight formations do is add gaps in the run game and create space outside for quick throws and leverage. Usually, tight formations mean crossers like the Mesh concept. That prevents defenses from wanting to play man-coverage against them because of the ability for the offense to rub them as they chase receivers across the field.

The Chargers do use those crossers, but they predominantly use their tight formations to exploit the outside. They have killed teams with their Stick/Flat spacing concept out of a balanced tight formation.

The Stick/Flat concept creates natural rubs, lets Herbert get rid of the ball quickly, and exploits defenses aligned in zone. All Herbert needs to do is locate the flat defender. If they widen to the flat, he throws the stick right behind them. If they get caught up on the stick, there’s now space outside to throw the flat.

They’ll run the same concept out of multiple different formations, but the core of it is still the same. Locate the flat defender and work off of them to exploit the outside.

In the Saints system, they would call the alignment to the bottom of the formation “Snug Left”, with the H-back off the ball while tight to the formation and the receiver three yards from the offensive tackle outside. That formation is one of their favorites to run the Stick/Flat combo from. What it does is give the Chargers leverage in two separate directions. What the Stick route is trying to do is get in the path of the flat defender. Since this formation also adds run gaps to defend, that brings defenders inside. As a result, the outside stick route has leverage on the flat defender. That can then spring the H-back outside for easy yards.

The concept is simple for the Chargers. They have also added wrinkles to it with formations and by using rail routes to exploit defenders coming down hard to defend the flat. In Week 4 against the Raiders, Joe Lombardi and the Chargers offense are running the Stick/Flat to the single receiver side. However, now the running back is running a rail route instead of the getting to the flats.

Since the Stick/Flat is such a simple read, that’s where some of the Chargers’ use of tempo comes in. The tight formations force defenses to have to communicate and transfer while making sure they’re in good position so they don’t get out-leveraged. Against teams that like to do lots of rotations and disguise coverages like the Chiefs, tempo is incredibly effective.

Here on the goal line, the Chargers use tempo and the Chiefs are caught out of position. They’ve left Mike Williams uncovered while trying to line up to defend the three receivers to the bottom of the screen. The Chargers are running their Stick/Flat concept. Nobody gets over to the stick in time and it’s an easy touchdown for LA.

They beat the Chiefs for two separate touchdowns using the exact same method and play both times. Now, the Chargers are in a Double Snug look while running with tempo and the Chiefs are again out of position on the goal line. Defenders are scrambling and chasing the flats, which leaves the stick wide open for a touchdown.

Tempo has absolutely killed teams and the use of tight formations makes it even more difficult. When they’re under center with a condensed formation, the Chargers will also work play action and their run game. Again, LA has hurried to the line. Dallas is all sorts of messed up in how they’re trying to align. Linebackers are scrambling everywhere and then the Chargers run a play-action off of split zone and hit Mike Williams, who is wide open in the flats for a yard after catch opportunity.

The Chargers do a great job of getting to the ball with some of their base concepts, throwing in a motion while the defense is still adjusting, and forcing coverage busts simply by getting to the ball fast. It’s enough to make any defensive coordinator get into more vanilla coverages for fear of having guys out of position and blowing assignments. You have guys looking at each other, not in their stances, and out of position, which creates easy opportunities for the offense.

The other aspect of using tight formations is its utility in the run game. Extra players tight to the formation means extra gaps for the defense to control. Since teams play off-coverage to prevent getting rubbed from the tight formations, that gives the Chargers space to operate. Joe Lombardi does use pure drop-back passes in his offense, but he also uses similar structures as Shanahan and McVay with motion, outside zone, and play-action. 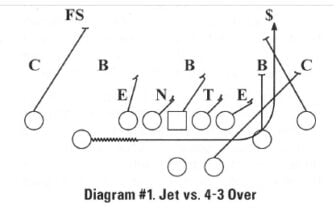 The tight formations allow that motion to hit quicker, stresses the defense horizontally since there’s more space, and opens up running lanes the since defenses have to respect the threat of attacking the outside space.

When your run game, drop-back game, quick game, and everything in between is run out of these condensed formations, it makes it really difficult to defend. Now throw in the threat of play-action passing and Herbert’s ability to push the ball downfield, and you’re in a really tough spot. One of the Chargers’ and Lombardi’s favorite play-action concepts is Yankee. 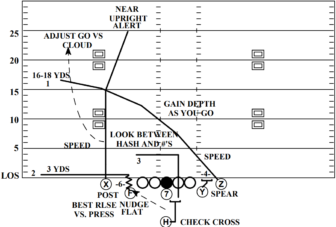 Yankee is a two-man route concept that uses play-action as a replacement for a third route. Yankee is almost always run out of tight formations or heavy personnel so that the defense is forced to put defenders in the box and give a one-safety look. All Yankee is, is a deep dig paired with a post from the opposite side. The play-action pulls linebackers up to clear space for the dig, and if the safety crashes down to protect against that dig, the post is open behind them. It’s the perfect compliment to the tight formations, Sail concepts, and run game that the Chargers base out of.

The Chargers are humming right now and sit atop the AFC West. They might not be blowing the doors off teams statistically, but they’re efficient, multiple, and getting Herbert into spots where he can make easy decisions and use every inch of the field. What Joe Lombardi has done with the offense has made the Chargers balanced and very difficult to plan for. He keeps his receivers clean, gives them space to operate, and ties in multiple concepts from his time in New Orleans and what he learned from his time being the OC in Detroit. With Herbert playing at an elite level and fitting throws into inhuman windows, the Chargers might be competing for more than just the division crown.