Patriots QB Mac Jones is getting better every week 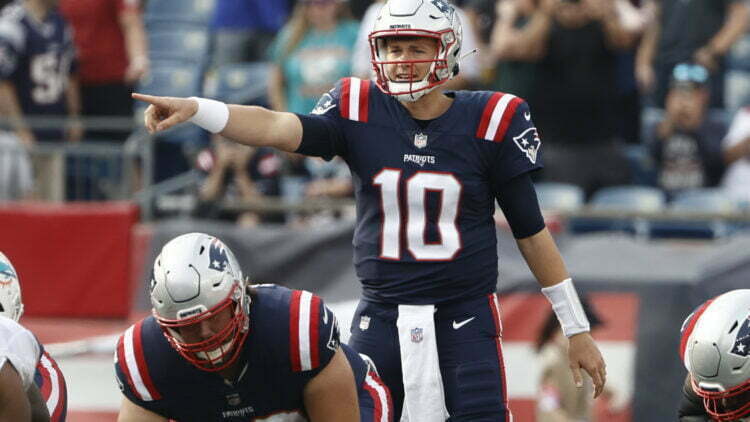 Don’t look now, but Mac Jones and the Patriots are quietly sitting at 4-4 and are just one game back from the division-leading Bills. They have some quality performances against playoff teams like the Cowboys, Bucs, and Chargers and have put themselves in a position to make some noise down the stretch.  A lot of their success on offense is due to the growth of Mac Jones. While he’s not setting the world on fire, he’s continually growing from week-to-week and within games. There are mechanical issues that are popping up which are causing some of his inaccuracy, but from a decision-making standpoint, he very rarely makes the same mistake twice.

Early on in the season, he played a little safe. That’s to be expected for a rookie quarterback. He is great at the quick game. He has also started to be more comfortable with down-field concepts as the season has gone on. But, even early on he showed some nice flashes.

That quick game is very similar to the RPO throws at Alabama which allows Mac to locate a single defender and read off of their movement and leverage. It creates easy completions and Mac can use his accuracy underneath.

Where he’s developed, is in his ability to anticipate throws. He has become more comfortable in the system and understands where guys are going to be. Mac Jones and the Patriots still lean towards being conservative and checking the ball down, but he’s able to keep the offense on schedule and sustain drives.

To the top of the screen, New England is running a corner from their #2 and a dig from their #1. Those are paired with a drag from the other side of the field. As soon as Mac identifies that it’s man coverage and that the linebacker is staying underneath, he should know he’s throwing the dig route over the top. It’s 3rd and long and that throw will at least give them an opportunity to convert or kick a field goal. That dig has inside leverage, the underneath routes occupy the linebackers, and there’s a clear window to drive the dig in and pick up 10-15 yards. However, with pressure, Mac brings his eyes down and dumps the ball off for two yards.

Those issues with anticipation continued into Week 3 against the Saints. Against a very similar look and with a similar play concept called Drive, Mac Jones again gets man coverage from the defense. As soon as he gets out of his play-action fake, he needs to locate the underneath defenders. They’ve all attached to the drag which opens up space for the dig. That dig has again won leverage to the inside. Instead of staying calm in the pocket and delivering the ball over the middle of the field, Mac steps up and into a sack.

Fast forward to the Chargers in Week 8, and Mac Jones is now throwing that same dig route against man coverage with anticipation and confidence. The Patriots are running Y-Cross with Hunter Henry coming across the field. As the linebacker attaches to that route, Mac knows he has the dig behind it isolated with nobody to interfere. Just as the receiver is planting to break into the dig, Mac is starting his throwing motion and drives the ball in before the safety.

The anticipation is starting to come and that should continue to grow with time and reps through the year. However, Mac is also growing within games and with adjustments on the sideline. Back in Week 3 against the Saints, the Patriots have a fade/out to the top of the screen and a combination of Dragon and Lion to the bottom with two slants and a quick out.

Against two safeties, you read Lion which is the two-slant concept to the bottom of the screen. In this case, the linebacker flies down on the flats and the inside slant is open behind them. However, Mac reads the fade/out at the top of the screen. He is doing that based on the leverage of the linebacker to that side. It’s not necessarily a bad read, but it’s not the best read. He holds the ball and waits for his receiver to break before throwing and it ends up incomplete.

Later in the very same game, New England comes back to the same concept and look two separate times. The defense reacts in exactly the same way. This time, Mac is looking to the slants and flat combination at the top of the screen. As soon as the linebacker flows, he throws behind him to the inside slant. In another rep, there is no inside linebacker and Mac is able to diagnose and throw in rhythm for an explosive gain.

Where Mac has continued to struggle a bit is the type of ball velocity he’s using on his throws. The Texans are showing two high safeties pre-snap. Mac Jones looks to the safety at the top of the screen and sees them buzz down. As a result, that opens up the middle of the field with the opposing safety is hanging to the bottom to provide deep ½ support. Jones identifies all of this, knows the seam down the middle will be open, but throws a floater instead of driving the ball before the safety can get over.

If he drives this ball as the receiver clears the linebacker and before the safety, it’s an explosive gain. Instead, he hangs the ball up and allows the safety to make a play on it. Some of that is due to just learning the speed of the NFL and some of it raises questions on arm strength and his ability to drive the ball on deeper throws.

Furthering some of the issues when pushing the ball downfield and driving the ball, is a mechanical issue with keeping his shoulders and hips even with each other. That’s an issue I noted in his scouting report from his time at Alabama, and it has continued to crop up in New England. When he misses, that is usually the culprit.

There can be shoulder tilt and lean when you throw, but the hips and shoulders shouldn’t become disjointed and non-parallel. When that happens, it causes quarterbacks to pull down on the ball and slice which can lead to horizontal inaccuracy and, depending on the degree of the tilt, can cause vertical inaccuracy as well. On this throw vs. the Saints, there’s a lot of mechanical issues going on. As he comes out of the play fake and identifies his receiver, he rises as he begins his throwing motion. Mechanically, you want to stay level as much as possible to create rotational force on the ball.

His next issue is his toe that is stuck behind his receiver. That reduces his ability to fully rotate his hips and stops his throwing motion short. To compensate for rising and for being unable to fully rotate, his shoulders now start to lean and force him to pull down and across on the ball. The ball should probably have been caught, but this is a throw that’s 10 yards directly in front of him and needs to be placed right on the numbers to offer a yards after catch opportunity. That’s not the kind of ball he’s delivering regardless of whether the receiver catches this and prevents the interception or not.

When he’s trying to drive throws with more velocity, his mechanics tend to waver and he can have more inaccuracy. It’s not incurable, he’s just inconsistent right now. He’s made some amazing throws and shown his ability to drive the ball. What separates good quarterbacks from great ones is to make every throw every time.

Mac Jones has made some great throws under pressure and shown some great ball placement. Now he just needs to do it consistently. He’s anticipating more, finding what the defense gives him, and beginning to be a more decisive and confident thrower. When he’s in rhythm and knows where to look, he’s generally making all the right decisions. It’s just cleaning up his comfortability in the offense and continuing to grow. If that all comes together, the Patriots will be back in the playoffs sooner rather than later.