The spread offense stresses every blade of grass on the field and makes the defense cover the entirety of space available. By sending receivers or tight ends outside and away from the linemen, the defense also has to remove players and put them outside to cover them. That leaves less people inside to stop the run and can isolate defenders in the passing game.

Origins of the Spread

Spread originated with Rusty Russell, who used the spread attack in 1927 to give his smaller players an advantage over their larger opponents. However, most spread teams around that time still operated under center and relied heavily on the run game.

In 1956, the shotgun spread was created. The offense then began to take prominence to trickle into college football.

In 1970, Jack Neumeier created what most people think of as the “modern” version of spread with one running back and four receivers split out wide. From there, offshoots of the spread offense started to pop up. There was the adaptation of the Run and Shoot as well as the Air Raid and multiple other tweaks and adjustments like changing line splits and running up-tempo.

Spread offenses typically have similar looks whether they’re in shotgun or under center. There are a lot of four-receiver sets that force the defense to send players out to cover while also trying to have enough players to defend the run. This is where the RPO and read option came to prominence. Defenders are put into a bind with how much space they have to cover between the run and the pass. Offenses then adapted to take advantage of whatever choice those defenders made. 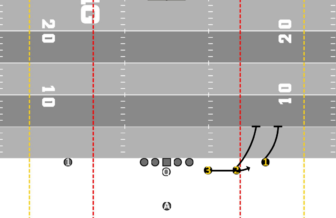 Here, the Cardinals exploit the amount of space the defense has to cover by using a spread formation and running routes underneath and deep outside.

While there are less gaps in the run game now, the picture becomes much clearer for the offensive linemen and there are less defenders that can contribute to stopping the run overall. That gives the opportunity for offenses to work double teams and get onto second level defenders.

The spread offense attacks all areas of the field with both the run and the pass. It isn’t new by any means, but the adaptations and adjustments continue to come. The spread offense has become a staple through all levels of football.