Halfway through the NFL season, we know who is feeling the pressure and who is sitting comfortably. Here we break down the hot seats of a few people who might not be able to keep their jobs much longer.

I was maybe the sole believer in the Giants this year and they have made me look very dumb. Gettleman and Judge seemed to be tied together and while they’ve been consistently drafting in the top half of the first round the past few years, they haven’t shown any signs of getting better. Instead, they are stuck with an underperforming quarterback, an injury-prone star running back, and a million talented receivers who are using these games to get their cardio in. Changes have to be made in New York and it’s likely to be the main two football decision-makers.

After looking like a future star in his first season, Nagy and his offensive play calling have been colder than a Chicago winter the past few years. How Justin Fields plays down the stretch will determine Nagy’s job security. Outside of the San Francisco game, Fields has looked like a stereotypical rookie. Should the Bears only get to 6 or 7 wins this season, ownership may be prepared to clean house and start building young talent around Fields by moving on from some of the pricey veterans. 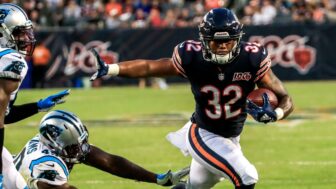 Also Read:
David Montgomery Can Change the Identity of the Bears Offense

Kyle Shanahan has made it quite clear that Garoppolo will be the starting quarterback as long as the team has a chance to make the playoffs, but can we totally believe him? Sure, Garoppolo knows the offense and has moments where he looks the part of a starting quarterback, but overall he is way too inconsistent. Opposing defenses know what to expect with him behind center. One or two more poor games and you have to expect Trey Lance to step into the starting role.

Deshaun Watson to the Dolphins has been swirling for the last nine months and still, nothing has happened. Watson is an obvious upgrade to Tua, but Tua is not the reason for the Dolphins’ struggles. Two of his top three receivers have been hurt, they have no running backs that strike fear in defenses, and their offensive line is a mess. Does Watson automatically make this team a contender with the current roster they have? I’m not convinced. Build up the roster and try again with Tua at the helm in 2022.

I love Vic Fangio the defensive coordinator. I’m not sold on Vic Fangio the head coach. The Broncos have been stuck in neutral the last three seasons. They have had inconsistent quarterback play which hasn’t helped them develop their young and talented skill players. They have shown moments of brilliance, but did trade away their franchise defender in Von Miller. The only way Fangio returns next season is if the Broncos somehow make the playoffs and that might not even be enough.

Also Read:
Why the Vic Fangio scheme is sweeping the NFL

Everyone knows the rocky year it’s been for Meyer in Jacksonville. Does anyone actually expect him to return next year? He looks completely uninterested on the sideline and a young team is showing no signs of improving. The Khan family, the Jacksonville owners, have shown to be very patient with head coaches in the past which is good for Meyer. Also, they just pulled off a huge win against the Bills. However, I think Meyer just retires and goes back to a much easier gig working as a TV analyst.

After the first few games, it looked like Darnold was finally starting to come into his own. The last month, however, he has looked like the Jets version of Darnold. Joe Brady is an elite play caller so there’s really no excuse for the fourth-year quarterback to continue to make avoidable mistakes. Christian McCaffrey is coming back, which will surely help. If he continues to struggle and can’t get the job done, expect the aggressive Panther front office to make a move for a veteran quarterback. Things are trending in the wrong direction quickly.