The Kansas City Chiefs may have found their groove

The NFL world has been in a frenzy because they have never seen the Kansas City Chiefs perform so badly in the Patrick Mahomes era. Even though they had a tough schedule to begin the season, they started off 3-4. Entering Week 10, the Chiefs were last in their division. No one saw this coming to begin the season. Now, after a 3 game winning streak and the whooping they gave the Las Vegas Raiders, it seems like the Chiefs are back. The defense is playing better and if Sunday Night’s game was any indication, the offense is finding their groove again. The Chiefs are still one of the top contenders in the AFC and it was wrong of us to write them off so quickly.

Since the start of the season, the Kansas City Chiefs never really looked right. Their defense was historically bad, but what was most surprising was that their offense wasn’t as explosive. Their offense is often compared to the Golden State Warriors. Like the Warriors the Chiefs were that team that could be down 10 points one minute then score 21 straight points in the blink of an eye. That wasn’t happening this season. More and more teams started playing two-deep zone to take away the deep shots. They also trusted their front four to get pressure on Mahomes instead of aggressively blitzing him. As a result, Mahomes was forced to do a lot of check-downs and for a while, it seemed the offense would get impatient. Mahomes has already thrown ten interceptions this season compared to six the previous year. Some of them were unforced and he has been careless with the football. With the defense performing poorly, it seemed like he was pressing to put points on the board.

Sunday Night was different. It was clear that the offense found their groove. Mahomes was far more comfortable in this game taking the check-downs and short routes. As a result, the Raider’s defense got impatient and became more aggressive later on in the game. That led to Tyreek Hill and Byron Pringle getting free multiple times down the field. The takeaway is that Mahomes is learning that the short throws will eventually open up the entire field. They also got Hill free on a few crossing routes instead of sending him deep. The Chiefs scored 41 points last night, but left at least 14 points off the board. If this trend continues, the Kansas City Chiefs will be a very dangerous team down the road.

The Chiefs defense is at their best when they are able to disguise their schemes. Under Steve Spagnuolo, the Chiefs give Tyrann Mathieu freedom to roam all over the field. This confuses a lot of quarterbacks which gives the Chiefs more time to bring pressure. Spagnuolo loves to blitz. So, with Mathieu’s versatility and their pass rush, the Chiefs have historically created turnovers and gotten off the field on 3rd down. 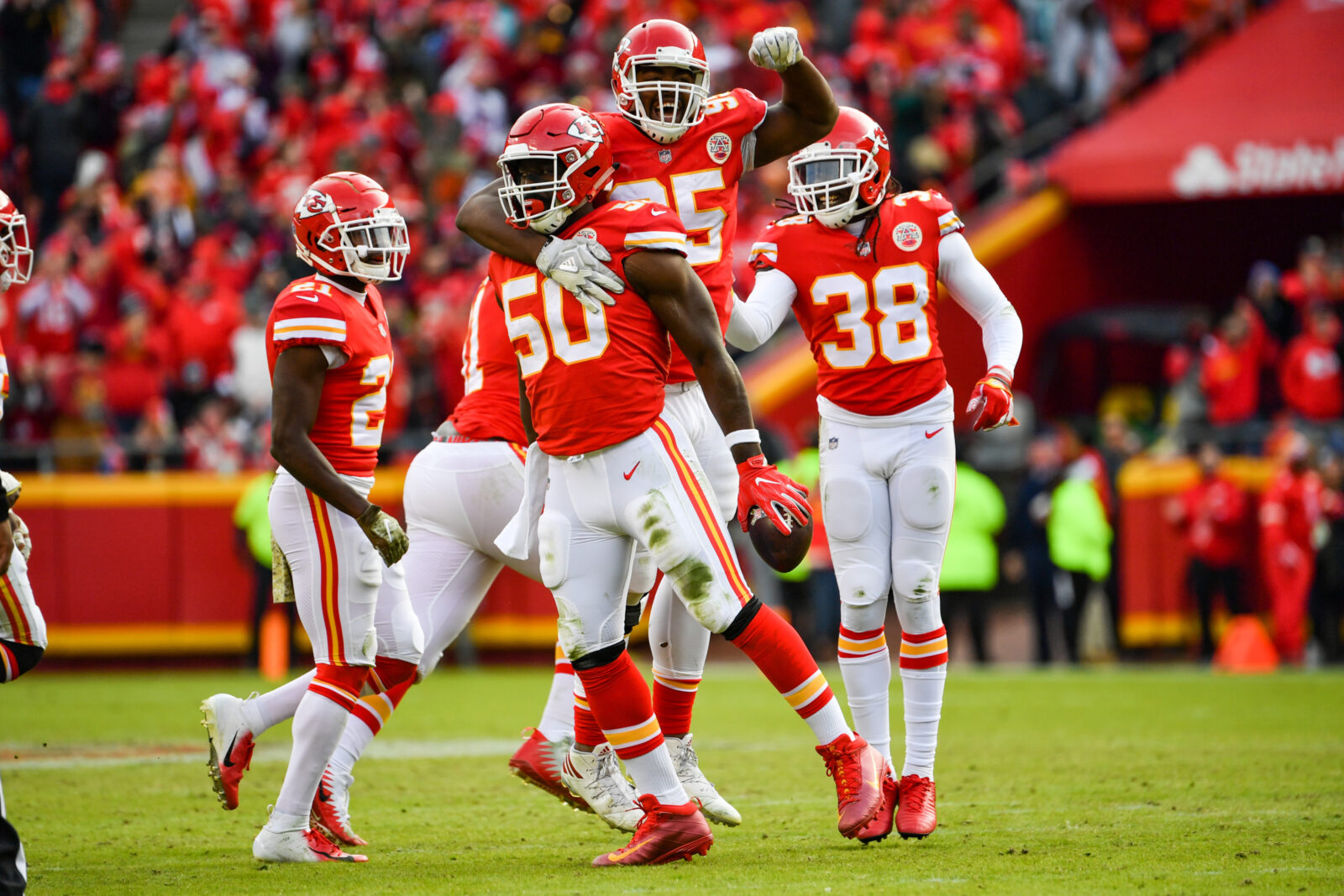 Also Read:
Why the Kansas City Chiefs defense is a problem for quarterbacks

To begin the season, the Kansas City Chiefs had the worst defense in the league. At one point they were allowing the highest 3rd down percentage in the league. Due to their complex system, you saw alot of coverage breakdowns in the back end allowing big plays down the field. Too many times the safeties and corners were looking around at each other confused. The communication was not there early in the season.

They were ranked 27th in the league against the pass and they were the 4th most penalized team. Unlike their previous championships seasons, even though they didn’t field the best defense, they could always sack the quarterback and create a lot of turnovers. That wasn’t happening early. Due to their inability to get off the field in critical situations, this forced the Chiefs offense to start pressing. They were uncharacteristically careless with the football which put the defense in a bad spot. Over the last three weeks, the Chiefs defense has played outstanding football. Since thier loss to the Tennessee Titans, the Chiefs have allowed 15.6 points per game. Last night was especially impressive because they shut down the 2nd best passing offense in the league. If the Chiefs defense continues to play at a high level, then they are right back to being championship caliber.

The Kansas City Chiefs have been one of the most dangerous teams in the NFL in the last few years. However, due to their difficult schedule and other circumstances, they went through a rough patch early on. The offense is now starting to figure out how to attack defenses and the defense is coming together and performing well. Communication on both sides is much smoother. If they continue to play complimentary football, they will be the favorites coming out of the AFC.