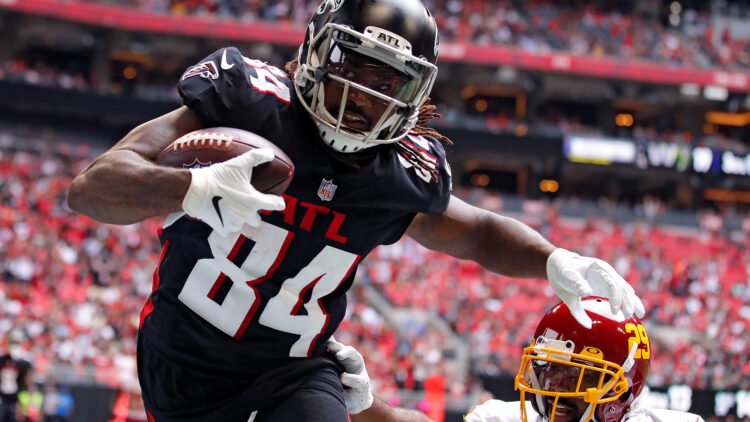 Cordarrelle Patterson is 30 years old and setting career highs. He has amassed over 1,000 total yards and he is leading the Falcons in rush yards, rush attempts, and is trailing only Kyle Pitts in receiving yards. Patterson has bounced around the league and he was always labelled as being a guy with “potential”. That’s not a title you want to carry with you through most of your NFL career. All potential means is that you’re capable of doing something, but not currently doing it.

He spent four years with the Vikings where he was predominantly used as a receiver and return man. He then bounced around from the Raiders to the Patriots to the Bears and has now landed with the Falcons. Josh McDaniels and the Patriots are the ones that started to unlock some of Patterson’s potential on offense by using him as a running back. After some injuries to their running back group, New England started to deploy Patterson as a running back later in the year. With a knack for the big play, the Patriots wanted to find ways to get him the ball. Putting him in the backfield was the easiest way to do that. Previously used as more of a gadget player, the Patriots gave him 42 carries at running back while adding in 28 receptions.

While with the Bears for the two following years, Nagy trimmed down on the running back reps – especially in year one where he only had 28 touches on the year. That’s certainly changed in Atlanta with Patterson already doubling his season high in touches with 168 on the year.

Despite cutting his teeth as a receiver, Patterson runs hard and with power. He’s still not a natural running back and has some vision issues, but he’s explosive and has given the Falcons a spark. He lines up as an H-back, in the backfield, split outside, and in the slot. However, the bulk of his reps in Atlanta are coming at the running back position. 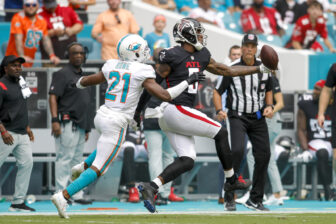 Work as a running back

While there’s a lot of positives and utility for a guy that can bounce around at different positions, he’s definitely not the best pure running back on the team. He’s not great at setting up blocks and the Falcons love to run outside zone which is heavily vision-dependent. Atlanta is also second to last in the league in rush DVOA. The offensive line is just not very good and they get beat pretty frequently. Combine that with a runner that doesn’t have natural vision in the box, and you get some issues. Patterson is going to pop one or two chunk runs a game, but he’s also going to get you a lot of one- and two-yard gains as well.

Because of Patterson’s return ability and history at receiver, you’d think screens and getting him on the perimeter would be a good way to utilize him, but Patterson flat out cannot read screen game to save his life. He routinely runs into unblocked defenders and doesn’t understand the track he’s supposed to take. Whether that’s on him or coaching can be argued, but it’s very frustrating to watch.

The Falcons are running a screen to Patterson who’s aligned as the #2. They even catch Tampa in a blitz on top of that. By nature, screens outside take a little time to develop and you need to work off of the blocks of the offensive linemen. Those linemen have to pass set and then get outside to those blocks. As Patterson gets the ball, you can see the Falcons have numbers with linemen releasing. Where they don’t have numbers is down the sideline where both the corner and the safety have an angle on him. Where this play is designed to go, is between the hash and the numbers. Patterson should run right off of the offensive linemen’s blocks. Those linemen are going to wash defenders outside. Instead of cutting inside and getting vertical, Patterson immediately takes off to the outside. At that point you might as well not release linemen because they’re never going to get out there to help you. The line has no angle to block anyone and he runs right into a tackle.

Deadly on the perimeter

Patterson hasve success on more clearly defined running lanes like designed cutbacks and pin and pull schemes. Using pin and pull schemes get him out onto the edge with a clearer view of the field. That’s the easiest way to most closely mimic what he sees on kick returns and when split out. It lets him use his speed to get the edge and outflank the defense. It also has the added benefit of hiding some of the interior blocking from the Falcons offensive line.

Then, once Patterson gets on the edge and past the first wave, he’s a problem to bring down. He runs hard, hits creases, and can beat guys in the open field without losing much speed.

Splitting out at receiver

It’s a huge luxury to be able to split Patterson out and force the defense to determine how they’re going to match personnel. Before the huddle is broken, the defense needs to decide how they’ll matchup with Patterson outside, in the slot, or out of the backfield. Do they want to match with an extra corner because of the pass threat? Or a linebacker to stop the run. That gives opportunities for the Atlanta offense to create mismatches.

Atlanta doesn’t get to it a ton, but I do love sending him on rail routes down the sideline and giving him option routes out of the backfield. It immediately gives him space to build up speed, can isolate him on linebackers, and gives the offense an advantage.

Then, you can split him outside as a receiver and let him just go be a receiver. As a #3 type of guy outside, you can do much worse. He’s capable of running a relatively diverse route tree and attacks the ball in the air.

Cordarrelle Patterson is setting career highs and can still be more effective. He’s never going to be a great pure running back – he’s 30 years old. But, he can still be that offensive weapon that splits time outside and at running back. In a matchup-driven league, Patterson can be a true X-Factor. He might not have a ton of years left, but, after nine years in the league, maybe someone is actually starting to understand how he can be maximized. He’s fun to watch and he gives a spark whenever he touches the ball.