NFL coaching carousel: Which head coaches are on the way out?

With Jon Gruden and Urban Meyer already canned during the season, the coaching carousel is in full swing. The real question that we will soon figure out is who else will join those two in the unemployment line? Here’s a breakdown of those which head coaches are on the hot seat and whether or not they will return for the 2022 season.

We’ll start with the easiest decision of the bunch. Matt Nagy and his family might as well start booking some moving trucks and a good real estate agent because there is no way he stays in Chicago. Despite making the playoffs in two of his four seasons, the Bears are getting worse every year and have one of the worst offenses in the league. General Manager Ryan Pace hasn’t helped him much in terms of building a strong roster, but many of Nagy’s choices have been head-scratchers. The Chicago job is appealing in the that you have a young quarterback in Justin Fields. However, they have no first-round pick this year and many holes on the roster could mean a full rebuild is on the horizon.

The Texans are horrible, but Culley has done an admirable job this season. He got dealt a poor hand with the Watson situation and having a team that didn’t have their first two draft picks to go along with no cap space. Is he the long-term answer? Absolutely not. But he’s bought himself at least one more, if not two more seasons as head coach.

Matt Rhule has had quite a fall from grace. Just two years ago he seemed to be one of the best head coaching hires and would be given plenty of time to build a winning culture. However, the front office has been very aggressive with trades and has a roster that could compete for a playoff spot. Instead, the Panthers have lost five straight and lack an identity as a team. The moves the organization has made and will likely continue to make don’t coincide with what Rhule has been preaching: patience. Owner David Tepper wants to win and win now. If they think they can make a move to acquire one of the elite quarterbacks on the market, Rhule will be let go. I’m not saying I agree with it, but I think it happens. 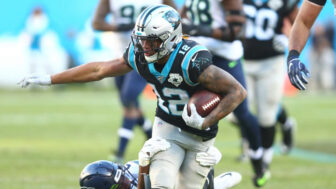 Also Read:
DJ Moore is on his way to being a superstar for the Panthers

This one is already settled with the report that both Judge and Daniel Jones will return next season. Despite the NFL being known for its inability to tell the truth, I believe the Giants. It’s likely that general manager Dave Gettleman will be the one fired and the Giants will try to pair a new general manager with Judge. We’ve seen teams do this in the past and rarely does it mean longevity for the head coach. The real question is will Judge be let go this upcoming offseason or the next? Either way, it doesn’t look great.

This is the toughest one to figure out. On one hand, Zimmer is a heck of a coach and has had a good career in Minnesota. On the other hand, he’s won just two playoff games in seven years and the team seems to have stalled out due to their lack of cap room. It might be time for a change of scenery and to move on from a head coach that will be sixty-six at the start of next season. As this roster ages (outside of Justin Jefferson) while staying with very expensive quarterback, the Vikings could go for an offensive-minded hire to spice things up.

For the first time in his career as the Seahawks head coach, the team will not be over .500 nor make the playoffs. There are rumors that Wilson is unhappy in Seattle and could want out. Even if he does stay, Carroll has failed the franchise with a number of questionable coordinator hirings. This offense should not be as bad as it has been and ultimately it falls on play-calling. Rather than be let go, we should expect Carroll to ride off into the sunset and call it a career. I don’t know if many seventy-year-olds want to be part of what looks to be a full rebuild.

I think Vic Fangio got dealt a bad hand in Denver. They never really had a strong roster in his three years and the quarterback play has been abysmal. That being said, the Broncos have been such a boring team to watch the last few years, and now that it looks like they’re out of the playoffs, it’s time to move on. New general manager George Paton will get to pick his own head coach and Denver figures to be one of the likely destinations for a disgruntled veteran quarterback (Rodgers, Watson, and Wilson) and could immediately become a contender in the AFC.

Also Read:
Why the Vic Fangio scheme is sweeping the NFL
Processing…
Success! You're on the list.
Whoops! There was an error and we couldn't process your subscription. Please reload the page and try again.
Share:
Thanks for subscribing! You should receive a confirmation email shortly asking you to verify your subscription.