The Eagles had a heck of a weekend. They beat up on the Giants 34-10, they saw New Orleans and San Francisco lose, Jalen Hurts got elected to the Pro Bowl, and their run game is as lethal as ever. Philadelphia now controls their fate in the playoff race. They currently sit at the 7th seed. They lose the head-to-head tiebreaker to the 49ers (8-7), but are a game ahead of everyone else in the race.

The Eagles might not be playing the most exciting brand of football, but they’re sitting at 10th in overall DVOA and have the 4th best rushing attack in the league. After a slow start, Miles Sanders now has almost 300 yards in the last three games. Jalen Hurts is also starting to look a little more polished. There are still some accuracy concerns with Hurts, but the Eagles have won five of their last six games and are looking like a legitimate playoff contender.

525 yards, four touchdowns, and an 80% completion percentage. Not too bad for a second-year player coming off of an ACL tear. That performance not only put the Bengals in the drivers seat of the AFC North, but it launched Joe Burrow into the MVP conversation. Oddsmakers now have him at +3500 which puts him in the top eight. With two big matchups against the Chiefs and Browns coming up, he will have an opportunity to make an MVP case while simultaneously putting the Bengals back into the playoffs for the first time since 2015. 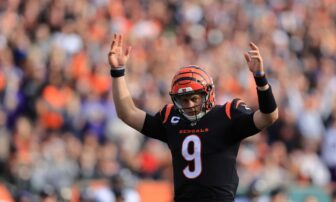 Also Read:
Joe Burrow is forcing himself into the MVP conversation

Baker’s return to the field after missing the Raiders game with COVID-19 didn’t go as planned. He threw four interceptions, struggled with accuracy, and the loss puts the Browns in a precarious situaiton. They still have a chance to make the playoffs, but they need some help. Mayfield is hurt and the Browns have dealt with a lot of injuries this year, but in a big moment, their franchise quarterback didn’t pull through. He’ll have another year to prove he’s worthy of a contract with Cleveland, but this season hasn’t helped him make a strong case.

The Los Angeles Chargers looked unstoppable early in the year. Justin Herbert was an MVP frontrunner, they were winning shootouts, and then it all started to slow down. Joe Lombardi was criticized for being too vanilla and unable to adapt in Detroit, and that may be the case again in Los Angeles. They have been struggling against inferior teams and losses to the Ravens, Broncos, and Texans could come back to bite them. What’s more, the defense can’t seem to stop anyone. LA will need Herbert at his best to make the final push into the playoffs.

Also Read:
How Joe Lombardi has the Chargers offense attacking the entire field
Processing…
Success! You're on the list.
Whoops! There was an error and we couldn't process your subscription. Please reload the page and try again.
Share:
Thanks for subscribing! You should receive a confirmation email shortly asking you to verify your subscription.