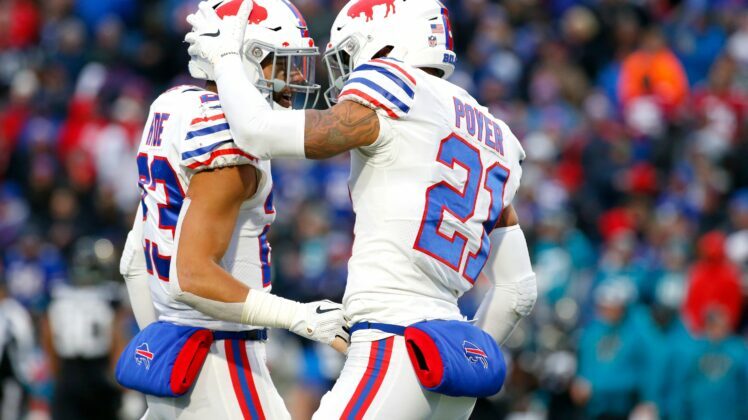 Safeties Micah Hyde and Jordan Poyer have taken the Bills defense to an elite level. They’ve combined for ten interceptions on the year and are a huge part of Buffalo’s 2nd ranked pass defense. Poyer and Hyde give Buffalo the ability to mix coverages. Both have the ability to play down in the box, have good ball skills, and can cover space in the secondary.

The Bills play a lot of man coverage, Cover 3 Buzz, and Cover 7, but they get to all those looks in different ways. They love to spin Hyde or Poyer down into man coverage, back into the deep quarter, or into a Robber role. Both of them are dynamic enough to do each of those things.

Cover 3 Buzz is a way to disguise Cover 3 by showing two safeties and then dropping one down in the middle of the field to occupy the middle/hook area. That movement frees up linebackers to play games up front and for the outside linebackers to vacate out to the flats more quickly. Since it happens post-snap, the Bills can stay in their two-safety shell until the last second when either Poyer or Hyde buzz down. Here, Hyde is the Buzz player rotating down into the hook zone. Buffalo is disguising this as Cover 2 Man with the corners all aligned square to the receivers. However, at the snap, the corners bail, and the safeties rotate – giving a completely different look for rookie quarterback Mac Jones. That change in coverage causes Jones to hesitate and misfire.

Cover 1 Robber has the same general principle, but with the safety coming down and everyone else in man coverage underneath. The Bills run a variation of this with some of their pressure packages. Instead of dropping into the middle hole, the safety is now attached in man coverage and one of the linebackers blitz.

It’s a huge luxury to have not one but two safeties that can hold up in man-coverage with some top tier talent. I wouldn’t say it’s smart to isolate them all the time, but again, it gives Buffalo tremendous flexibility to diversify their looks.

Now, it’s Poyer that comes down. Poyer is generally the better coverage guy when in man and takes away the #3 receiver from Carolina – forcing Cam Newton into a sack.

They’ll give that same look with both Poyer and Hyde. Buffalo really isn’t scared to match up either of those guys on premier talent like tight end Rob Gronkowski or a team’s slot receiver. Poyer can get a little over-aggressive at times, but generally has some better click and close ability than Micah Hyde. Hyde tends to be more physical and a better tackler.

An added bonus to all the rotation and movement from Poyer and Hyde is their ability to blitz them off the edge. If they both frequently hang out down near the line of, it makes it much more difficult for teams to figure out if they’re blitzing or not. What looks like a normal rotation down or away can turn into a blitz.

The Bills will also rotate out of some of those pressure or man looks to get to their base two-safety shells where they’ll run a variety of coverages. Here, they’re using a Cover 7 look with a MEG (man everywhere he goes) call at the top of the screen. Cover 7 is a version of Cover 4 with man-match principles that was popularized by Nick Saban at Alabama. In that coverage, the safeties are reading the #2 receiver to the #1 receiver.

That is what Poyer is doing at the bottom of the screen. As soon as he identifies Rob Gronkowski, the #2 receiver, is breaking off his route, he goes to help on the #1 receiver who is attacking vertically. To the top, the Bills should have a Switch call on with the #2 receiver on the line of scrimmage. Usually in those formations, the offense is trying to create rubs. With a switch call, the corner would stay on #1 unless that receiver goes behind #2. That’s exactly what happens, but the Bills don’t switch and instead have man coverage to that side of the field. That creates a rub for Godwin who is aligned outside as the #1.

Work at the line of scrimmage

Hyde and Poyer both have the range and skill to run all of those coverages and disguise is huge in the NFL – especially against elite quarterbacks and offenses. Where Hyde and Poyer start to differentiate is their contributions in the run game and their coverage skills. Poyer might have more tackles, but he really struggles to shed blocks and finish tackles. Neither of them are huge guys, so especially against tight ends or offensive linemen, they can have trouble.

On the flip side, Hyde is much more physical and while he can still get bullied by offensive linemen, he’s much more consistent tackling in the open field. Ultimately, though neither one is expected to be a huge contributor in the run game. Buffalo will walk down Hyde into the box more just because he’s a little more solid there and he has the ability to at least force things back inside.

Having both Micah Hyde and Jordan Poyer on the field is invaluable for the Bills. They allow Buffalo to run whatever coverage they want on defense, disguise, and walk a guy down into the box without having to change personnel. With both signing deals recently and the way Buffalo’s defense is playing, the Bills are in good hands with the dynamic duo keeping a cap on the back end.