The 5 X-Factors for the 49ers against the Cowboys 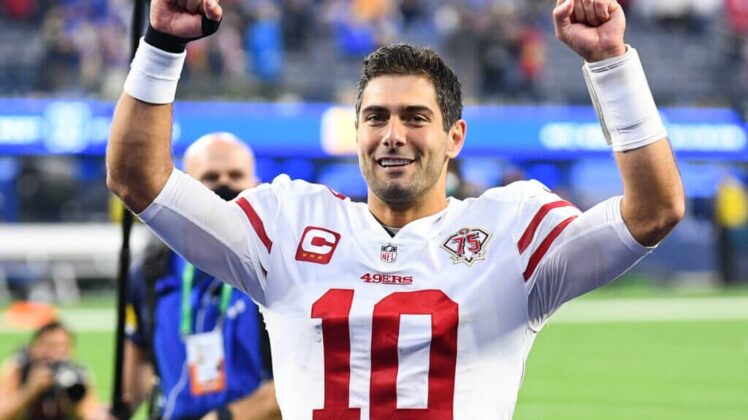 One of the NFL’s most historic rivalries, the San Francisco 49ers vs the Dallas Cowboys, has fizzled over the last decade. Two teams that dominated the 80’s and 90’s are finally back in the playoffs against each other in what should be the best matchup of the weekend. On one side you have one of the most exciting offenses in the league with some of the biggest names in the league with the Cowboys. On the other hand, you have blue-collared meets Silicon Valley innovation with the 49ers. I’m a 49ers fan so of course I’m excited about this game, but I think most NFL fans feel the same way. So, how will the 49ers pull off the upset and who will be responsible for them winning? Here are my five x-factors who need to step up for the quest for the franchise’s sixth Super Bowl to carry on.

Let’s get the obvious one of the way. It’s simple, if Garoppolo can take care of the ball then the 49ers will likely win this game. Easier said than done. The Cowboys have forced an NFL league-leading twenty-six interceptions this year and have returned five of those for touchdowns. They play fast and aggressive but will give up the big play. The 49ers need the smart version of Jimmy, taking the easy throw instead of rolling the dice. In the six losses in which he started, Garoppolo threw an interception in all of them. However, in the 9 wins he started, he only threw an interception in two of them. It’s not rocket science here.

Mitch Wishnowsky (or his replacement)

Everyone has seen how crappy the 49ers special teams have been this year, but up until a month ago Mitch Wishnowsky was putting up a great year from a punting perspective. That has changed the last three games though. He simply isn’t getting enough distance on the ball and is no longer forcing muffed punts, something that happened twice against the Bengals and really won them that game. As the best special teams player this year, he will need to have a strong showing this weekend. However, he might not even play this week because of a concussion. Whoever replaces him will need to pin the Cowboys deep into their own territory and not allow any special teams errors, something the team has seemingly had once a game at least.

I’m not sure what has gotten into Arik Armstead the last two weeks but holy moly I’m liking what I see. I was upset like most fans when the team decided to resign Armstead over fan-favorite Deforest Buckner, but games like last weekend are why Armstead is a rich man. In the last two weeks he’s put up three sacks, which is half of his entire season’s total. It’s unlikely that Armstead will put up huge numbers this week as the Cowboys’ offensive line is a relatively strong unit. What he can do is be a disruptor. Push the pocket from the interior so that Dak Prescott will have to roll out or be forced into a bad throw.

The best fullback in the game will have his hands full. Cowboy linebackers Micah Parsons and Leighton Vander Esch will be focused on the 49ers rushing attack and will be aggressive with blitzes. In order to create running lanes for Elijah Mitchell and Deebo Samuel, “Juice” will need to win his one-on-one blocks. Of course, he always does this, but this defense will be the fastest the 49ers see all year. He may need to become more of a weapon as a pass-catcher too. We’ve seen Kyle Shanahan loves to run Juice on a wheel route where he sneaks out of the backfield and down the sideline. Look for them to run that play again as a way to beat a blitzing defense. He may only come up with a catch or two, but expect the unsung hero of this offense get his name called more than usual this week.

A lot of 49ers fans are excited about the progress of Thomas, and they should be. He went from looking like a lost cause to making the play that gets them into the playoffs. While going against the Rams is a great test, the Cowboys passing attack is even better. Amari Cooper and CeeDee Lamb are a tough duo and Prescott is better than Matthew Stafford. Thomas doesn’t need to come down with an interception (that would be nice though) but he does need to continue to make plays. The Cowboys will target him early and often, so Thomas needs to continue to be aggressive in making a play on the ball.