It’s rare to see a player start four years, but it’s even rarer to see a player get a start in five seasons in college. Pittsburgh’s Kenny Pickett showed some promise in 2017, starting two games for the Panthers and looking like the future of their program. The following three seasons fans were left wanting more. Pickett had flashes of brilliance but put up mediocre after mediocre year. Then, 2021 happened. The redshirt senior exploded for forty-two touchdowns and finished third in the Heisman voting. He led the team to an eleven-win season and won their first ACC championship. As a draft prospect, many see Pickett as the top quarterback and a top-ten pick, but there’s some concern. While talented and a more developed prospect, Pickett will have to prove he just wasn’t a one-year wonder to teams.

While not an elite athlete, Pickett is an expert at using his legs to keep plays alive. Instead of putting his head down and trying to pick up some yards running, Pickett does a good job of keeping his eyes down the field. One of the problems I see with college quarterbacks, like Liberty’s Malik Willis who is also considered a first-round pick this year, is that they want to run first when escaping the pocket. While that’s good to get chunk yards, you’re likely to take more hits and miss out on possible receivers down the field. However, when needed, Pickett can be used as a runner but it’s not his first option. Most of the successful new-age quarterbacks have this ability and it’s something that will make Pickett that much more ready to produce in his early years in the league. 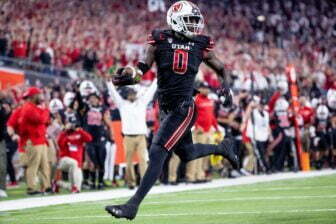 With over 1600 pass attempts and appearing in 52 games, Pickett has as much film as you can possibly have for a college prospect. While most of those games might not be his best, you can see his development as a passer. Most rookie quarterbacks need a year or two to really understand the position and how to read defenses, and not rely solely on talent. However, for Pickett, he should be ready to start as a rookie without hesitation. Hall of Fame head coach Bill Parcells had seven rules when drafting a quarterback and those rules are largely based on experience and success in college. It’s not too often that a high prospect hits all seven of those rules, but Pickett does. He’s a prospect that both throwback and innovative football minds can agree on as a first-round prospect.

It’s one thing to throw a catchable ball, but it’s another thing to throw the ball to where your receiver can make a very easy catch. A lot of these new-age quarterbacks throw the ball 100 miles per hour, but it’s tough to catch based on velocity and where they put it on their receiver. Pickett doesn’t have the strongest arm but puts the ball right into his receiver’s hands. He also does a good job of not throwing behind his receivers and either leads them or hits them in the chest. What you miss with his inability to make “wow” throws (more on that later), he makes up for by making the right reads and throwing accurate passes.

If you’re looking at drafting a future All-Pro or MVP at quarterback, Pickett isn’t your guy. While I think he can have a nice career and be a solid starter, I just don’t see an avenue where he becomes as good as Joe Burrow or Justin Herbert for example. I’m not trying to discredit Pickett as a player here but just simply stating facts and the fact is that Pickett is benefitting from a weak quarterback class. If you compare him to last year’s prospects, he’s likely the fifth or sixth best. 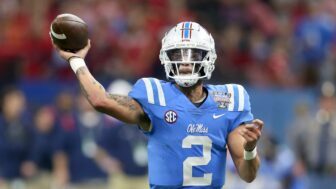 In an era where many of the best young quarterbacks can beat you with throws down the field because of their strong arms, that’s simply not Pickett’s game. While he did show nice touch at times, he lacks the consistency and strength to scare defenses. At this point in his development, I don’t see him all of a sudden becoming Mahomes-like with his arm strength, but he can still get better as a deep thrower. More reps and experience pushing the ball down the field can rectify some of these issues, but I’m just not overly confident in it happening.

In a quarterback class full of question marks, Pickett is a pretty well-known commodity. We have seen him play for over four years and there’s a ton of film on him. While he lacks the upside in my opinion to be a high draft pick, at this point I expect him to be the first quarterback taken. To me, he’s the second-best quarterback behind Nevada’s Carson Strong (I’m in the minority on this), but he’s no doubt the safest quarterback prospect. I can easily see him as a mid-level starter in this league for the next decade. And while people expect every top-ten quarterback prospect to be the next Tom Brady, it’s good to have a reliable starter on your team.