Tyler Higbee is the unsung hero of the Rams offense

Tyler Higbee might not have huge numbers, but he’s an unsung hero of the Rams offense. Sean McVay operates out of 11 personnel. A tight end or H-back is essential for the offense to run smoothly and allows McVay to add gaps in the run game and create mismatches in the pass game. Higbee won’t wow you with his athleticism or route guys up, but he’s a big body and he is great at blocking in space.

McVay tends to like to run wide zone weak. That means running away from his formational strength and particularly, away from Tyler Higbee. In the wide zone scheme, the backside of the run concept is as important if not more important than the frontside. Cutting off the angles of linebackers and safeties or walling off defensive ends in pursuit creates cutback creases and explosive gains.

Higbee is one of the best at that particular type of block and is a big reason why McVay likes to run weak. Higbee is more athletic and better in space than a tackle would be in his same position. Climbing and walling off defenders in space is not easy.

The power of wide zone is its ability to hit anywhere along the line. Linebackers have to flow to the horizontal threat, but if they get out of position, they can quickly get gashed on a cutback. The Cardinals’ defensive tackle #90 Rashard Lawrence immediately crosses the face of the offensive guard to the playside. That tells Cam Akers to start to read backside for the cutback. That’s when Higbee’s block comes into play. The backside guard and tackle are engaged with their defenders and Higbee uses a pushover technique to help the backside tackle handle Chandler Jones. He then climbs to the linebacker. You can see where a huge lane would open up if #18 Ben Skowronek was able to wall off his own block.

Those second level blocks don’t always end up mattering, but when they do, they create big plays. Higbee consistently gets onto his man at the next level. 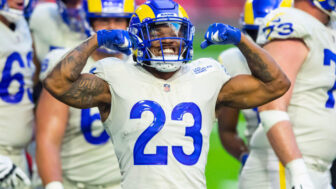 Higbee is also able to hold up relatively well in pass protection which only adds to his versatility, especially with an injured Andrew Whitworth in the playoffs this year. The Rams have used him a number of times to give chips to help backup left tackle Joe Noteboom. With Noteboom also getting injured against the Bucs, Higbee will likely be giving a lot of help against the likes of Nick Bosa on Sunday.

All of Higbee’s work in pass protection and run blocking bleeds into McVay’s scheme to get him open on boot action. The releases he takes for those pass plays all look strikingly similar and puts the defense in conflict.

Higbee’s versatility is what makes him so impactful even if he’s not touching the ball. The Rams align him all over the field to create matchups, pull defenders away, and challenge the defense to adjust. He’ll line up outside, in the slot, block for RPOs, be inline, and do anything that you ask him to.

Tyler Higbee just gets the job done. It might not be flashy, he might not have a ton of yards, but he’s consistently in the right place at the right time. Sean McVay uses him to help set the strength of the defense and attack second level defenders. He then schemes him open off of run concepts. He helps the Rams offense stay on schedule and will be an integral part of their potential Super Bowl run.