How can the 49ers beat the Rams for a third time 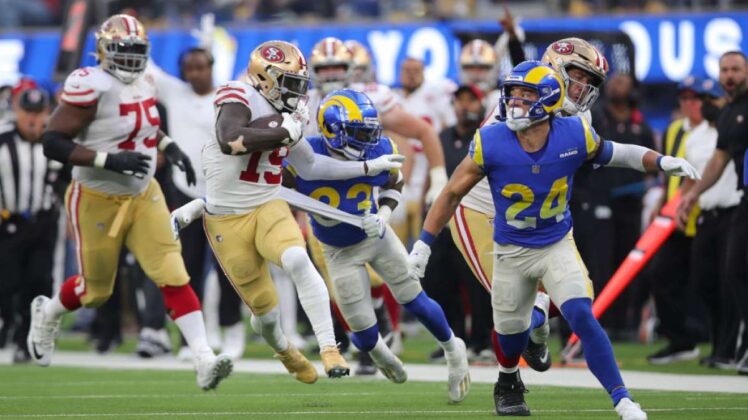 Need an unsung hero to emerge

In week 18 against the Rams, it was Ambry Thomas. Against the Cowboys, it was Charles Omenihu. And finally, against the Packers, it was Jordan Willis. These guys are rarely talked about among the 49ers faithful, but they’ve been integral parts of the last three wins. In order to win these close playoff games, it takes the unlikely hero to step up and make a play big (or two). Will it be a big punt return from Travis Benjamin or maybe even a forced fumble by Kevin Givens? I don’t know, but a big play from the lower end of the roster will need to step up.

The Rams secondary is solid but has shown that they can get beat deep. Brady was able to find Mike Evans for a long touchdown against the Rams best corner, Jalen Ramsey, and there have been other times where their aggressive defense opened up things on the back end. In particular, their safeties have been destroyed by injuries to the point where they had to bring back Eric Weddle, who has been out of the league for two years. Look for Shanahan to look to run some plays for Kittle, both across the middle and up the seam.

Score on the first drive

There’s almost no chance the 49ers will be able to get away with trailing 17-0 again. I’m not saying they need to replicate their week ten performance by going up 21-7 at half (though that would be nice), but they also can’t be taking haymakers in the first quarter. A long, methodical drive to keep the Rams offense off the field early is just what they need. Look for them to of course want to run the ball, but expect play action and quick slants to get Jimmy is a rhythm.

Anybody but Cooper Kupp

Last week I wrote on how the 49ers needed to stop Davante Adams. While Adams did go for 9 catches and 90 yards, he got half of those yards on the first drive. They were content with dump-offs to Aaron Jones and forcing Rodgers to look at their other receivers, except Rodgers locked in on Adams and in result their offense suffered. It’s going to be tough to stop Kupp since nobody has done it this season, but you have to try. Beckham Jr. has come into his own the last month or so, but you still would rather him or Tyler Higbee make the big play than the guy you know Stafford in going to want to target.

This one is a given, but still can’t stress it enough. Even if things go rocky early, the 49ers have to continue to stick with their identity of running the football. The Rams will be prepared and know that it’s coming, but it’s going to come down to who wants it more and who is the tougher team. The 49ers have proven to be the more physical team in their six-game win streak against the Rams, but those games were during the regular season. The postseason is a different beast and I would doubt that Aaron Donald leaves the field for more than a handful of snaps. In games where every play matters, sticking to what you do best has to be the only strategy.