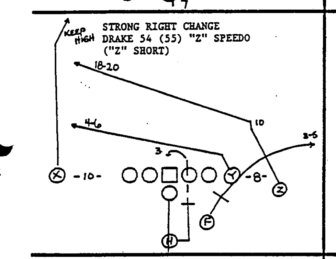 00 personnel means that there are five receivers on the field. Usually, that means teams will run empty formations with nobody aligned at the running back position. As a result, there are zero running backs or tight ends on the feld. 00 personnel is used in passing situations where the offense wants to spread out the defense or create matchups. While 00 personnel is predominantly used for passing, there can be quarterback runs like a draw.

It is important to remember that personnel is called in the huddle. Even if the offense lines up with nobody in the backfield and five players split out at receiver positions, that doesn’t necessarily mean that they are in 00 personnel. There could be tight ends and/or running backs aligned at receiver, which would change the personnel call. Formational alignment is independent of personnel groupings.