How the Cincinnati defense adapted to shut down the Chiefs offense 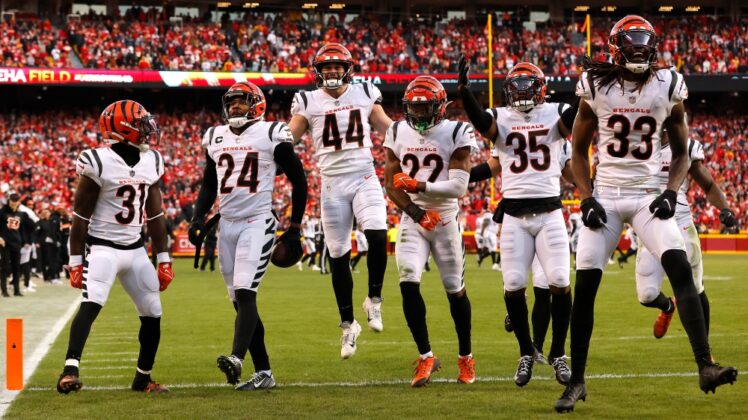 The Chiefs started out with three straight scoring drives against the Bengals in the AFC Championship game. Then, it all came crashing down in the second half. After Kansas City got stopped on the goal line, they would only muster 83 yards and 3 points in the rest of the game. Some of that was Patrick Mahomes struggling with his decision-making and accuracy, but a lot of the credit has to go to the Bengals’ adjustments on defense.

For much of the season – especially when the Chiefs were in their slump – the league had “figured them out” by running two deep safeties and forcing Kansas City to be patient. With two-safety shells, teams were wagering that Patrick Mahomes and Andy Reid wouldn’t be able to consistently string together 10-play drives down the field. The extra players in pass coverage prevented the explosive play, and they’d rally for tackles. And for a time, they were right. Mahomes wasn’t being patient and was forcing deep shots that weren’t there.

Two-safety looks in the first half

However, running two safeties leaves space underneath. That allowed for the run game to get going and the Chiefs leaned back into some of their RPO and quick game looks where they can get tight end Travis Kelce or receiver Tyreek Hill isolated and with an opportunity to run after the catch. Mahomes took what was there, and the Chiefs were back in business.

So, defenses – and the Bengals were faced with a conundrum. Do you keep a lid on things and force the plays underneath, or do you get aggressive, go with man coverage, and bring a safety down. Unfortunately for the Bengals in the first half, they had the worst of both worlds. They let up long sustained drives of 11, 7, 9, and 8 plays where the Chiefs were also able to sprinkle in the occasional explosive play. In the first half, Cincinnati ran two-safety shells 66% of the time. They mixed up the coverages and didn’t stay vanilla, but they did not want the Chiefs to get their big gains.

Whenever the Chiefs isolated Tyreek Hill as the single receiver in a trips formation and the Bengals were in Cover 4, Cincinnati would choose to double Hill. However, that means that the rest of the Bengals defense were in man coverage.

In Cover 4, the single receiver will often get what is called a MEG call which means the corner is in man coverage on them. The weakside safety has eyes on #3 vertical from the other side of the formation, the strongside safety is keying #2, and the corner is taking #1 vertical. That pulls eyes away from the solo receiver and creates that man-on-man matchup. However, the Bengals did the inverse and instead had the playside safety key #3 vertically, the slot corner on #2, and the corner outside on #1. That leaves the backside safety to help on Tyreek Hill, but prevents him from being involved on the trips side. So, when all of those players have to carry vertical routes, that’s when we saw Mahomes take off to pick up chunk gains. Defenders are running with their backs turned and that leaves space for scrambles.

Then, when the Bengals went to pure man coverage, they were having trouble covering the Chiefs receivers one-on-one.

That was the issue in the first half for the Bengals defense. Play two-deep, get dink and dunked, play man coverage, and get beat by the Chiefs’ talented receivers. In the second half however, the Bengals defense changed to running more single-safety looks with only 40% of their coverages using two-safeties – 20% less than they did in the first half. That was in an effort to slow down the run game, attack plays underneath, and prevent the Chiefs from taking the easy throws. But, the Bengals got to their single-safety looks a couple different ways. They ran some drop eight, some Cover 3 Buzz, Cover 1 Robber, and mixed and matched coverages to force Mahomes to process. And it worked.

In Cover 1 Robber, one of the safeties is dropping down into the middle hole. Everyone else is in man coverage with the other safety protecting the deep middle. That robber player was crucial in helping create brackets on both Hill and Kelce and preventing the intermediate and high crossers that the Chiefs love to run. It’s risky, because you’re manned up elsewhere, but Cincinnati did a great job of taking one of those two guys away on each play.

Mahomes clearly had difficulty throwing with anticipation in the second half, in large part because of the tighter man coverage and different post-snap looks he was getting.

The Bengals defense also ran some Cover 3 buzz, which for simplicity’s sake, is essentially just Cover 1 Robber, but with zone behind it instead of man coverage. It accomplishes the same goals while avoiding having issues with Mesh concepts or isolated matchups.

How single-safety looks made it tough for the Chiefs

With the intermediate crossers walled off by the Robber or Buzz players and extra eyes bracketing Kansas City’s two big targets, the Chiefs offense stalled. There were no more easy passes underneath to get rhythm, and the Bengals pass rush started to get some pressure and help the secondary avoid the big back-breaking plays downfield.

Then, when the Bengals did get into two-safety looks, they switched things up. They started to run more base Cover 4 with the backside safety keying #3 and they also ran some pure Cover 2 to take away the quick throws to the flats.

They even threw in some Tampa 2, which gave Cincinnati another way to occupy the middle of the field and wall crossers – now with a linebacker instead of a safety dropping down.

This all culminated with Mahomes’ last two throws of the season – both of which should have been intercepted. Mahomes had bad ball placement, but was also trying to process slot blitzes, what coverage was being run behind it, and navigating a reinvigorated Bengals pass rush.

On 3rd and long in overtime, the Bengals are running their Cover 1 Robber with the safety coming down and getting underneath Tyreek Hill’s high cross. That presence forces Mahomes to put more air under the ball to get it over the safety. That extra time allows Jessie Bates to make a play leading to the interception.

The Bengals had an inauspicious start to the AFC Championship game. However, they showed a willingness to change and proved their ability to adapt. They executed at a much higher level and their adjustments put an end to Kansas City’s season. If their defense plays with the same versatility against the Rams, they’re going to have a shot. Burrow and Chase might grab the headlines, but as the old saying goes: defense wins championships.