For a quick overview on personnel naming, click here.

The tight end matchup can be a huge advantage. If they are a positive player in run blocking, offenses can use them to add an extra gap to be defended. That forces the defense to make a choice on who they bring in to combat that. Do they bring in a heavier linebacker to match the physicality of the blocking, or do they stay with a Nickel player that can cover better in the pass game, but is at a clear disadvantage against the tight end in run blocking.

It’s a constant cat and mouse game between offenses and defenses. If you have a dominant tight end that can block and catch like George Kittle, you can stay in 11 personnel yet align in running formations or more pass-focused formations with the tight end split out like a receiver. The defense then has to decide how they want to play the personnel package. Remember, the defense has to sub in different players before they know what the offense is going to align in. All they can see is the personnel that are in the huddle. 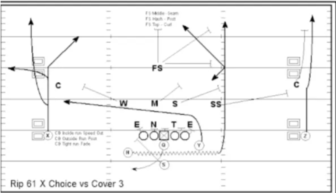 Also Read:
Run N’ Shoot Offense
Processing…
Success! You're on the list.
Whoops! There was an error and we couldn't process your subscription. Please reload the page and try again.
Share:
Thanks for subscribing! You should receive a confirmation email shortly asking you to verify your subscription.