Devin Lloyd has been a standout linebacker at Utah and is projected to go in the first round of the 2022 NFL Draft. The 2021 Pac-12 Defensive Player of the year racked up 256 tackles, five interceptions, and three touchdowns during his time in college. He plays with good speed, range, and can both take on and beat blocks in space. He has a knack for being around the ball and while he can play a little passive at times and struggled when blitzed, he will make a high end linebacker at the NFL level.

Devin Lloyd is long at 6’3” and 235 lbs. He’s got great range and can track guys down from sideline to sideline. He consistently takes good angles, hustles to the ball, and is a good tackler in space. That means he likely skews as more of an outside linebacker or Will linebacker in the NFL where he can have help behind him which will allow him to make plays. 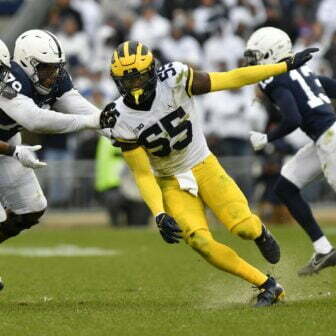 Lloyd’s length really helps him in taking on blocks. He could be a little more consistent with his hand usage, but for the most part, he can take on offensive linemen when they get up to him at the second level or out on the perimeter. His arm length helps keep linemen at a distance, while he diagnoses the play and sheds to chase down the ballcarrier or fill the gap.

Even if he’s not able to make the tackle, he’s unafraid of sticking his nose into traffic and eating up space. Here, he diagnoses that Oregon is running a G/H counter and takes on the inside shoulder of the guard which helps him wrong arm and eat up the second puller as well. That allows his fellow linebacker to scrape over the top and help make the play with Lloyd blowing things up before things can get going downhill.

For a middle linebacker in a 4-3, Lloyd got his hands on a surprising number of balls this year. He came down with four interceptions and turned two of them into touchdowns. He’s a natural catcher and can feel receivers in space while keeping his eyes on the quarterback.

While Lloyd is mostly a pretty intuitive player, he does have a tendency to stop his feet and to be slow to read at times. That can cause him to struggle to change direction and to let linemen get to him at the second level. As mentioned, he could use some work on using his hands more consistently when engaging with linemen as well.

Lloyd had the occasional pass rush move, but for the most part, struggled when blitzing – especially when walked up at the line of scrimmage. He rarely used his hands and instead conceded to getting blocked and was easily handled by guards and tackles.

Devin Lloyd has the skillset to be an impact linebacker at the next level. He has range, good instincts, and can take on blockers in space and in the box. While he has some things to work on, he’s likely to go in the middle of the first round and should be a day one starter.