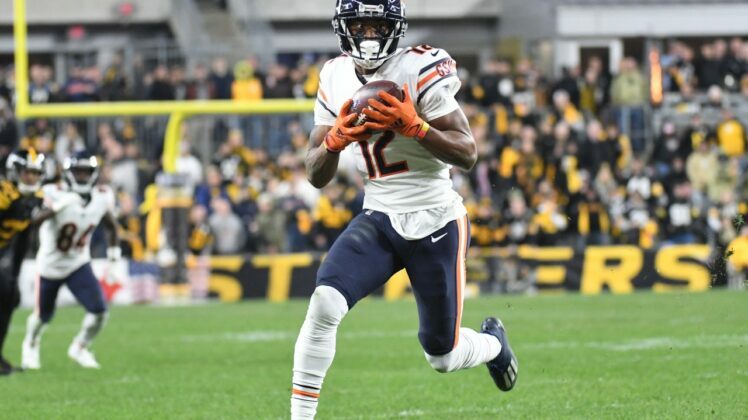 One of the most exciting weeks of the year is about to get started. Of course, we all love the NFL season but the first few days of free agency are crazy. Heck, we’ve already seen several huge trades over the past week. Below are our predictions for our top twenty predictions:

We all saw how bad the Bengals offensive line was during the playoffs. Joe Burrow won’t stay healthy if he takes as many hits as he has the last two years so expect the Bengals to address the line in free agency and the draft. Armstead would be a huge get for this franchise that’s been notoriously cheap in free agency.

Miller comes home! After a midseason trade and getting his second ring, Miller sees the championship window wide open for the Broncos. He still has deep ties to the area and was very professional throughout his tenure with the team. Living in Los Angeles is nice, but he can likely make more money in Denver and be around a franchise he knows very well.

Devante Parker and Will Fuller didn’t work out last year in Miami, but Jaylen Waddle looks like a star in the making. With ample money to spend, getting a guy like Robinson will do wonders for Tua’s career. Robinson will 100% not return to Chicago and will take a big-money contract to a situation where he should thrive.

The Colts are at a crossroads and need to start winning playoff games. While their quarterback situation is a mess, they could use an edge rusher to take this defense up another level. Jones is not pleased with the Cardinals and them not resigning him already, so he will go to a contender that will give him the money he desires.

While the Raiders defense did play better in 2021, it still wasn’t good. They relied heavily on Casey Hayward at corner, but he’ll be 33 next year. New head coach Josh McDaniels is familiar with Jackson from New England and will look to make a big splash by bringing him to Sin City.

While remembered for the missed tackle in the “Miracle in Minnesota” play, Williams is a very good safety. His durability and consistent play will be much needed in Philadelphia, where some reinforcements are needed in the secondary. With some money to spend and three first-round picks, the Eagles are going to be an interesting team to watch.

Brian Burns and Reddick are a great one-two punch on the defensive line and the Panthers should try to keep those intact for the foreseeable future. After signing a prove-it deal last year, Reddick will aim for more long-term security and could even get a four-year deal if one team thinks he can replicate the production from the last two years.

There’s still a market for Gilmore who was the NFL’s Defensive Player of the Year just two years ago. However, he’s on the wrong side of 30 and has been banged up the last two years. Surely he’ll want a two or three-year contract but will have to settle for a one-year deal that is highly incentive-based. The Seahawks need to rebuild their secondary and will take a swing on Gilmore to recapture some of his youth.

With having some of the most money to spend in free agency, expect the Jets to sign a few key veterans to help with developing a young roster. Scherff has quietly become one of the best guards in the league the past few years and is exactly what New York needs to protect Zach Wilson. Scherff and last year’s first-round pick Alijah Vera-Tucker would form a strong interior line.

Regardless of his age, Mathieu is still one of the baddest dudes in the league. The Chiefs are going to likely be unable to afford the Honey Badger, but expect him to sign with a contender. The Ravens have gotten away with mediocre play in the past because of strong cornerbacks. When those cornerbacks got hurt last year, the whole defense was exposed. Mathieu’s winning pedigree and toughness will do wonders for Baltimore.

Despite having Chris Godwin as a free agent, the Bucs might see Jensen as a higher priority. After Ali Marpet’s surprise retirement announcement, Jensen will be needed to solidify the middle of the line. Also, Jensen has been one of the better centers in the league the last two years and deserves a nice contact.

There are already rumors about Odell wanting to return to Los Angeles despite the possibility of him missing a few weeks at the beginning of the season as he returns from a torn ACL. He’s likely to sign an incentive-heavy contract for just a year or two to try and boost his stock for next offseason. This one makes sense for both sides.

Last year the Jets secondary absolutely stunk. Granted the pass rush wasn’t great, but they had no one who could cover anybody. I personally think Davis is a bit overrated, but he’s a solid starter. A team like the Jets can afford to overpay for starters as they try to speed up this rebuild.

The most electrifying (for good and bad reasons) quarterback in the league will stay in the Big Easy. After looking like a competent NFL starter the first few weeks, Winston went down with a knee injury and the Saints offense looked much worse without him. This will likely be another incentive-heavy deal that could rely on Winston’s ability to stay healthy and take care of the football.

This is one of the toughest contract evaluations to figure out. Campbell was essentially fighting for his NFL career a year ago and now he’s an All-Pro player. Do you pay the player from the first five years of his career or the one that played this year? Likely to take both into account, Campbell gets some financial security and signs with the Broncos, now coached by former Packers offensive coordinator Nathaniel Hackett.

After underachieving his first few seasons in the league, Ogbah has been very good for the Dolphins the last two seasons. The Dolphins will likely be interested in bringing him back, but we can expect to see the Jets pursue a pass-rusher. They thought they had it figured it by signing Carl Lawson, but he missed all of last year with an injury.

I doubt any team will want to commit to Patterson long-term, but I do think a team will take a swing on him for a lucrative, short-term contract. Miami’s new head coach Mike McDaniel is one of the most creative minds in the NFL in terms of designing run plays. Patterson is the ultimate gadget weapon that could unlock the Dolphins mediocre run game.

After being the heartbeat of the Seattle defense the last few seasons, I was mildly surprised to see Wagner get released. Yes, Seattle did save money but now they’re in a full rebuild. Wagner could go-to for the biggest contract, or try to play for a contender on the rise, like the Chargers.

You know we are living in crazy times when Mitch Trubisky is the top quarterback free agent. The Giants seem “committed” to Daniel Jones, but new head coach Brian Daboll is familiar with Trubisky. There’s a chance they start out with Jones, but Trubisky could be the option sooner or later for the Giants. Knowing this is his last chance at a big contract, expect Trubisky to go into a situation where he will feel the most comfortable.

While I’m not a huge Clowney fan, he seems to have found a home in Cleveland. Playing second fiddle to Myles Garrett gives him great matchups and doesn’t put too high of expectations on him to produce. Of course, knowing Clowney he wants to drag things out as long as possible, but expect a Cleveland reunion.