After the Bills were knocked out of the playoffs without Josh Allen touching the ball in overtime, the NFL and its 32 memeber clubs passed new overtime rules. Both teams will now have a chance to possess the ball — but these changes are only happening in the playoffs. The regular season rules will remain the same.

The NFL overtime rule change is the first since 2010, when the league changed the rules so that if you scored a field goal, the other team would still have an opportunity to match or win. The 2010 rules stated that if the team to first possess the ball scored a touchdown, that team would win the game. That resulted in some clearly lopsided odds for whoever won the coin flip. Since 2010, there have been 12 overtime games in the playoffs. The teams that won the coin flip have been 10-2. Seven of those ten wins came on the opening possession of overtime.

The new rules in full are as follows per the NFL:

The rule change adds some strategy intrigue. Does the team that wins the coin flip want to choose to defend first so that they know what they have to match to stay alive or win? Or would they prefer to take the ball and ensure that they get the 3rd possession if the game is still tied? Either way, overtime will be prolonged. At least all players on offense and defense will have one more shot to put their stamp on the outcome of the game before the final whistle blows. 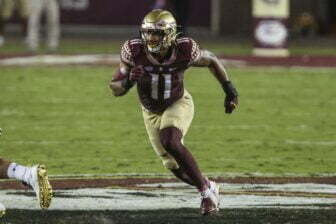 Also Read:
2022 NFL Mock Draft: Post- Free Agency Edition
Processing…
Success! You're on the list.
Whoops! There was an error and we couldn't process your subscription. Please reload the page and try again.
Share:
Thanks for subscribing! You should receive a confirmation email shortly asking you to verify your subscription.