Looking back on Eric Stokes’ Rookie Year with the Packers Eric Stokes jumped into the lineup after starting cornerback Jaire Alexander went down with a shoulder injury early in the season. The Packers received some heat for the Stokes pick just a few months earlier when they selected him 29th overall out of Georgia, but he showed up in a big way for them during the season. Two of his college teammates in Quay Walker and Devonte Wyatt now join him in Green Bay. Those picks have also been met with skepticism, but the Stokes selection turned out to be a hit and Green Bay’s defense has taken significant strides forwards. While Stokes wasn’t perfect, he has the athletic tools to cover some of the technique issues which allowed him to stay in phase and contest catches. 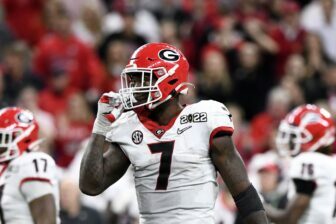 Also Read:
The Packers go against the grain early in the draft

Eric Stokes’ ability to turn and run and click and close are elite. He’s not the twitchiest athlete side-to-side, but even if you do get his hips turned, he has the speed to recover and stay in phase. It’s both a blessing and a curse for him.

Generally, he’s good at using his leverage and staying in phase with receivers. He’s never truly threatened by someone running by him, so he’s comfortable sitting on the back hip or playing a little looser because he feels like he can close space with the ball in the air.

He knows that he has recovery speed and he’ll let receivers get onto his toes before turning and running with them. That allows him to be able to drive on the ball if they snap their route off, but it can also expose him to being run by or easily turned. Because receivers know he won’t turn until they’re close, they can stem him whatever way they want and will know he will turn that way. They can then exploit that and cut the opposite direction to create separation.

Against good receivers, that’s a problem. He allows Terry McLaurin to eat up space, get on his toes, and isn’t strong enough at the break point to slow him down. That allows McLaurin to run right by him. To his credit, as usual, Stokes is able to recover. However, as we’re about to talk about, he is terrible at playing the ball on deep shots at the catch point.

Stokes has lots of work to do playing the ball in the air. He’s almost always in a good position, but struggles to high point, locate, and then attack the ball when it’s in the air. This is a perfect example of Stokes’ ability to recover and use his speed but ultimately misplay the ball at the catch point. He bites on the initial move outside, but is still able to recover and stay on top of the receiver. However, once the ball is in the air, he gets completely lost.

He has the ability to recover, but Stokes’ biggest issue is with eye discipline. He can make up ground, but as he jumps routes or comes up, he almost always gets pulled away by the quarterback’s eyes. As soon as he makes his first move, his eyes are on the quarterback and he loses his receiver.

A lot of his issues underneath come from playing too heavily on his heels. That makes it incredibly tough for him to break quickly on slants, outs, and underneath routes. It can also cause issues in holding up against blocks. The Packers liked to use him in man coverage situations without press. So, he needs some cushion but he can’t be leaning backwards.

These are rookie mistakes that are correctable. Despite some of the technique issues, he was still able to be physical, match teams’ best receivers as a rookie, and be a disruptive force in the pass game.

It’s never ideal to have your rookie corner be your #1. Eric Stokes definitely took his lumps, but he also had really positive moments and acclimated quickly to the pace of the game and the talent he was lining up against. The Packers didn’t shade heavily to his side and felt comfortable running their base defense with him in. He often didn’t get help on teams’ #1 receivers and held up admirably. As he fine tunes his technique and builds some lower body strength, the tandem of Jaire and Stokes could be one of the best in the NFL.