Anatomy of a Play: Shanahan uses FB off of play-action 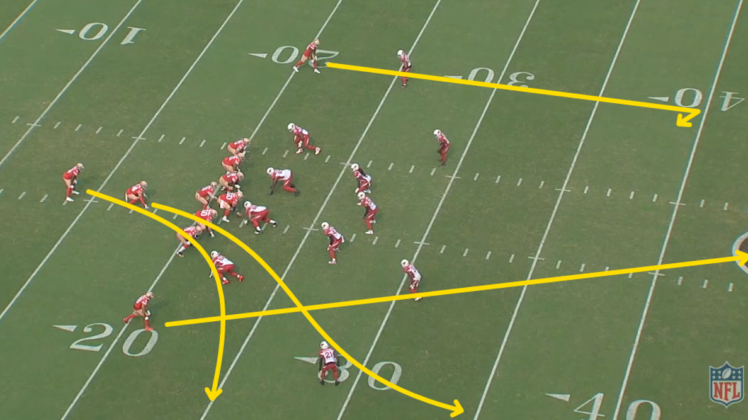 Kyle Shanahan is the king of play-action. He uses motions, formations, and tempo to keep teams off balance. This play is nothing especially unique but it illustrates the bind that the scheme puts defenses in. The wheel from the running back off of the play fake is built into a lot of Kyle Shanahan’s play-action concepts. The wheel is a way of controlling the backside and punishes defenses for a hard flow to stop the run.

The wheel route is an alert for the quarterback. If the defense over commits to the run or gets out of position, the wheel can punish them with an explosive play.

This puts the linebackers into a difficult position. Especially with a dynamic player like Kyle Juszczyk, the linebacker has to decide whether they’re going to come down to meet the lead block or risk staying back for the pass and allowing the 49ers to run power football right at him. In this case, the linebacker comes to meet Juszczyk in the hole. However, Juszczyk runs right by him on the wheel route.

The corner and safety have to commit to covering the route going to the back corner. As a result, you have your fullback isolated on a linebacker that is out of position to cover him.

For the quarterback, there’s a clear progression. The track of the play-action helps take his eyes where they need to be.

Immediately off of the play fake, the quarterback’s eyes go to check the safety. During that time, he identifies that the alert to the back corner isn’t available.

After identifying that both the corner and safety have cleared from that side of the field, the quarterback now reads the wheel route to the flat route. There is no deep corner to that side, with the deep cross taking them away, so now either a linebacker has to carry the wheel route and there will be space in the flats, or the wheel route will win vertically.

It’s a simple read with the quarterback staying on the same side of the field the entire time. Each route enters into his field of vision.

The 49ers get an explosive gain by matching up their fullback onto a linebacker and adding in some scheme to help open him up. The defense now has to respect the vertical threat down the sideline of the fullback which can help open up the run game and make defenders more passive as the game goes along.