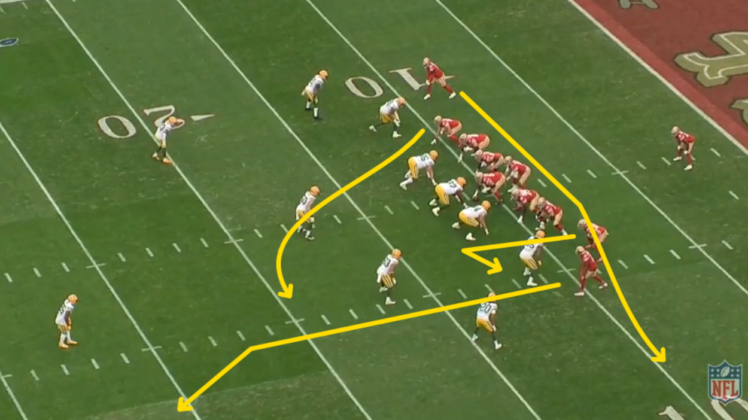 As has been covered before, 49ers head coach Kyle Shanahan is a master of play-action. He continues to find inventive ways to get to his base concepts and put his players in a position to succeed.

As are most of Shanahan’s play-actions, this play is a flood concept with receivers flooding one side of the field at different levels. This stresses the defensive zones and is a huge part of the 49ers offense. That, combined with the heavy run fake and condensed formation, creates space on the perimeter.

Shanahan loves to operate out of condensed sets for two reasons. Firstly, is that by bringing in receivers and tight ends close to the offensive linemen, San Francisco can create additional gaps in the run game. If the defense doesn’t match or effectively cover the increased gaps, there is space for the running back to exploit. Secondly, it brings defenders in closer to the middle of the field. That exposes the edges for the 49ers to get players in space.

The 49ers offense is running a split zone look which is a common way for zone-based offenses to account for the backside defensive end who is unblocked. Typically, the player coming across to deal with that defensive end is a tight end type player. Here, Shanahan is using wide receiver Deebo Samuel instead.

More and more offenses are starting to crunch their receivers across the formation off of play-action because it gives you a more dynamic player in space on the other end. They don’t necessarily need to be big enough to actually block the defensive end because they’re releasing on a route. It makes the defense transfer zones and pick that player up on the other side. With the combination of the tight formation and play-action, a receiver-type now has more speed and space away from the fake.

The quarterback is reading low to high. If the unblocked defensive end attacks the quarterback, they will dump the ball off in the flats. That’s exactly what happens here. The flat defender at the bottom can’t get out to cover Deebo Samuel fast enough and the corner has to sink underneath the deep route. That gives Deebo plenty of space to operate once he catches the ball.

What is a five-yard throw turns into a 15-yard gain. Shanahan’s play design gave Deebo space to operate and an easy throw and read for the quarterback.