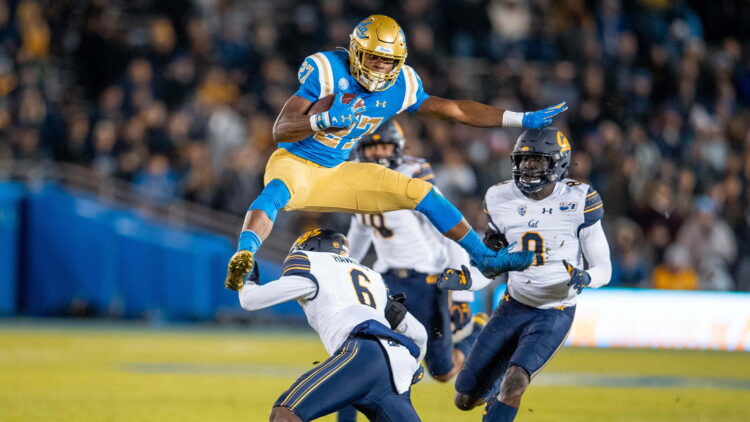 You win championships by drafting well on day two and three. While many superstars hear their names called early on, it’s the rotational players and depth pieces that set apart good teams from great teams. Here are a few players who have the chance to outperform their draft slot.

Gordon followed in his predecessor, Gardner Minshew, footsteps by not becoming a starter until his senior season. Also like Minshew, Gordon put up incredible numbers in Mike Leach’s Air Raid offense that makes him a surefire draft pick. When you watch Gordon, the talent is obviously there but you can tell he needs a LOT of work. He displays a strong arm and does a great job of keeping the play alive when it breaks down. At times, it looks like he’s playing backyard football. I’d wouldn’t be surprised to see him as an early day three pick. If you give him a chance to sit for a season or two, I envision him as a low end starter or high end backup who can win you games.

Evans attended one of the best non-power five programs in Appalachian State and had two very productive seasons. He’s one of the best big play runners in this class and when he hits the hole, he has the chance to take it to the house due to his blazing speed. Might be scheme specific and will thrive best in a zone blocking scheme. Reminds me a lot of Matt Breida and can definitely step in and produce day one.

A throwback, Kelley brings the thunder everytime he touches the ball. While UCLA’s football program has been nothing short of a disaster, Kelley was the bright spot on a stagnant offense. Teams knew that he was going to run up the gut yet they still had trouble stropping him. He may not have the speed most running backs do, but he can play a complementary role as a power back in most offenses. He might not get drafted until the 6th or 7th round, but has a chance to play right away.

If it wasn’t for it being such a strong receiver class, I think Hodgins would possibly be considered a fringe round one prospect. In a deep class, he’s going round 3 or 4 which will be an absolute steal for any team. While not a burner, has great size for the position and uses his body well to fight off receivers. He makes very impressive catches in traffic and is an immediate red zone threat for any team.

Gandy-Golden just might the best player in college football you’ve never heard of. Back to back thousands yard receiving seasons (only played two seasons total), he is another massive prospect who will be able to help out right away. He’ll be a good possession receiver for many years and does a good job of catching with his hands rather than catching with his body. He’s not a great athlete, but a smooth route runner who can get open in a multitude of ways. A round 4-5 pick that will see snaps for a team next year.

After not seeing much time at both Michigan and his first season at UCLA, Asiasi broke out as a quarterbacks best friend this past year. A former five-star recruit, Asiasi might not ever be a huge receiving threat but will do damage as a run blocker. He comes in at around 280 pounds, which is big for a tight end. Despite this, he moves well for a tight end and is best when attacking the seams. Also does a good job of making himself open over the middle, fighting off linebackers. A round 4-5 prospect who will produce as a number two tight end.

Adeniji was a four year starter at left tackle for the Jayhawks and has the athleticism to play a number of positions on the line. He might not be a consistent starter, but due to his ability to excel in a zone blocking scheme, he will make himself commodity. Adeniji will need a year or two before seeing the field, but he’s worth a 3rd round pick.

Playing at St. John’s College, there’s not a whole lot of tape on Bartch that I’ve seen, but from what I have I think there’s a chance he becomes a high-level starter at guard. Played tackle all through college, but i’m not sure him facing NFL edge players is the spot for him to succeed. Will need to adjust to the speed coming from a Division III school, but eventually he’ll get there. He’s a fringe round one prospect that might not get drafted until late day 2.

The Robin to Derrick Brown’s Batman, Coe had substantial hype coming into this season but failed to put up the numbers he was looking for. Despite this, he provides the position versatility that so many teams look for. He could play as a 4-3 end, 4-3 tackle, or a 3-4 end and play all at a high level. He does need to be coached up and sometimes he shows no pass rush moves which is concerning. However, if I’m a team that’s willing to be patient in the third round, I’m running to the podium to make the pick.

Coughlin might be seen as a one trick pony, but in a league where pass rushers are always needed, he has the chance to make an impact. He’s really small for an end and needs to gain some more mass, but his athleticism is what makes him unique. His get off is elite and many of his sacks come because of that. Needs to work on pass rush moves and counter moves, but for a 5th-6th round pick, he’s worth a flier.

Weaver reminds me a lot of Blake Martinez, not a great athlete but is just a playmaker. The PAC 12 Defensive Player of the Year has his limitations, especially athletically, but is a tackling machine. You can hide him in zone coverage on passing downs and will be your leading tackler if you keep him on the field. He’s a second round talent that might fall until the third or fourth. Will need some development but get him on the field and you’ll see results.

Samuels III has the look and swagger that many teams covet in a corner. However, the talent and skill hasn’t matched up to the production quite yet. He’s far from ready to play a lot of snaps at this point, but a team that trusts their coaching will love him. He’s a 5th-6th round prospect that will be a core special teamer early and has the chance to become a starter down the road.

I’ve watched a lot of Utah games the past two years and everytime I watch their defense that’s filled with big-time players, I can’t help but notice Blackmon. He’s always around the ball and plays aggressively on run and pass plays which teams will appreciate. I envision playing strong safety, but he’s a former corner and it shows when matched up against a tight end or running back. He’s a developmental safety prospect, but at worst will become a special team ace. I’d hop all over him in the 5th round

Now here’s the draft’s most interesting prospect. After being kicked off the team at West Virginia, Robinson elected to play in the XFL instead of transferring to another school. His mother was diagnosed with cancer, so he looked for ways to provide for her and that meant ending his college career. The XFL may have only had a handful of games, but Robinson was one of the best players in the entire league despite being the youngest. There are questions about his time at West Virginia and the uncertainty of competition in the XFL. Unfortunately for him, teams aren’t allowed to bring in prospects due to the COVID-19 outbreak so teams will have to gamble in order to pick him. To me, he seems like a kid who’s turned his life around and is hungry to take advantage of his second chance. Might not get drafted at all, but I’m taking a chance in the 6th round.