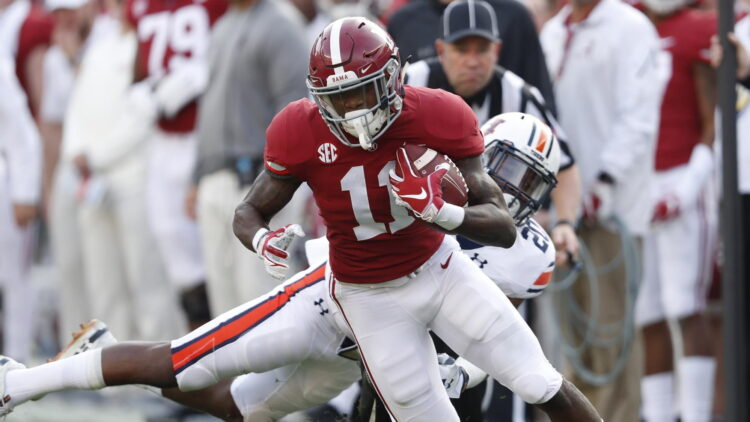 As a lifelong 49ers, I had to do a full seven-round mock for the team. I used the Pro Football Network Mock Draft Simulator (which is fantastic by the way) to make this as realistic as possible. BANG BANG NINER GANG! #Questforsix

The 49ers desperately need another receiver to complement Deebo Samuel and Ruggs is the perfect fit for Shanahan’s offense. He’ll step in right away and become what Marquise Goodwin was to the offense in 2017 when he became Jimmy Garoppolo’s favorite target. Ruggs has blazing 4.2 speed but isn’t just a deep threat as he only had one drop this past season and is as sure-handed as it gets. He’ll become a RAC star, which is tailor-made for the 49ers offense that wants to get the ball to its playmakers in open space. Jerry Jeudy would also be a great fit here, but I fully expect him to be gone at 13. CeeDee Lamb might be ranked higher on most boards, but I just see Shanahan falling in love with a player like Ruggs who will give a new wrinkle to the offense.

Trade Alert! The 49ers move out of this pick and get a second and third-rounder from the Jets who will look to grab an offensive tackle at the end of the first round. The 49ers also throw in their last pick (245 overall) in the trade.

As the 49ers lose a mammoth defensive tackle in DeForest Buckner, they gain a new one in Raekwon Davis. Davis is a versatile player who can line up at a few spots in the defense but his primary position will be playing the three-technique, which is where Buckner played. His best season came as a sophomore and had a lot of first-round hype, but failed to put up equivalent stats the past two seasons. He’s a good athlete for his size and his best quality is occupying blocks which will help free up the other studs on their defense. He might not be an immediate starter, as the team can roll with Solomon Thomas at first and give him his final chance to produce. If that experiment fails again, Davis will be ready to contribute 20-25 snaps a game and provide value in the run and pass rush. It was a close call between Davis, Justin Madubuike, and Ross Blacklock (who all would play the same role in this defense) but there are reports that the 49ers have shown strong interest in Davis which might mean nothing, but I’m willing to bet in a strange draft like this that it means a lot.

To me, this would be a match made in heaven. Hall is a high-character, high-IQ, natural leader that will be able to take over the reins for Sherman once he moves on and will push for playing time right away with Emmanuel Moseley and Ahkello Witherspoon. Would have been a late first-round pick most likely a season ago, he decided to stay for his senior year and missed most of the season due to an ankle injury. He has good size and strength and excelled in cover three, which just happens to be what the 49ers run a lot. He’ll struggle initially in man due to lack of speed and agility, but with the right coaching will be able to develop into an all-around solid corner. He reminds me so much of Richard Sherman, without the alpha-male swagger but is a leader of men that teammates will love and respect. I personally think he’s good enough to start right away, but even if he doesn’t he will be a starter in year two.

Round 4, pick 145 (from Eagles for Brieda)- Hakeem Adeniji, OL Kansas

Trade Alert! The 49ers trade Matt Breida to the Philadelphia Eagles for a fourth-round pick (145). The running back room is getting pretty crowded and Breida is the second most expensive one now who doesn’t have the versatility to match his payday. Also, he’s a free agent after the season and looks pretty unlikely that he will resign. Time to get some value for him.

Adeniji is a good athlete but needs to get stronger to play at the next level. Played left tackle all four years at Kansas, but might be asked to play guard which offers him positional versatility that Shanahan covets in all his players. Due to his athleticism and IQ, he would fit best in a zone-blocking scheme where he can pull and get out in space. While he’s not ready at all to play right now, but essentially use a redshirt year for him to get stronger and refine some technique and he could be a starter at tackle or guard in a few years.

With a serious injury to Weston Richburg and releasing Mike Person, the 49ers depth at center and guard is suspect to say the least. Harris is undersized but is an athletic center prospect who fits best in an outside zone scheme. He will get beat against the bull rush, but when he’s able to pull or get to the second level he becomes a human wrecking ball. Richburg could be ready week one but has had relatively serious injuries the past three seasons and can’t count on him long-term. Harris will be able to step in at a moment’s notice at center, but can also fill in at guard. With Ben Garland being a replacement-level player, it would be wise to look at the long-term for interior linemen possibilities.

Brooks Jr. has a lot of qualities in common with current safety Jaquaski Tartt, who’s a free agent after the season. Both are strong tacklers who have no problem laying the wood and both are also good at defending in shallow areas where tight ends tend to operate. However, Brooks Jr. struggles in deep coverage due to his lack of speed. I’m not overly worried about that as the 49ers usually run a cover 3 and have a free safety play deep center field. Brooks Jr. needs to continue to develop a better feel in the passing game, but is the aggressive tackler needed for a strong safety. He’s an immediate upgrade over Marcel Harris who can’t defend a rolling chair in coverage, so it would be wise to look at the future of strong safety if they’re unable to lock up Tartt long-term.

All offseason the 49ers have been attached to different free-agent tight ends. From Austin Hooper to Jordan Reed, the team is in the market for a player who can give Kittle a rest more often. Ross Dwelly is a nice player but after losing Levine Toiolo to the Giants and the only other tight end on the roster is Daniel Helm. Pinkney has the tools to be a good player, but had a poor season and combine that plummeted his stock. He has good hands and is a solid blocker, but lacks the speed or quickness to beat coverage in man. However, in year one he can be utilized as a blocker and eventually develop into a solid #2 tight end. At the point in the draft, it’s worth taking a risk on a player who will provide value early in his career.

The 49ers need to build corner depth with Sherman, Williams, and Witherspoon all being unrestricted free agents after the season. It’s unlikely that the team brings all of them back and there’s not much proven depth behind them at the moment. Samuels III is an athletic specimen who needs time to develop the technique needed to play in the league. Stash him on the practice squad for a year and then give him a chance to compete for a role in the future.