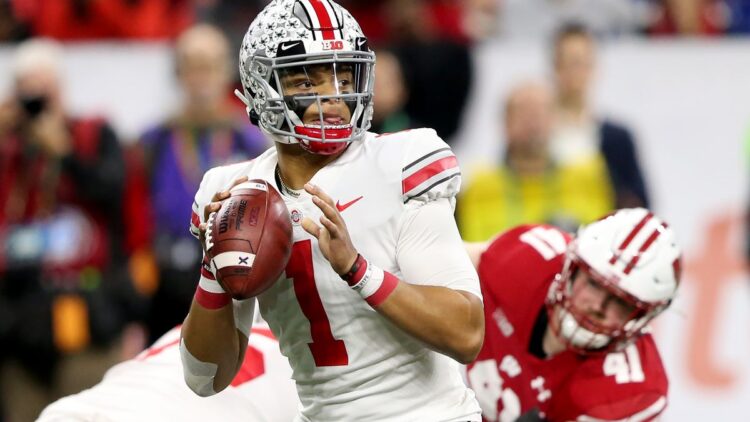 When Justin Fields committed to the University of Georgia out of high school, many asked why? Jake Fromm was a true freshman coming off of a National Championship game appearance and this meant Justin Fields wouldn’t be the starter for two years minimum. However, after transferring to Ohio State and having an amazing first year as the starter, many are asking why did Georgia let this guy go? In most years he would be the odds on favorite to be the number one overall pick, but with Trevor Lawrence slinging the rock in Clemson, Fields is viewed as QB2. I don’t want to spoil it too much, but I have to say off the bat that when I watch Fields I can’t help but feel like I’m watching Dak Prescott with more upside and pure speed. And if you actually know football and don’t just listen to shows like First Take, you’ll know that’s a hell of a comparison. While I still like Lawrence a bit more, Fields is a legit franchise quarterback who will make one team very happy in the near future.

The Buckeyes didn’t ask Justin Fields to throw deep too often, but when he did…. wow. Most throws were on the money, which most college quarterbacks struggle when attacking downfield. He did a great job of leading his receivers too, making sure that they could run after the catch. While his arm is strong enough, it isn’t elite but the accuracy is the most important part. Plenty of quarterbacks can throw far, look at past quarterback busts like Jamarcus Russell and Kyle Boller for example. Both could throw the ball a mile but couldn’t hit the broad side of a barn. Fields is surgical though. He sets his feet and drives the ball in a position where only his receiver can get it. For a mobile quarterback (which we’ll cover soon), being able to push the ball down the field opens up so many possibilities for the near and the future.

Justin Fields claims to run a 4.4 40 yard dash time, which is elite for any position, especially quarterback. I don’t know if the tape reflects him being THAT fast, but the quickness and footwork he displays are some of the best I’ve ever seen. His feet never stop moving in the pocket and he escapes pressure effortlessly. He looks like a natural making difficult situations look easy. Ohio State likes to run the ball and incorporates a lot of zone-reads, but a season ago J.K. Dobbins couldn’t be stopped which reflects Fields modest rushing yard totals, so don’t judge his abilities based on stats alone. He does well scrambling outside the pocket and keeping his eyes down the field, showing that he’s not looking to tuck the ball and run at the first sign of pressure. I understand protecting his health, but I’d like to see more design runs for Fields and have them take advantage of one of his better traits.

Many quarterbacks who are faster than most of the opposing team’s defenders want to run around and utilize their quickness. I mean, why wouldn’t you. They have more than likely done that their whole career and old habits are hard to break. However, fast guys eventually get slower. Fields has the comfortability in the pocket of a ten-year NFL veteran as he drops back and delivers strike after strike. He’s very fundamentally sound and at 6-3, 230 pounds, he has a good frame that makes him comfortable in the pocket knowing he can absorb a hit. Granted, he’s so quick that he’s a tough man to hit. A reason why he was able to keep 67% of his passes was that he has no problem taking a two or three-step drop and using his arm to beat teams, rather than his legs.

I’m hesitant at times to say Fields is an accurate thrower because as I go through his games I’ve noticed so many missed throws that a quarterback of his talent should be making with no problem. Many times he’d have receivers open with a few yards of cushion and simply overthrow them. It’s not a mechanical issue, as he’s textbook in that department, and could just be a simple issue of being a first-year starter in college. If that’s the case, then I’m not worried. But if this continues to be a problem this upcoming season then NFL teams will surely be worried.

For a guy who had three interceptions all year (two of them coming in the National Semi-Final), I was shocked at some of the decisions he made. Maybe it was my fault for setting expectations too high, but it seemed like every game he had an interception that was dropped or misplayed. I’m not saying he makes poor decisions regularly because that’s not entirely the case. I am saying though that you can’t consider the three interceptions as the end all be all stat. A lot of his problems derives from locking into his first option and not realizing that that option might not be your best. You can have a favorite target and look for him on most plays, but utilizing the second, third, or even fourth read is needed to be an NFL franchise quarterback. Many quarterbacks develop the mental processing of the game, but some don’t every get there and don’t have the longevity they had in mind for their careers.

In conclusion, Justin Fields has the aptitude to be a successful NFL quarterback and is a very sound prospect. I envision him being a high-level starter in the NFL for a long time, but may never be in consideration for the best quarterback in the game at any point either. That’s not an insult though, he’s a proven winner and has big-play ability. My earlier comparison to Dak Prescott will continue to be the one I use, as they have the almost exact same height and weight, both mobile, and both have elite throwing ability. He’s a surefire top-five pick and I’m going to call my shot now… I can see him becoming a Washington Redskin. Ron Rivera had Cam Newton has his quarterback, with much success and Fields shares similar qualities with the upside to be more accurate with the football.