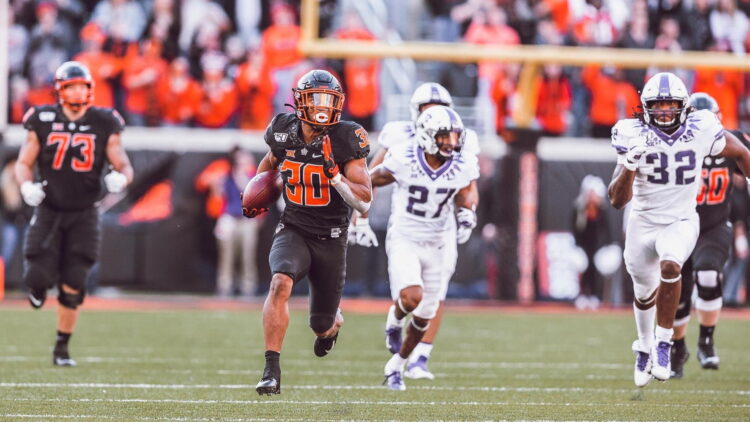 Not only is Chuba Hubbard the best name in college football, but he’s also the best running back in college football. After rushing for 2,000 yards as a sophomore, Hubbard figures to once again lead the Cowboys high-powered attack. The offense runs through him, which doesn’t happen too often for a running back at a major D1 school. Hubbard is an accomplished track star and he might be the biggest home run threat in the nation due to his incredible speed. As the running back position is losing value in terms of high draft selections, it’s tough to gauge where Hubbard will be selected. I do have him ranked as one of the top three running backs prospects heading into the year and hopefully he can continue to rise up boards.

It’s easy to see that Chuba Hubbard is a former sprinter when you watch him on the football field. There are very few players at any level that will be able to keep up with him, which makes him that much more dangerous. A three-time national champion 100 meter sprinter for his age group, Hubbard has that second gear once he sees green grass in front of him that enables him to take any carry all the way to the end zone. He will always have a place in the NFL as long as he has his elite speed, as the need for home run hitters are an offensive coaches dream.

For being such a speedy back, Chuba Hubbard displays great vision and feel for the game. Oklahoma State runs a lot of outside zone, which perfectly fits Hubbard’s style (more on this later). He lets his blockers dictate where he needs to run and rarely misses any open holes. You’ll never see an elite running back with poor vision as it’s such a crucial part to their success. However, this shows that Hubbard doesn’t rely on just his speed to win, rather he is a complete back.

Many runners think they’ll see an opening and try to run through it with reckless abandon despite it not being the proper read. Chuba Hubbard almost always allows his blockers to set the play up for him and then when he finally gets his opportunity, he goes from 0-100 quick. This is why I feel like he’s best suited for an outside zone blocking scheme, similar to what Shanahan runs in San Francisco. The system allows runners to get outside, gets their blockers on the move, and then allows them to make one cut to get up field. Runners in this system, like Hubbard, need to be patient and trust the guys in front of them. Hubbard also has moments where he reminds me of Le’Veon Bell, who is known as a very patient runner, where he will take his time behind the line of scrimmage before taking off upfield.

Ability in the passing game

Anyone who is a football fan knows that the NFL is more reliant on the passing game now than ever before. While he is a prolific runner, Hubbard isn’t great in the pass game at this point in his career. He did have 23 catches this past year, but mostly on off dump-offs that required minimal route running. Then, as a pass-blocker, I’m not sure if he just doesn’t care or simply isn’t physical enough, but it was tough to watch at times. He just looks overall out of sync and uncomfortable when the ball isn’t in his hands. The pass catching part I’m not overly worried about, but the blocking needs to be coached up. No team will trust him on third down trying to protect their most valuable asset if he can’t pick up a blitzer.

While he does have a lot of carries over the past two years, he has nine fumbles which is way too many. He averages a fumble every other game and while only two of those nine have been recovered by the other team, he needs to work on this. Many running backs have overcome fumbling issues early in their careers and, like Tiki Barber claimed, it’s a small technical issue that is easily fixable.

Is this a negative or positive? Depends on who you ask. In my eyes, his 452 rushing attempts (and counting) could limit his longevity, as running backs careers are getting shorter and shorter. Does this affect him on his rookie contract? I would say no. But thinking for the future, it’s something to keep in the back of your head. This doesn’t affect his draft stock in my eyes, but if people were talking about it with Jonathan Taylor this past year, they’ll be saying the same with Hubbard.

Hubbard will be more valuable for teams that run a more balanced offense and don’t overly rely on the pass. I still think he would do best on an outside zone offense, but any team that runs a lot of stretch plays or tosses will still fit Hubbard’s skill. Teams like the Rams run a stretch based running game where they want their linemen to get out in space before the running back can find a hole. I would suspect he’s more than likely not going to be a first round pick unless he becomes more dynamic as a pass-catcher, but I think he will be a multiple time 1k rusher as long as he can get in the right system.