Najee Harris: From The Bay To Bama 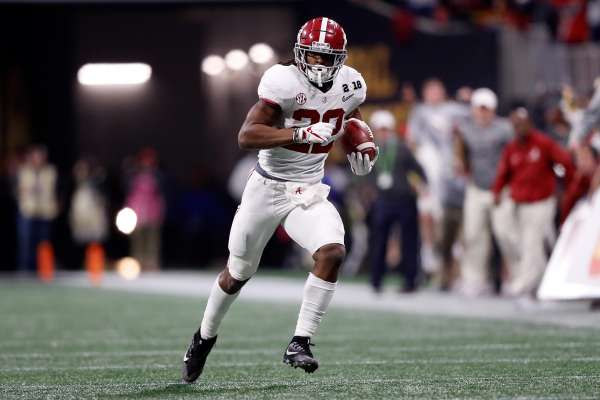 A five-star recruit coming out of high school in Antioch, California, Najee Harris headed to Tuscaloosa to win a national championship and become the next great Alabama running back. While he won a national championship as a freshman, he waited until his junior year to really explode as he rushed for over 1200 yards. Many believed he would declare for the 2020 draft, but he came back to school in hopes of winning his second title. However, as we all know, we don’t know what the hell is going to happen this season.We do know that Najee Harris’s chances of being a high draft pick are pretty good. At this point, he is my top running back in this class and a true three-down player who can play in any scheme.

At 6-2, 230 pounds, Najee Harris is a big man in the backfield and sometimes looks like a man amongst boys. He has no issue running over players, but will also display the athleticism to hurdle over them as well. You’ll quickly become a favorite of the coaching staff if you’re able to break tackles, which is why Harris has seen a good amount of carries every season. He’s one of those guys who’s never truly down until he’s on the ground and will drag multiple defenders with him. I don’t want to be cliché by comparing him to fellow Bay Area native Marshawn Lynch, but they both run with so much force that there are definitely some similarities in the way they run. Don’t think you’ll be able to attempt arm tackles against Harris without him running right past you.

Threat as a pass catcher

Typical power backs like Najee Harris don’t have such soft hands which makes him that much more dangerous. His 27 catches in 2019 may not seem like a high total, but he isn’t given too many opportunities and is part of a running back by committee at Alabama. When he was thrown the ball however, he displayed nice hands and great route running. It wasn’t always dump-off passes he was catching either. He ran out routes and wheel routes to perfection. It’s interesting to see a guy of his stature be such an excellent pass catcher because oftentimes big college running backs are much further behind in development as a pass-catcher than the smaller and more nimble running backs. He’s a true three-down player.

While he might not be the most explosive athlete, Najee Harris makes up for that with excellent vision. He knows how to properly read his blockers in front of him and diagnoses when to bounce outside or cut it up field. He never seems to be in a rush when the ball is in his hands, which he plays to his advantage. The SEC is known as the strongest football conference and, in particular, the strongest defensive conference in the country. So the skills he’s developed, like his vision, are key to his success at the next level.

When you’re a tall running back, the chances of you running high are almost a certainty. Even productive running backs, like former Alabama stud Derrick Henry, have trouble with pad level but it doesn’t affect their overall game. What running high does is leave you susceptible to more punishment in the middle of your body as well as allowing defenders more room to hit you. Like I said, this isn’t a death sentence on his career, but it’s not ideal.

For a player of his size and strength, Harris should be an excellent pass blocker. However, Harris has struggled on several occasions and put his quarterback in harm’s way. To me, it looks like a problem with being flat-footed and not attacking the blitzer. Rather he lets the defender get too close where they can bull rush him or make one move to get around. To be honest, not many college running backs are good at this, so there is hope for improvement. This is a skill that’s worked on over and over again at the professional level as the league is relying more than ever on the passing game.

While Harris might run through you or even over you, he’s not going to outrun your defensive backs or even linebackers. He has good enough agility and probably has a good enough 10-yard split, but he doesn’t have that breakaway speed. Many of the all-time greats didn’t have that explosiveness and had incredible careers. When you have other skills like Harris does, you’ll be fine in the long term and can get away without being a home run threat every time you touch the ball.

Of any running back I’ve looked at until this point, none have the pure power Harris possesses but that isn’t what makes him so special. It’s the fact that he can run so angry, yet be such a developed runner and pass catcher that makes him as pro-ready as they come. Personally, I don’t think he has much more to improve upon at the college level but can’t blame someone for wanting to get that second ring. I think barring any unforeseen circumstance, he’ll be at worst a second-round pick and figures to be a scheme-versatile player.