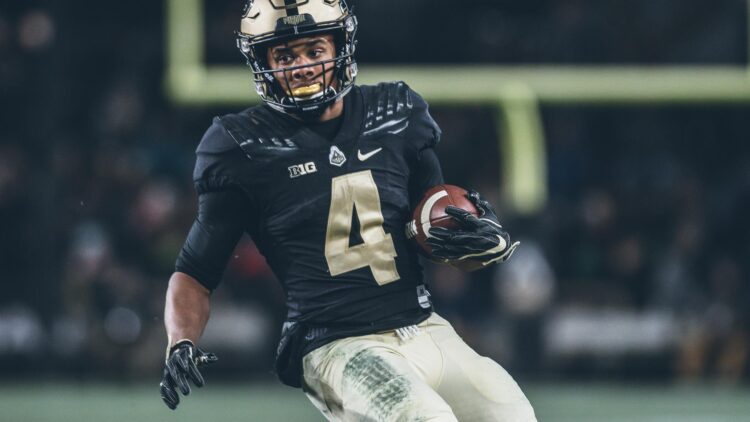 One of the breakout stars of the 2018 college football season was Rondale Moore, a small yet explosive receiver from Purdue. He took home various awards, including being a consensus All-American and the Big Ten Freshman of the year. Unfortunately, he suffered a relatively serious hamstring injury that cut his 2019 season down to just 4 games. As a result, the Boilermakers struggled mightily on offense and could not replace his production. Before the Big Ten decided to cancel the 2020 season, Rondale Moore elected to opt-out and prepare for the 2021 draft. While it may end up being the wise decision for him to rest his body and prevent any future injuries, there’s still a lot of question marks for his game. When he’s on the field, he’s like a cheat code and is incredibly exciting to watch. However, he’s small and missed a large part of a season so there are plenty of questions about his durability.

It’s obvious to see from his film that Rondale Moore is fast, but what sets him apart is how well he can control his body. What I mean by that is on one play he can juke you out of your shoes and the next can break a tackle from a guy who has forty pounds on him. When it comes to making cuts and being able to stop on a dime, he is one of the best I’ve ever seen do it at the college level. Seriously, there are times where I think I’m watching Reggie Bush in his USC days when I’m watching Moore. He’s truly an exceptional athlete who does stuff that most football players are not able to do.

Because of his athleticism, Rondale Moore is dynamite after the catch. Whenever the ball is in his hands, there’s a legitimate chance that he takes it to the end zone. He’s able to find open space with ease and has no problem using one of his many tricks to break away from defenders. Because he’s on the shorter side, he’s able to use his low center of gravity to run through defenders. A fearless runner, I was surprised to see amount of tackles he broke because he ran physical and unafraid. Of course, he will most likely be effective at the NFL level because of his speed and shiftiness but his ability to get past you in several ways is impressive.

Some may think Rondale Moore being a slot only guy is a negative, but the way he operates from the position makes him so valuable. He runs great routes and is willing to work all three levels of the field. From the slot he will run a lot of jet sweeps that can open the play-action game. He’s probably too small to play as a boundary receiver, but with a creative play-caller who will use him in motion to get him out of press coverage, he could thrive in any system. There’s no route he can’t run and in particular, he’s a machine over the middle of the field on crosses and slants.

Listed at 5-9, 180 pounds, Rondale Moore is very undersized. He may be able to add some muscle, which would go a long way to his longevity, but he has to make sure he doesn’t lose any speed. There are a few times you’ll see him take a big hit and in the NFL, the guys are only bigger and stronger. Like I said earlier as well, he won’t win often in press coverage because he’s just not strong enough nor has the length to battle off the line with bigger corners. This is why he’s not seen as a top 15 pick as it’s tough to draft a receiver early who might not be able to be physical enough to battle with 6-2 defensive backs.

He only played in four games in 2019 because of a hamstring injury. While you can’t totally predict if a player will get injured at the professional level (look at Frank Gore who went through two major surgeries in college and is still playing today), but the fact you missed over half a season with a hamstring injury isn’t a good sign. I hope he uses this time to prepare for the draft to get stronger and take care of his body because it would be a shame to not see this guy healthy on Sundays.

In what looks to be a very strong wide receiver class, Moore comes with some baggage but also does things that the others can’t do. He’s such a special and exciting player, that all it would take is one catch or carry for him to change the outcome of a game. Assuming he stays healthy, I think he can have a long career working out of the slot. The health part is huge though. Will he end up like Tavon Austin or end up like Tyreek Hill? I don’t have that answer, but I’m willing to bet he’s right in the middle of the two. I’d love to see him in a more spread system or with a creative play-caller who will utilize him on jet sweeps and screens.