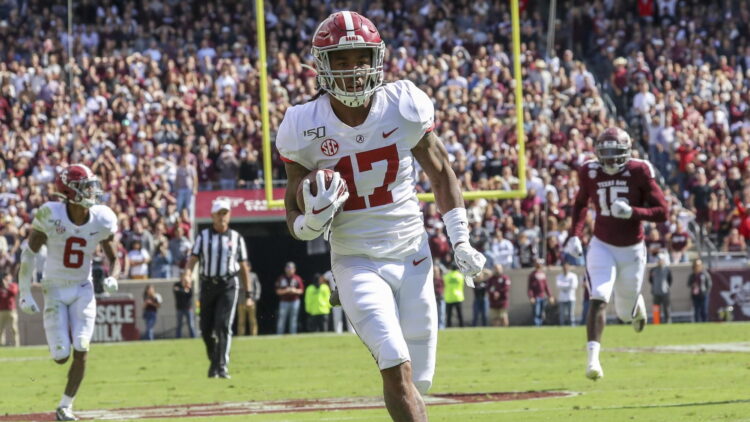 Alabama is quickly becoming the best wide receiver factory in the nation. The Crimson Tide had two receivers (Henry Ruggs and Jerry Jeudy) drafted in the first round last year and will likely have two more being drafted this year (Jaylen Waddle and Devonta Smith). Based on my research, that’ll be the first time ever that four receivers from the same school have been drafted in the first round over a two year period. While all four of these guys are special talents, Jaylen Waddle might end up being the biggest playmaker of the bunch. While he wasn’t used a whole lot in his first two years, he exploded as a Junior and showed just what he can do. Before sustaining an injury, he was the best receiver in college football and proved that he has what he takes to be drafted higher than any of his former teammates.

Many will associate speed with automatically being a deep threat, but there are more aspects to Jaylen Waddle’s game that set him apart from the other speedsters. He is a smooth route runner who excels at making the defenders bite on a double move. Since you have to respect his playmaking ability, you don’t want to give him too much cushion underneath. Also, Jaylen Waddle is elite at being able to track and attack the ball in the air. Because of this, he’s going to come down with the catch or at worst draw a flag.

Waddle is as fast, if not faster (depending on who you ask), than former Alabama receiver Henry Ruggs, who ran a 4.27 40 time. So that means that Waddle is a legit 4.2 receiver, making him immediately one of the fastest players in the league as a rookie. He has impressive straight-line speed, but what impresses me most is his change of direction speed. Meaning that when he makes a cut or jukes, he’s not losing that much from his sprint speed. Tyreek Hill is one player that comes to mind that has this similar talent.

Creative with ball in his hands

Waddle isn’t a guy you’re just going to tell to go deep. Rather, you’re going to find creative ways to get him the ball. Whether it’s on special teams, screens, or handoffs, Waddle has to become a focal point of your offensive game plan. I completely understand why coaches are hesitant to put star players as kick or punt returners, but it’s such an underutilized weapon. Throw Waddle back as a punt returner once or twice a game and I guarantee you’ll get some sort of impact more often than not. Now of course Waddle did sustain a serious injury returning a kick off so maybe I’m the crazy one.

Waddle is 180 pounds soaking wet, meaning the physicality of NFL defenders will at times give him trouble. Receivers built like Waddle are also more likely to sustain injuries over the course of a 16 game season. He’s still a young enough guy where he can develop more muscle mass once he matures.

When you draft Waddle in the first round, you don’t draft him to be a blocker. His lack of size is evident when trying to block a defensive back and often times he just can’t keep them in front of him. I’m not overly worried about this because it’s not his game, but something to keep a note of.

Coming off a serious injury

Waddle underwent surgery on his ankle in October which ended his season. His pre-draft medicals will be important to see how this injury recovers. One injury isn’t bad, but a second one raises more questions than answers.

Waddle is the second-best receiver in the 2021 draft class right behind Ja’Marr Chase. However, at this point last year Henry Ruggs wasn’t seen as the top receiver and saw a steady rise to the top. Ultimately, teams value speed in such high regard that Waddle might become a top-ten pick. In terms of fit, teams like Detroit and New England need receivers, but a team like Miami is interesting. Pair him with Tua and a vertical offense and sit back and watch the fireworks.