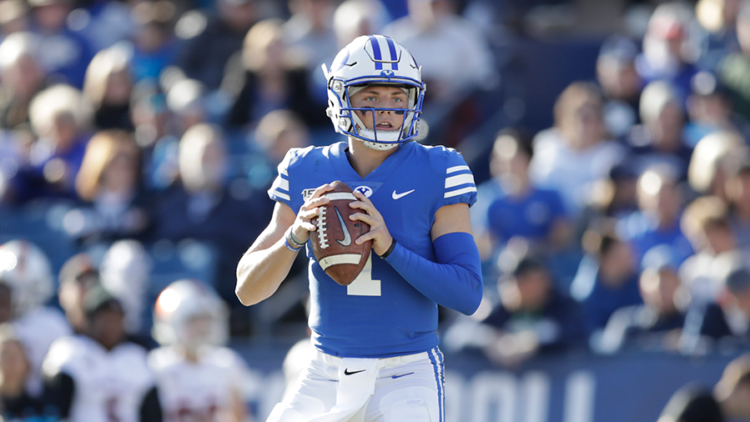 BYU entered the 2020 football season with as many questions as anyone else in the country. Sure, every school has had to deal with unforeseen issues regarding the COVID pandemic, but most got to make decisions as a conference. Meanwhile BYU, as an independent, had to put together a makeshift schedule and in return has had one of the best seasons in recent history for the program. The leader of the Cougars renaissance? None other than quarterback Zach Wilson aka “The Mormon Manziel”. After two pedestrian seasons, Zach Wilson has captivated the college football landscape with breath-taking plays that you don’t see too often at any level of football. Not much of a prospect just a few months ago, Wilson now appears to be a first-round lock and just might climb his way into the top five.

Nobody, and I mean nobody, throws a better deep ball this year in college football better than Zach Wilson. He has great timing with his receivers and perfectly leads them when needed. Often he was throwing into tight windows and placed the ball only where his guy could come down with it. It’s one thing to have the arm talent (which we will get to later) but that is useless unless you can get it to your receivers. Wilson is completing an impressive 73% of his passes on the year, but what makes it even more outstanding is that he’s averaging 11.1 yards per completion. Many times you could argue that stats don’t tell the full story, but they truly show how great Wilson has been as a passer this season.

Despite coming off of shoulder surgery, Zach Wilson’s arm strength has never been better. Several times throughout the season he has thrown the ball in the air over fifty and sixty yards while making it look relatively easy. Also, he’s able to throw strikes on the move or when his feet aren’t set. Having a strong arm doesn’t necessarily mean success in the NFL, but when you look at many top quarterbacks in their prime, they typically can push the ball and make throws that most can’t.

Zach Wilson’s craftiness is where I think he channels his inner Johnny Manziel. He’ll throw from a few different arm slots when needed and can escape the pocket to make some improbable throws. We see Patrick Mahomes do an excellent job of throwing from different angles to get the ball out in the face of pressure and Wilson has that same ability.

While Wilson is never going to win many foot races like a Lamar Jackson or Kyler Murray type player, he has plenty of mobility to make himself a dual-threat. BYU runs a decent amount of read options where Wilson can make big chunk plays with his legs. As evidenced by his 13 career rushing touchdowns (8 this season), any team that doesn’t respect his running ability will pay the price. In a time in the NFL where quarterbacks need to find ways to make plays with their legs to extend drives, Wilson’s scrambling will make him popular amongst NFL front offices.

To say that Wilson’s mechanics are slightly unconventional would be an understatement. He plays with such flair and a special uniqueness that it almost looks like he makes things more difficult than it needs to be. He doesn’t set his feet like most quarterbacks and throws from a sort of a three-quarter release. It has worked until this point so there’s no reason to change it, but the NFL is a different game. I would like to see him use his lower body more to drive the ball and to be more accurate outside of the numbers. Particularly keeping his back leg down when he throws and use that to put some more power on his throws.

Anytime you have a somewhat serious injury, it’ll raise some concerns. But for a quarterback to have that injury to his throwing shoulder, it needs to be triple-checked. Wilson tore his labrum and got surgery before the 2019 season. During that 2019 season, it looked like he was still recovering and his play suffered. Yes, he’s fine now but how will that shoulder look 5-10 years from now? I sure as hell don’t know, but your medical staff will have a good idea.

After a solid freshman season, Zach Wilson struggled as a sophomore mightily. Is this season’s success a result of playing lesser competition? Maybe, maybe not. Of course, it doesn’t help when you have your worst game of the year against the best opponent of the season, Coastal Carolina. I think what you see now is more indicative of who he will be in the NFL, but there has to be some concern.

In a draft class full of mystery, Wilson will be right at the top of tough projections. On one hand, he has so much skill and a great feel for the game but on the other not much long-term success. I love his potential and have him ranked as the third quarterback in this class, right above Trey Lance and below Trevor Lawrence and Justin Fields. Lots of teams will be in the quarterback market this offseason, which makes me believe teams will be aggressive in moving up in the draft. Look for teams like Chicago and San Francisco to be one of those teams to move up, but don’t be too shocked if he decides to return for his senior year. He seems to enjoy college life and his teammates. Plus, he would enter the 2022 draft as the odds on favorite to go first overall.