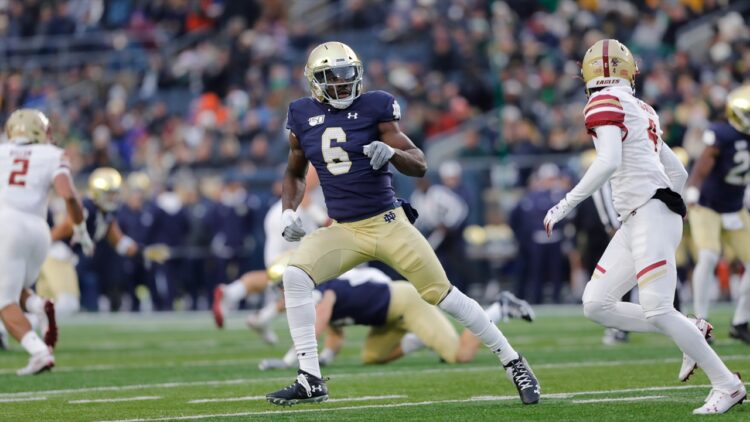 A huge part of the success of Notre Dame this year has been their defense that has made game-changing plays every time they step out on the field. The main cog of that defense is senior linebacker Jeremiah Owusu-Koramoah. Owusu-Koramoah lines up at the rover position (essentially a hybrid linebacker-safety) and has led the Irish in tackles the past two years as a starter. He doesn’t only make an impact in the run game though. He’s one of the best cover linebackers in the nation. Recruited as a safety, Owusu-Koramoah has accepted the challenge of lining up wherever Clark Lea tells him to on defense. This has helped the Irish become the second-best defense in the nation on third down. He’s a fascinating prospect that seems to get better every week and is climbing his way into the first round.

As the NFL becomes more focused on speed and athleticism, a guy like Jeremiah Owusu-Koramoah is a perfect fit. He’s an explosive athlete who can run with most running backs and get into the backfield quickly to make plays. It’s tough for any offensive lineman to get their hands on him as his quickness is rare for a linebacker. He reminds me a bit of Isaiah Simmons, a hybrid LB/S. Wherever you line him up at, he’s going to make plays. He might not be the middle linebacker traditional defensive coordinators desire, but if you utilize him as a chess piece and you’ll watch him make play after play.

The days where linebackers are meant to focus on stopping the run are over. Now, linebackers are asked to play in coverage more than ever and that plays right into Jeremiah Owusu-Koramoah’s game. He came to Notre Dame as a safety, so has exceptional coverage skills for a linebacker. We’ve seen more and more linebackers who are smaller in stature make up for it in their versatility which can keep them on the field against any offensive formation. There were times during the season where the Irish coaches asked Owusu-Koramoah to defend slot receivers and he more than held his own. I think in the NFL he’ll be focused more on defending tight ends and running backs, which he should be able to do so with great success.

You’d never guess that Jeremiah Owusu-Koramoah is only listed at 216 pounds from watching him play. He will stick his nose into contact and deliver a jarring hit at a moment’s notice. Since he plays so fast (to a fault sometimes), he’s able to get downhill quickly to the point where the ball carrier is a sitting duck. Running into him is almost like running into a brick wall.

Because he plays so fast and tries to go for the splash plays, there are a good amount of times where he looks out of control. Any football player, particularly on the defensive side, has to be able to be in control of their speed and athleticism or they will be exposed. Owusu-Koramoah misses tackles due to his over-pursuing of the ball carrier that results in his teammates being put in a position to clean up his mess. Hopefully, as he matures and develops as a linebacker, he will be able to break down better on his tackles and play with control.

Where does he play?

Linebacker? Safety? Hybrid? Whoever is his defensive coordinator has to have a plan on how to utilize him. We saw Isaiah Simmons in Arizona get off to a slow start because the coaching staff didn’t have a plan for him and are just trying to develop him into their mold of a linebacker. That’s not how the NFL operates anymore. If you have the athletes, put them in a position where they will succeed. I hope he ends up on a team where he won’t be stuck with outdated NFL schemes. Can’t fit a square peg into a round hole.

Players like Jeremiah Owusu-Koramoah are becoming the prototype in the NFL. He may not have a true position per se, but makes an impact whenever he’s on the field. Isaiah Simmons, Jeremy Chinn, and Kyle Dugger were drafted in the first two rounds last year and have a similar skill set to what Owusu-Koramoah can offer. He may be a bit undersized to be a traditional linebacker, but can hold his own against the run and excel in coverage. I think it’s safe to consider him a first-rounder at this point with his sweet spot being between 20-32. Of course, linebackers aren’t normally highly regarded in the draft so he could slip into the second round but think he’ll get meaningful playing time as a rookie.