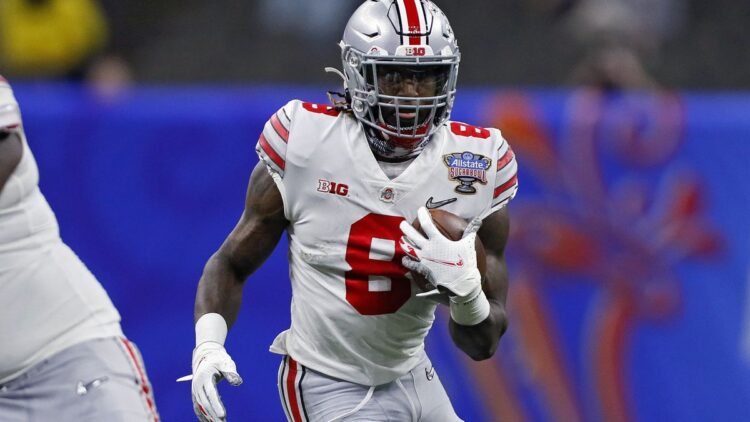 In advance of the College Football Championship, here is our Trey Sermon scouting report. Trey Sermon started his career with a bang at Oklahoma. Sermon was the 2017 Big 12 Offensive Freshman of the Year after rushing for over 700 yards. After a solid sophomore season, he lost touches as a junior and tore his ACL relatively early in the season. He decided to transfer to Ohio State for his last season, hoping to become more of a focal point in an offense that likes to run the ball. After splitting carries for most of the season with Master Teague, Sermon has exploded in December. Sermon torched Northwestern and Clemson for a combined 524 yards rushing which is 60% of his rushing yards for the whole season. As a pro prospect, will we see this version of Sermon or the version we saw his first three and a half years as a college player?

While I don’t think Trey Sermon is going to have a blistering 40 time, he displays impressive short-area quickness. When he sees the hole open, he doesn’t dance and his first few steps help him get past defenders. We’ve seen successful running backs in the past run pedestrian 40 times, but have a quick 10-yard split. That is the more important stat to judge the position because that initial burst is what gets running backs into the open field. You may not see Sermon have many huge runs in the NFL, but he’ll be able to gash defenses with solid gains if given the room to run.

At 220 pounds, Trey Sermon is a pain to try and tackle. Anytime you try to bring him down with an arm tackle, he’s just going to run right through it. Even if you do get in front of him and wrap up, he has the strength to run a guy over and get a few extra yards. Sermon has consistently displayed his tough running over the years but seems to be getting stronger as the season goes on. When defenses are tired and banged up, a battering ram running back is the last thing they want to see.

Trey Sermon doesn’t just bring the thunder when running guys over. He can also juke you out of your shoes. In a one-on-one situation, there were very few times where Sermon didn’t get the best of the defender in space. He’s quicker than linemen and most linebackers (especially in the Big 10 this year) and too big for defensive backs. Most players who are dynamite in space are smaller, shiftier players, but Sermon isn’t built like that. If he can continue this type of play, he will be a dangerous weapon for any NFL offense.

Sermon’s vision, or lack thereof, is what concerns me the most. His success at the end of the season has been impressive, but his offensive line is also playing at a high level. Too many times I saw Sermon miss an open cut-back lane and run straight into the backs of offensive linemen. It could have been a case where he didn’t trust his athleticism as he was recovering from a knee injury, or it may be that he can’t run behind a poor offensive line. Lots of players can succeed when their line is parting the red sea, but the elite ones can create lanes for themselves.

Can he stay on the field on third downs?

I’m not saying that Sermon won’t be able to stay on the field on third down, I’m just saying we don’t know if he can because he’s never been asked to run a real route tree. At Oklahoma and Ohio State, they don’t ask their running backs to do too much in the passing game other than be an outlet or check-down option for the quarterback. In the NFL, the elite running backs are essentially part time wide receivers and have to know how to get open. Also, Sermon doesn’t display much as a pass blocker trying to pick up blitzes. He wasn’t the worst player at this, but he too often missed an assignment or couldn’t block his guy which lead to a quarterback pressure.

Sermon’s recent play has definitely helped him move up draft boards, but is it enough to make him one of the better running back prospects in this class? It’s tough to say right now as a good combine will do wonders for him. I think he’s anywhere from a third to fourth round player. That may not sound promising, but running backs aren’t drafted as early as they once were. I like Sermon in a power run game or even as a single back in a spread scheme. However, you have to rely on your offensive line’s ability to make space for him to operate. Sermon should be able to carve out a role in in the NFL, but may never be a consistent bell-cow back.