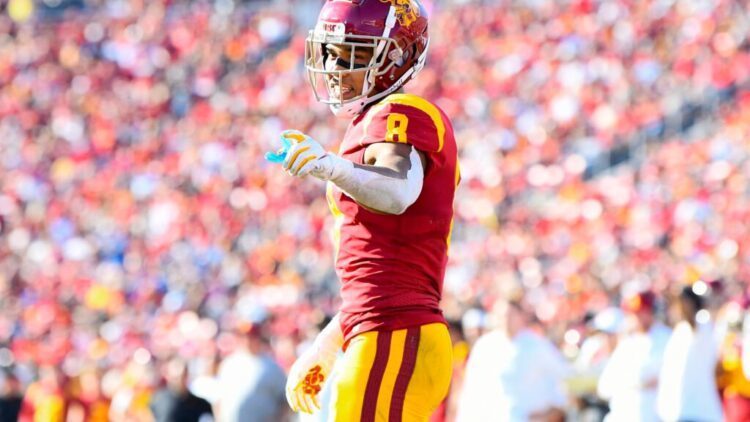 The St. Brown family might be the most athletic bloodline in football. Equanimeous, the eldest brother, is a receiver for the Green Bay Packers. Osiris and Amon-Ra are receivers at Stanford and USC respectively. Their father is a two-time Mr. Universe. Strong genes. However, it’s probably the baby of the family, Amon-Ra, who might be the biggest star of them all. A five-star recruit out of Mater Dei high school, Amon-Ra has been a consistent contributor to the Trojan offense and has shown improvement every year. Due to the Pac 12’s shortened season, he has not gotten the hype like other receivers. He might not be a first-round pick, but could be a day two selection who can step in and produce immediately.

In terms of quickness, St. Brown is one of the best in the draft. He’s able to make one move and get open with ease. His ability to quickly reach top speed is something we see many of the best receivers do well. Nobody will ever call him Tyreek Hill, but both are able to get open based on how fast they are. St. Brown is also a threat with the ball in his hands. After he makes the catch, he’s always looking to turn upfield and make a defender miss. He fits perfectly in a system that gets the ball in his hands and allows him to make plays.

Despite only being 6’1″ and 195 pounds, St. Brown makes a lot of contested catches. He has excellent awareness and tracks the ball well in the air. In the end zone, he attacks the ball and is aggressive at the catch point.

While he got more experience on the outside this year, in 2019 St. Brown did most of his work in the slot. During that season, he had over 1,000 yards and averaged 13.5 yards per catch. Slot defenders typically don’t line up in press coverage, giving a free release to the receiver. A player with the skillset of St. Brown will destroy defenses if he’s given some cushion. If a team is content with letting him develop his overall game and wants to let him play in the slot, St. Brown is an immediate impact receiver as a rookie.

For being as successful as he was, St. Brown dropped way too many passes. The most concerning part of his drops is that it’s happening at all three passing levels. It seems like most of those drops are coming from a lack of concentration rather than a lack of actual skill. This is a troubling trait to see at this stage of his career, but as he develops, we may see him become more consistent here.

If you’re asking him to block or even run through a defender, chances are it’s not going to end well. That’s just not St. Brown’s game and probably never will be. He is a finesse receiver and doesn’t have the physicality to win physical battles with defenders. On most of his blocks, he either whiffed or was bullied backwards. You don’t pay receivers to block, but you’d like to see something from him in that regard.

Can he beat press coverage consistently?

Since he never consistently beat press coverage in college, it’s tough to think it’ll happen in the NFL. He has the quickness to do it, but has to build some more bulk to be able to hand fight at the line of scrimmage. I think he’s best working from the slot which limits his game. That lack of versatility might turn off some teams and limit him in offensive systems.

It seems to me that the national media is sleeping on St. Brown and not giving him the proper credit he deserves. The USC offense has been up and down during his tenure, but when the quarterback position got solidified with Kedon Slovis, St. Brown’s play got better. Funny how that works. He may not be the superstar that many predicted when he was in high school, but at worst he’s a solid slot receiver. Many teams will be in the market for a receiver in the late first-round or early second-round, which is St. Brown’s range. Hopefully, he goes to a team that will properly use his athleticism and RAC ability.