How can the 49ers beat the Packers? 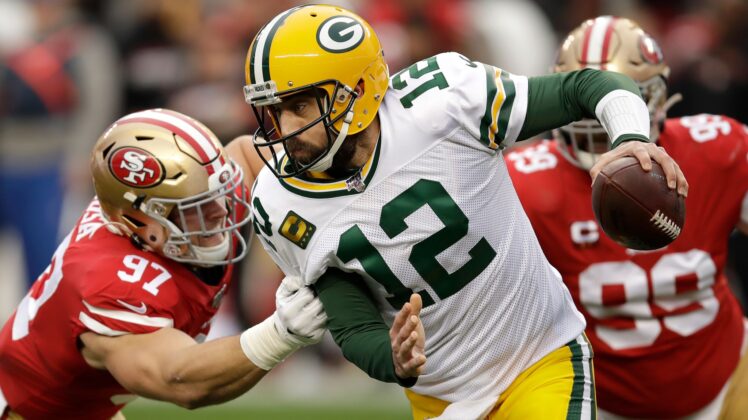 The 49ers vs. Packers in the frozen tundra of Lambeau Field. Honestly, it doesn’t get much better than that. These teams have been a part of some historic playoff matchups in the past and had an instant classic this season where the Packers won 30-28. The last time these two played in the playoffs, it was a thorough ass-kicking from San Francisco and the Packers still have that bad taste in their mouth. I doubt we see that happen again as the 49ers are underdogs this time around. So, what do the 49ers need to do to pull out a win? We break down our five keys to the game:

Prepare themselves for when the Packers “go empty”

In their week three matchup, the Packers exposed the 49ers’ weak secondary and one effective way was when they went in an “empty formation”. For those of you who don’t know what that is, it’s when the offense has nobody besides the running back in the backfield with the quarterback. Of course, Rodgers makes most defenses look bad but he particularly took advantage of the 49ers. Their secondary has gotten better, but to offset the strong San Francisco pass rush, Rodgers will be getting the ball out but attacking down the field. Expect Ambry Thomas to be the focal point, so the rookie will have to continue his streak of strong play.

The 49ers fell behind 17-0 in their first matchup and somehow rallied to take the lead late in the fourth quarter. I doubt they’ll have that luxury this time, so it’s imperative for them to be close or ahead at halftime. I’m not saying they need to go out and dominate like they did in their 2019 NFC Championship matchup, but falling behind just isn’t an option this week. With Garoppolo’s injury and the sub-zero temperatures, throwing the ball will not come easy for San Francisco. The physical run game will be the key to victory and that’s only happening if the game remains close.

Outside of the 2019 NFC Championship game where the 49ers just threw the ball eight times, Kittle has had some success against Green Bay. Outside of that aforementioned game, Kittle has averaged 5 receptions and 83 yards in the other three matchups he’s played against the team he rooted for as a child. However, over the last four games for the 49ers, he hasn’t cracked the 30 yards in any of them. Shanahan will need to utilize play-action attempts to get some high-percentage, short throws to Kittle, and let the big man run.

I know earlier I said that it’s going to be very tough for the 49ers to throw the ball, but the team will still need to take some shots. The Packers are going to stack the box with eight or nine men and dare Garoppolo to throw the ball. They won’t need to throw deep on every series, but they’ll have to set up two or three plays where they test the Packers’ secondary.

Lock in on Adams

Don’t let Adams beat you. That’s what I was yelling during that week three matchup on the last drive and yet Adams brought down two huge receptions to get the Packers in field goal range. While the other Packers’ skill players aren’t pushovers, Adams stands alone in terms of star power. Slowing him down is easier said than down though because every team has this mindset and it hasn’t worked. Whether it’s bracketing Adams with a safety or using an extra corner in coverage, defensive coordinator Demeco Ryans will have to get creative.